Achillea millefolium, commonly known as yarrow /ˈjæroʊ/ or common yarrow, is a flowering plant in the family Asteraceae. It is native to temperate regions of the Northern Hemisphere in Asia, Europe, and North America.[1] It has been introduced as a feed for live stock in places like New Zealand[2] and Australia. However, it is a weed in those places[2] and sometimes also in its native regions.[3]

In New Mexico and southern Colorado, it is called plumajillo (Spanish for 'little feather') from its leaf shape and texture. In antiquity, yarrow was known as herbal militaris, for its use in stanching the flow of blood from wounds.[4] Other common names for this species include gordaldo, nosebleed plant, old man's pepper, devil's nettle, sanguinary, milfoil, soldier's woundwort, thousand-leaf, and thousand-seal.[5] 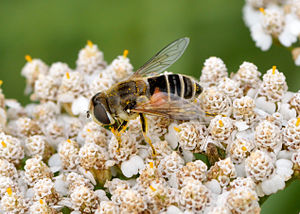 A. millefolium is an erect, herbaceous, perennial plant that produces one to several stems 0.2–1 m (0.66–3.28 ft) in height, and has a spreading rhizomatous growth form. Leaves are evenly distributed along the stem, with the leaves near the middle and bottom of the stem being the largest. The leaves have varying degrees of hairiness (pubescence). The leaves are 5–20 cm (2.0–7.9 in) long, bipinnate or tripinnate, almost feathery, and arranged spirally on the stems. The leaves are cauline, and more or less clasping.[5]

The inflorescence has 4 to 9 phyllaries and contains ray and disk flowers which are white to pink. The generally 3 to 8 ray flowers are ovate to round. Disk flowers range from 15 to 40. The inflorescence is produced in a flat-topped capitulum cluster and the inflorescences are visited by many insects, featuring a generalized pollination system.[6] The small achene-like fruits are called cypsela.[5]

The plant has a strong, sweet scent, similar to that of chrysanthemums.[1]

Yarrow grows from sea level to 3,500 metres (11,500 ft) in elevation. The plant commonly flowers from May through June. Common yarrow is frequently found in the mildly disturbed soil of grasslands and open forests. Active growth occurs in the spring.[1][5]

The plant is native to Eurasia and is found widely from the UK to China.

In North America, both native and introduced genotypes, and both diploid and polyploid plants are found.[7] It is found in every habitat throughout California except the Colorado and Mojave Deserts.[8][9] Common yarrow produces an average yield of 43,000 plants per acre, with a total dry weight of 10,500 lbs.[10]

The plant is found in Australia as an introduction. 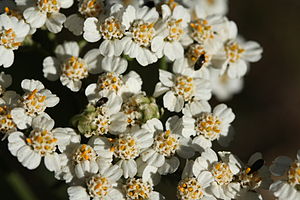 Clusters of 15 to 40 tiny disk flowers surrounded by three to eight white to pink ray flowers are, in turn, arranged in a flat-topped inflorescence (Wenatchee Mountains, Washington). 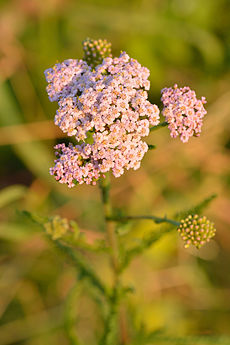 The several varieties and subspecies include: 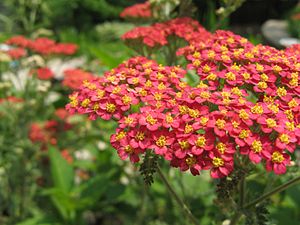 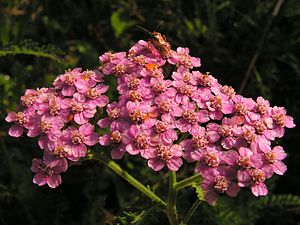 Achillea millefolium is cultivated as an ornamental plant by many plant nurseries. It is planted in gardens and natural landscaping settings of diverse climates and styles. They include native plant, drought-tolerant, and wildlife gardens. The plant is a frequent component of butterfly gardens. The plant prefers well-drained soil in full sun, but can be grown in less ideal conditions.[18][19][20]

For propagation, seeds require light for germination, so optimal germination occurs when planted no deeper than one-quarter inch (6 mm). Seeds also require a germination temperature of 18–24 °C (64–75 °F). It has a relatively short life in some situations, but may be prolonged by division in the spring every other year, and planting 12 to 18 in (30–46 cm) apart. It can become invasive.[21]

The species use in traditional gardens has generally been superseded by cultivars with specific 'improved' qualities.[22] Some are used as drought tolerant lawn replacements, with periodic mowing.[23] The many different ornamental cultivars include: 'Paprika',[24] 'Cerise Queen', 'Red Beauty',[25] 'Red Velvet',[26] 'Saucy Seduction', 'Strawberry Seduction' (red), 'Island Pink' (pink),[27] and 'Calistoga' (white),[28] and 'Sonoma Coast' (white).[29] Several, including 'Kelwayi',[30] and 'Lansdorferglut' (both pink)[31] have gained the Royal Horticultural Society's Award of Garden Merit. The many hybrids of this species designated Achillea x taygetea are useful garden subjects,[32] including: 'Appleblossom', 'Fanal', 'Hoffnung', and 'Moonshine'.[33]

Yarrow is considered an especially useful companion plant, repelling some pest insects while attracting good, predatory ones. It attracts predatory wasps, which drink the nectar and then use insect pests as food for their larvae. Similarly, it attracts ladybirds and hoverflies.[20]

A. millefolium can be planted to combat soil erosion due to the plant's resistance to drought. Before the arrival of monocultures of ryegrass, both grass leys and permanent pasture always contained A. millefolium at a rate of about 0.3 kg/ha. At least one of the reasons for its inclusion in grass mixtures was its deep roots, with leaves rich in minerals. Thus its inclusion helped to prevent mineral deficiencies in the ruminants to which it was fed.

It was introduced into New Zealand as a drought-tolerant pasture. It is very prevalent.[2]

Yarrow has also been used as a food or in teas, and was very popular as a vegetable in the 17th century. The younger leaves are said to be a pleasant leaf vegetable when cooked like spinach, or in a soup. Yarrow is sweet with a slight bitter taste. The leaves can also be dried and used as an herb in cooking.

In the Middle Ages, yarrow was part of an herbal mixture known as gruit used in the flavoring of beer prior to the use of hops.[34] The flowers and leaves are used in making some liquors and bitters.[1]

A. millefolium has seen historical use as in traditional medicine, often because of its astringent effects.[1] The herb is purported to be a diaphoretic, astringent,[35] tonic,[35] stimulant and mild aromatic. It contains isovaleric acid, salicylic acid, asparagin, sterols, flavonoids, bitters, tannins, and coumarins.[citation needed] The genus name Achillea is derived from mythical Greek character, Achilles,[35] who reportedly carried it with his army to treat battle wounds. This medicinal use is also reflected in some of the common names mentioned below, such as staunchweed and soldier's woundwort.[1] 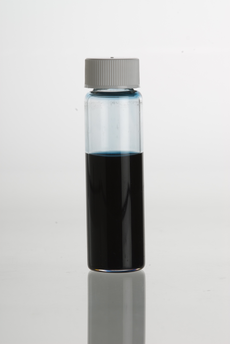 The dark blue essential oil, extracted by steam distillation of the flowers, has been used as an anti-inflammatory[37][non-primary source needed] or in chest rubs for colds and influenza.[38]

The leaves encourage clotting, so it can be used fresh for nosebleeds.[39][unreliable medical source?] The aerial parts of the plant are used for phlegm conditions, as a bitter digestive tonic to encourage bile flow, and as a diuretic.[40][unreliable medical source?] The aerial parts act as a tonic for the blood, stimulate the circulation, and can be used for high blood pressure; it is also useful in menstrual disorders, and as an effective sweating remedy to bring down fevers.[1]

Chinese proverbs claim yarrow brightens the eyes and promotes intelligence.[citation needed] Yarrow and tortoiseshell are considered to be lucky in Chinese tradition.[49]

In classical Greece, Homer tells of the centaur Chiron, who conveyed herbal secrets to his human pupils, and taught Achilles to use yarrow on the battle grounds of Troy.[50]

In the Hebrides a leaf held against the eyes was believed to give second sight.[51]

The stalks are dried and used as a randomising agent in I Ching divination.[52] 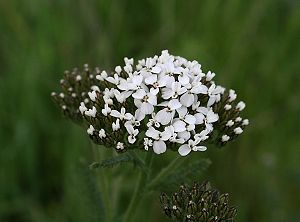 Yarrow and its North American varieties, was used in traditional Native American herbal medicine by tribes across the continent.[53] The Navajo considered it to be a "life medicine", chewed it for toothaches, and poured an infusion into ears for earaches. The Miwok in California used the plant as an analgesic and head cold remedy.[53]

Several tribes of the Plains Indians used common yarrow. The Pawnee used the stalk for pain relief. The Chippewa used the leaves for headaches by inhaling it in a steam. They also chewed the roots and applied the saliva to their appendages as a stimulant. The Cherokee drank a tea of common yarrow to reduce fever and aid in restful sleep.[53]

Among the Zuni people use the occidentalis variety medicinally. The blossoms and root are chewed, and the juice applied before fire-walking or fire-eating. A poultice of the pulverized plant is mixed with water and applied to burns.[54] Recently it was reported that treatment with Achillea millefolium may attenuate disease severity, inflammatory responses, and demyelinating lesions in a mouse model of Multiple Sclerosis.[55]

In rare cases, yarrow can cause severe allergic skin rashes; prolonged use can increase the skin's photosensitivity.[56] This can be triggered initially when wet skin comes into contact with cut grass and yarrow together.

In one study, aqueous extracts of yarrow impaired the sperm production of laboratory rats.[57]

Several cavity-nesting birds, including the common starling, use yarrow to line their nests. Experiments conducted on the tree swallow, which does not use yarrow, suggest that adding yarrow to nests inhibits the growth of parasites.[58]

Its essential oil kills the larvae of the mosquito Aedes albopictus.[59]