From Infogalactic: the planetary knowledge core
Jump to: navigation, search
Not to be confused with Y'all.
This article is about the sailing craft. For the workflow system, see YAWL. 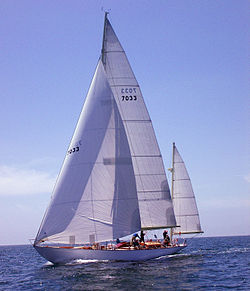 A yawl with jib, main, and mizzen sails flying

A yawl (from Dutch jol) is a two-masted sailing craft similar to a sloop or cutter but with an additional mizzenmast (or mizzen mast) located well aft of the main mast, often right on the transom, or aft of the rudder post if the vessel has an inboard hung rudder.[1] (A vessel with a larger mizzen located in a more forward position is called a ketch; see below: Yawl versus ketch.) The mizzen sail (smaller than the mainsail) is hoisted on the mizzen mast.

The yawl was originally developed as a rig for commercial fishing boats, one good example of this being the Salcombe Yawl (a small traditional fishing boat built in Devon). In its heyday, the yawl's ability to be trimmed to sail without rudder input made it particularly popular with single-handed sailors, such as circumnavigators Harry Pidgeon and Francis Chichester. Modern self-steering and navigation aids have made this less important, and the yawl has generally fallen out of favor.

In the 1950s and 60s ocean racing yawls were developed to take advantage of a handicapping rule that did not penalize them for flying a mizzen staysail, which on long ocean races, often downwind, were a great advantage. A good example of this was Olin Stephens' Finisterre. 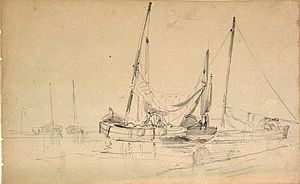 The seminal American yacht designer of the first half of the twentieth century, Francis Herreshoff, reflected this traditional definition of a yawl as "a ship's boat resembling the pinnace" set up to be primarily rowed.[citation needed]

To add a sailing rig to a rowboat, the masts must not interfere with the rowers. The mainmast is placed well forward and the mizzen as far back as possible. The mizzen has to be small in size to keep the sail area balanced around the hull's centre of lateral resistance to ensure the boat will sail in a straight line without excessive correction.

A review of "The L. Francis Herreshoff Collection" [2] would seem to indicate that he had no objection to the forward-versus-aft mizzenmast of the rudder-post definition, since he consistently used it in his own work.

Both the yawl and the ketch have two masts, with the main mast foremost. On classic yacht types with long overhangs and inboard rudders, the distinction is simple: a ketch has the mizzen mast forward of the rudder post, whereas on a yawl, it is aft of the rudder post.[1][3] For boats with shorter overhangs or outboard rudders the distinction is more usefully determined by comparing the purposes and relative sizes of the mizzens. Compared to a ketch, a similar size yawl's mizzen sail is much smaller than the main, and is usually situated very far aft, behind the helm station. On a ketch, the principal purpose of the mizzen sail is to help propel the vessel as part of the working sail, the sail area being split up between two masts to ease handling. On a yawl, the smaller mizzen mainly serves the purposes of trim and balance, working more as an "air rudder" or trim tab than as a substantial part of the working sail. Yawls tend to have mainsails almost as large as those of sloops of comparable sized hulls. 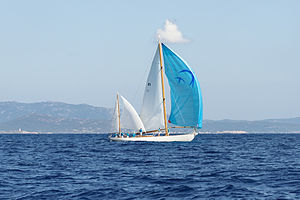 The common definition of Yawl and Ketch using the rudder post does not reflect the nautical tradition and was created by much more recent developments of a handicap system for racing yachts.

The CCA (Cruising Club of America) rating rule was developed following World War II to allow different styles of boats to race against each other with a handicap calculated from measurements of each boat. It was later combined with the RORC (Royal Ocean Racing Club) rule to become the IOR (International Offshore Rule) rule in the late 50s which was used to handicap international racing until the late 1980s.

The CCA and the following rules used the rudder post definitions of ketch and yawl so they had a cut and dried definition for measuring sail so boats could be handicapped with boats fulfilling their new and arbitrary definition of Yawl and Ketch receiving slightly different handicaps.

"Canoe Yawls" have a pointed stern similar to a canoe. Rudders were usually placed on the back of the boat which allows the rudder to be raised to allow the boat to be landed on a beach.