From Infogalactic: the planetary knowledge core
(Redirected from Yester)
Jump to: navigation, search

Gifford /ˈɡɪfərd/ is a village in the parish of Yester in East Lothian, Scotland. It lies approximately 4 miles south of Haddington and 25 miles east of Edinburgh. 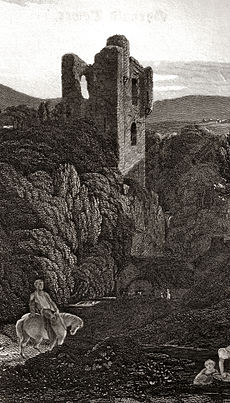 The village takes its name from the 13th-century Sir Hugo de Giffard of Yester, whose ancient Scoto-Norman family possessed the baronies of Yester, Morham, and Duncanlaw in Haddingtonshire, and Tayling and Poldame in the counties of Perthshire and Forfar.[1]

The first Hugo de Giffard's grandson, Hugh de Giffard, was a noted magician[2] who built Yester Castle (half a mile south-east of the present-day Yester House), the ruins and an underground chamber (the 'Goblin Ha') of which can be seen in Yester Wood. The same Hobgoblin Hall featured in the poem "Marmion" by Walter Scott.[3]

The Mercat Cross was built in 1780 and is still standing in the centre of the village.[4]

The initial chief industry in the town was the paper mill, which was once the source of the Bank of Scotland's bank notes. However, this mill closed in the late 18th century and since then the village has largely been residential and supported local farming communities, although a pottery, known as Castle Wynd Pottery, operated at Gifford for a short time in the 1950s.

The earliest recorded presence of a church in the area is in 1241, the ruins of which lie in the woods beside Yester House, to the south-west of the village centre. A church also once stood at Duncanlaw, a former settlement to the south-east of the main village. The present building (in the centre of the village) was built in 1710.[5] 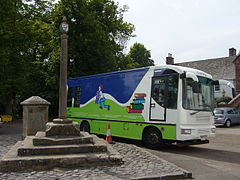 Gifford was the terminus on a branch railway which was originally intended to extend to Garvald and was built by the Gifford and Garvald Light Railway Company. The company seal, which features the Mercat Cross, is in the Glasgow Museum of Transport. The line was operated by the North British Railway and then the London and North Eastern Railway. The section of line to Gifford was closed in 1947, following the loss of a bridge washed away by flooding. British Railways operated the line as far as East Saltoun until the Beeching cuts of the 1960s.

The village has a school, church, several shops, two traditional hotels and a garage. A bus service, operated by Prentice Coaches, connects the village to Haddington and Pencaitland.

Like the church, the school takes the name of the parish, as Yester Primary School. The current school building was built in 1968, when East Lothian County Council reorganised schooling arrangements in the area. Yester Primary was expanded to accommodate children from the small schools in Bolton, Morham, Garvald and Longyester, which were all closed between 1968 and 1971. The school roll in recent years has been around 150 pupils, plus up to 40 children in the attached nursery. Secondary education is provided at Knox Academy, in Haddington.

A large park (known as the Bleachfield, from its historic use) lies near the centre of the village, and the East Lothian Core Paths network has been expanded to improve access to the surrounding countryside. The village has two golf courses. Gifford Golf Club is on the western edge of the village, while Castle Park Golf Club is to the south. The Gifford Cup is an annual golf event, which is held in alternate years between the two courses.