Malmsteen was born Lars Johan Yngve Lannerbäck in Stockholm, Sweden, the third child of a musically talented family.[1] Malmsteen has stated that Jimi Hendrix had no musical impact on him and did not contribute to his style, but watching the 18 September 1970 TV special where Hendrix smashed and burned his guitar made Malmsteen think, "This is really cool".[2] To quote his official website, "The day Jimi Hendrix died, the guitar-playing Yngwie was born".[3] At the age of 12 he took his mother's maiden name Malmsten as his surname, slightly changed it to Malmsteen, and altered his third given name Yngve to "Yngwie". Malmsteen created his first band "Track on Earth" at the age of 10, consisting of himself and a friend from school on drums. As a teenager, he was heavily influenced by classical music, particularly 19th century violinist composer Niccolò Paganini,[4] and also discovered his most important guitar influence, Ritchie Blackmore. Uli Jon Roth is also cited as a significant influence, as is Brian May.

In early 1982 (at the age of 18), Mike Varney of Shrapnel Records, who had heard a demo tape of Malmsteen's playing from the 1978 titled Demo Powerhouse, brought Malmsteen to the United States. He played briefly with Steeler, part of their 1983 self-titled album, then appeared on Graham Bonnet's album Alcatrazz, their 1983 debut No Parole from Rock 'n' Roll, and the 1984 live album Live Sentence. Malmsteen released his first solo album Rising Force in 1984, which featured Barrie Barlow of Jethro Tull on drums and keyboard player Jens Johansson. His album was meant to be an instrumental side-project of Alcatrazz, but it contained vocals, and Malmsteen left Alcatrazz soon after the release of Rising Force.

Rising Force won the Guitar Player Magazine's award for Best Rock Album and was nominated for a Grammy for 'Best Rock Instrumental', achieving No. 60 on the Billboard album chart. Yngwie J. Malmsteen's Rising Force (as his band was thereafter known) next released Marching Out (1985). Jeff Scott Soto filled vocal duties on these initial albums. They recruited drummer Anders Johansson and bassist Marcel Jacob to record and tour with the band. Marcel left in the middle of a tour and was replaced by Wally Voss. His third album, Trilogy, featuring the vocals of Mark Boals, was released in 1986. Yngwie played the bass on this album himself. In 1987, another singer, former Rainbow vocalist Joe Lynn Turner joined his band as well as Bob Daisley on bass. That year, Malmsteen was in a serious car accident, smashing his V12 Jaguar E-Type into a tree and putting him in a coma for a week. Nerve damage to his right hand was reported. During this time, Malmsteen's mother died from cancer. In April 1988 he released his fourth album Odyssey. Odyssey was his biggest album so far, in part due to the success of its first single "Heaven Tonight". Shows in Russia, Soviet Union, during the Odyssey tour were recorded, and released in 1989 as a fifth album Trial by Fire: Live in Leningrad. The classic Rising Force lineup with Yngwie, Jens and Anders split in 1989 when Jens joined Dio and Anders Blue Murder.

Malmsteen's Neo-classical style of metal became popular among some guitarists during the mid-1980s, with contemporaries such as Jason Becker, Paul Gilbert, Marty Friedman, Tony MacAlpine and Vinnie Moore becoming prominent. In late 1988, Malmsteen's signature Fender Stratocaster guitar was released, making him and Eric Clapton the first artists to be honored by Fender.

In the early 1990s, Malmsteen released the albums Eclipse (1990), The Yngwie Malmsteen Collection (1991), Fire & Ice (1992) and The Seventh Sign (1994). Despite his early and continuous success in Europe and Asia, by the early 1990s heavy metal styles such as neoclassical metal and shredding had gone out of fashion in the US.

In 1993, Malmsteen's future mother-in-law – who opposed his engagement to her daughter – had him arrested for allegedly holding her daughter hostage with a gun. The charges were later dropped.[5] Malmsteen continued to record and release albums under the Japanese record label Pony Canyon, and maintained a devoted following from fans in Europe and Japan and, to a lesser extent, in the USA. In 2000 he signed a contract with the US record label Spitfire, and released his 1990s catalog on the US market for the first time, including what he regards as his masterpiece, Concerto Suite for Electric Guitar and Orchestra, recorded with the Czech Philharmonic Orchestra in Prague.

In the mid 90s, Malmsteen released the albums Magnum Opus (1995), Inspiration (1996), Facing the Animal (1997), Double LIVE! (1998) and Alchemy (1999). In 1996, Malmsteen joined forces with former band members Jeff Scott Soto and Marcel Jacob on the Human Clay album where he played lead guitar on the track "Jealousy". He guested with Saxon on the song Denim And Leather on their live album The Eagle Has Landed – Part II. Yngwie recorded a few tracks with his former band members Jens Johansson and Anders Johansson on their album "Johansson/Sonic Winter", called "Enigma suite" and "All opposable thumbs". 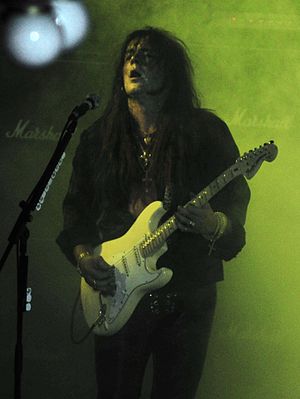 After the release of War to End All Wars in 2000, singer Mark Boals left the band. He was replaced by former Rainbow vocalist Doogie White, whose vocals were well received by fans. In 2003, Malmsteen joined Joe Satriani and Steve Vai as part of the G3 supergroup, a tour showcasing guitar performances. Malmsteen made two guest appearances on keyboardist Derek Sherinian's albums Black Utopia (2003), and Blood of the Snake (2006) where Malmsteen plays on the same tracks as Al Di Meola and Zakk Wylde. In 2004, Malmsteen made two cameo appearances on Harvey Birdman, Attorney at Law. In 2005 Unleash the Fury was released through Spitfire Records. As stated in an issue of "Guitar World" magazine, he titled this album after an infamous 'airline incident', which occurred on a flight to Japan during a 1988 tour. He was drunk and behaving obnoxiously, until he fell asleep and was roused by a woman pouring a jug of iced water on him. Enraged, he shouted, "You've released the fucking fury!" The audio from this incident was caught on tape by a fellow band member.[6] Malmsteen says that the name of the album refers to both the energy of the album and the incident.[7] The release of Unleash the Fury was followed by a DVD release of Concerto Suite For Electric Guitar And Orchestra in E Flat Minor, Op. 1 – With The New Japan Philharmonic Live. The DVD chronicles Malmsteen's first time playing in front of a live audience with an orchestra, an experience that he describes as "fun but also extremely scary".[7]

In 2007, Malmsteen was honored in the Xbox 360 version of Guitar Hero II. Players can receive the "Yngwie Malmsteen" award by hitting 1000 or more notes in succession.[8] February 2008, saw the replacement of singer Doogie White with former Iced Earth and Judas Priest and current Beyond Fear singer Tim "Ripper" Owens, with whom Malmsteen had once recorded a cover of Ozzy Osbourne's song "Mr. Crowley", for the 2000 Osbourne tribute album Bat Head Soup: A Tribute to Ozzy. The first Malmsteen album to feature Owens is titled Perpetual Flame and was released on 14 October. On 25 November 2008, Malmsteen had three of his songs ("Caprici Di Diablo", "Damnation Game", and "Red Devil") released as downloadable content for the video games Rock Band Rock Band 2 and later Rock Band 3.

In 2008 Malmsteen was a special guest on the VH1 Classic show "That Metal Show". On 10 March 2009, Malmsteen's label Rising Force has launched his new release Angels of Love, an instrumental album which features acoustic arrangements of some of his best-known ballads. In August 2009, Time magazine named Malmsteen No. 9 on its list of the 10 best electric guitar players of all-time.[9] Malmsteen recently released another album compilation entitled High Impact on 8 December 2009. 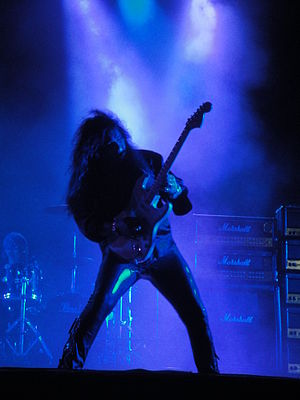 On 23 November 2010 Relentless was released, the second album to feature Tim "Ripper" Owens on vocals. The US version features a remake of "Arpeggios From Hell" as a bonus track. Yngwie appeared on Late Night with Jimmy Fallon along with Dana Carvey on 3 February 2011 to promote his album. On 6 August 2011, Malmsteen made another appearance in the United States, playing a rendition of Star Spangled Banner before a game between the St. Louis Cardinals and Florida Marlins at Sun Life Stadium.[10]

Although rarely seen in his native country Sweden, Malmsteen played one gig in Sweden in 2012. On 7 July, he ended the Getaway Rock Festival in Gävle, which he was headlining together with Nightwish and Manowar.

As of February 2015, Malmsteen has been in the studio working on a new album.[12]

Malmsteen is married to April Malmsteen and has a son named Antonio after Antonio Vivaldi, and they live in Miami, Florida.[13] A Ferrari enthusiast, Malmsteen owned a black 1985 308 GTS[14] for 18 years before selling it on eBay, and a red 1962 250 GTO.[15][full citation needed]

In a 2005 issue of Guitar Player magazine, Malmsteen discussed his often-ridiculed behavior, saying that, "I've probably made more mistakes than anybody. But I don't dwell on them. I don't expect people to understand me, because I'm pretty complex, and I think outside the box with everything I do. I've always taken the un-traveled path. Obviously, people have their opinions, but I can't get too wrapped up in that, because I know what I can do, and I know what kind of person I am. And I have no control over what anybody says about me. Back in Sweden, I'm 'Mr. Personality' in the tabloids. But, obviously, I can't take that seriously. I know in my heart that if I do the absolute best I can do, maybe ten years from now, people may turn around and say, 'He wasn't that bad.'"[16]

Malmsteen has been a longtime user of Fender Stratocasters. His most famous Stratocaster is his 1972 blonde Strat, nicknamed "The Duck" because of its yellow finish and the Donald Duck stickers on the headstock. An alternative nickname for this guitar is "Play Loud" due to a sticker that Anders Johansson put on the upper horn of the guitar in Rockshire studios in 1984. Fender made 100 replica copies of this guitar and marketed it as the "Play Loud Guitar". He also has a signature Stratocaster. It comes in a Vintage White finish with a maple neck, either a maple or rosewood fretboard with scalloped frets and, from 2010, Seymour Duncan STK-S10 YJM "Fury" Model pickups. There is also a signature YJM100 Marshall amplifier, based on the "1959" amplifier range.

Malmsteen has stated that he prefers the Stratocaster (from the period of 1968–1972); he claims that the bigger headstock on these generates more sustain.[citation needed] Malmsteen customizes his guitars by fitting a brass nut, removing the middle string tree and scalloping the fretboard. He previously disconnected the tone controls on his guitars but has said that he no longer does this. Malmsteen now uses his signature Seymour Duncan YJM Fury pickups. Before using the YJM's, he used DiMarzio pickups – most notably the HS3 model and the HS4 model. Malmsteen would use an HS3 in the bridge and two HS4s in the middle and neck positions. In even earlier recordings, Malmsteen instead used the HS3 model in the neck and bridge positions and a disconnected stock Fender single-coil pickup in the middle.

Outside of his Stratocasters, Yngwie has played non-Fender guitars (like Aria Pro II's in the early 1980s) and non-Strat-shaped guitars (like Gibson Flying V's), particularly early in his career. Today, for acoustic and nylon string guitars, Malmsteen uses his signature Ovation YM68's.