From Infogalactic: the planetary knowledge core
Jump to: navigation, search
This article is about the city of Yogyakarta. For other uses, see Yogyakarta (disambiguation).

Yogyakarta (/ˌjɒɡjəˈkɑːrtə/ or /ˌjoʊɡjəˈkɑːrtə/;[1] also Jogja or Jogjakarta, is a city and the capital of Yogyakarta Special Region in Java, Indonesia. It is renowned as a center of education (Kota Pelajar), classical Javanese fine art and culture such as batik, ballet, drama, music, poetry, and puppet shows. Yogyakarta was the Indonesian capital during the Indonesian National Revolution from 1945 to 1949, with Gedung Agung as the president's office. One of the districts in Yogyakarta, Kotagede, was the capital of the Mataram Sultanate between 1575 and 1640. The city is named after the Indian city of Ayodhya from the Ramayana epic. Yogya means "suitable, fit, proper", and karta, "prosperous, flourishing" (i.e., "a city that is fit to prosper").[2] Its population was 388,627 inhabitants at the 2010 census and its built-up (or metro) area was home to, 4,010,436 inhabitants spread on two cities (Yogyakarta and Magelang) and 65 districts spread on Sleman, Klaten, Bantul, Kulon Progo and Magelang regencies. While urbanization sprawls, Yogyakarta-Magelang and Surakarta are being agglomerated in a few years. The Dutch name of the city is Djokjakarta.

According to Canggal inscription dated 732, the area traditionally known as "Mataram" became the capital of the Medang Kingdom, identified as Mdang i Bhumi Mataram established by King Sanjaya. Mataram became the center of a refined and sophisticated Javanese Hindu-Buddhist culture, for about three centuries its heartland in Kewu Plain (southern slope of Mount Merapi) around Prambanan witnessed the construction of numerous candi including Borobudur and Prambanan.

Around the year 929, the centre of the kingdom was shifted to East Java by Mpu Sindok, who established the Isyana Dynasty. The exact cause of the move is still uncertain; however, a severe eruption of Mount Merapi volcano or a power struggle probably caused the move. Historians suggest that, some time during the reign of King Wawa of Mataram (924–929), Merapi volcano erupted and devastated the kingdom's capital in Mataram.

During the Majapahit era, the area surrounding modern Yogyakarta was identified again as "Mataram" and recognized as one of the twelve Majapahit provinces in Java ruled by a Duke titled 'Bhre Mataram'. During the reign of Hayam Wuruk (1350 to 1389), the title of Bhre Mataram was held by king's nephew and son in-law Wikramawardhana. 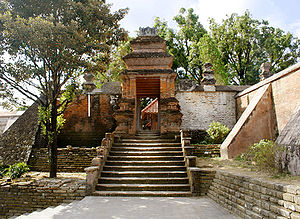 Kotagede (now a district of Yogyakarta) was established as the capital of the Mataram Sultanate. During the reign of Sultan Agung Hanyokrokusumo (1613-1645), the Sultanate Mataram reached its zenith as the greatest kingdom in Java, and expanded its influence to Central Java, East Java and half of West Java. After two changes of capital, (Palace of Pleret and Place of Kerta, both located in Bantul Regency), the capital of Mataram Sultanate moved to Kartasura. 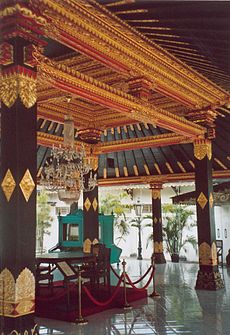 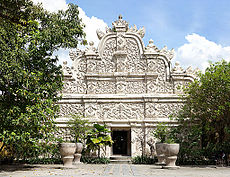 During the British occupation of Java, rumors of plans by the Javanese court to stage a rebellion caused uneasiness among the colonial authorities. On 20 June 1812, Stamford Raffles led a 1,200-strong British force to attack the royal city. The Javanese were surprised by the attack and were easily subdued. In one day the city of Yogyakarta fell, with the city destroyed and its palace looted. The event completely stripped the sultanate of its remaining power and influence.[3] The sack also left the court humiliated and fueled a rebellion which would be known as Java War.

In 1942 the Japanese Empire invaded Dutch East Indies and ruled Java until they were defeated in 1945. Sukarno proclaimed the independence of the Indonesian Republic on August 1945. Sultan Hamengkubuwono IX promptly sent a letter to Sukarno, expressing his support for the newly born nation of Indonesia and acknowledging the Yogyakarta Sultanate as part of the Indonesian Republic. The Sunanate of Surakarta did the same, and both of the Javanese kingdoms were awarded special status as "Special Regions" within the Indonesian Republic. However, because of a leftist anti-royalist uprising in Surakarta, the Sunanate of Surakarta lost its special administrative status in 1946 and was absorbed into Central Java Province.

The area of the city of Yogyakarta is 32.5 square kilometres (12.5 square miles). While the city spreads in all directions from the kraton (the Sultan's palace), the core of the modern city is to the north, centered around Dutch colonial-era buildings and the commercial district. Jalan Malioboro, with rows of pavement vendors and nearby market and malls, is the primary shopping street for tourists in the city, while Jalan Solo, further north, is a shopping district more frequented by locals. At the southern end of Malioboro, on the east side is the large local market of Beringharjo, not far from Fort Vredeburg, a restored Dutch fort.

At Yogyakarta's centre is the Kraton, or Sultan's palace. Surrounding the kraton is a densely populated residential neighbourhood that occupies land that was formerly the Sultan's sole domain. Evidence of this former use remains in the form of old walls and the ruined Taman Sari, built in 1758 as a pleasure garden. No longer used by the sultan, the garden has been largely abandoned. For a time, it was used for housing by palace employees and descendants. Reconstruction efforts began in 2004, and an effort to renew the neighbourhood around the kraton has begun. The site is a developing tourist attraction.[citation needed]

Nearby to the city of Yogyakarta is Mount Merapi. The northern outskirts of the city run up to the southern slopes of the mountain in Sleman Regency (Indonesian language–Kabupaten). Gunung Merapi (literally "mountain of fire" in Indonesian/Javanese), is an active stratovolcano located on the border between Central Java and Yogyakarta, Indonesia. It is the most active volcano in Indonesia and has erupted regularly since 1548. The South Of Merapi is Kaliurang Kaliurang Park. The volcano last erupted in November 2010.

Climate in Yogyakarta features tropical wet and dry climate (Aw) as the precipitation in the driest month, August is below 60 mm. The wettest month in Yogyakarta is January with precipitation total 392 mm. The climate is influenced by the monsoon. The annual temperature is roughly about 26 to 27 Celsius. The hottest month is April with average temperature 27.1 Celsius.

Yogyakarta city is an administrative part of the Yogyakarta Special Region which has the status of a province in Indonesia. The regencies of Bantul and Sleman have population densities far higher than the surrounding countryside (over 1,500 per square kilometer) and are effectively dormitory communities of the greater area of Yogyakarta. Within the greater Yogyakarta area lies the city of Yogyakarta called Kota Yogyakarta.

Yogyakarta City is divided into 14 districts (kecamatan), listed below with their populations as of the 2010 Census:[6]

Yogyakarta attracts large numbers of foreign visitors. However, there are also significant numbers of foreign people residing in the city. Most of them are foreign students that usually stay to learn Indonesian or Javanese culture.

Nine rock sites in the Yogyakarta area have been declared as geoheritage sites.[8] 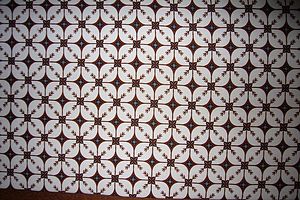 Kawung Motif in batik from Yogyakarta. 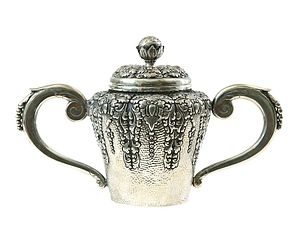 Some of the famous cultural aspects of Yogyakarta are:

Yogyakarta has several historical tourist attractions as the Candi Prambanan temple, museums in the royal court, and museums in colonial buildings such as the Fort Vredeburg Museum, a former Dutch fort. Due to the importance of Yogyakarta during the war of independence from the Dutch, there are numerous memorials and museums such as the Monument to the Recapture of Yogyakarta. 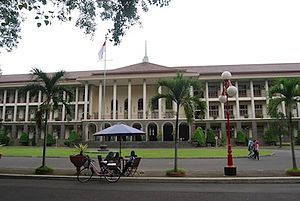 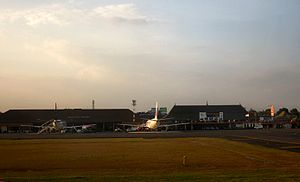 Yogyakarta is served by Adisucipto International Airport which connects the city with other major cities in Indonesia, such as Jakarta, Surabaya, Denpasar, Makassar, Balikpapan, Banjarmasin, Pekanbaru, Palembang and Pontianak. It also connects the city with Singapore (operated by SilkAir and Indonesia AirAsia) and Kuala Lumpur (operated by AirAsia). 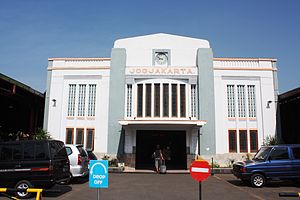 The city is located on one of the two major railway lines across Java between Jakarta / Bandung and Surabaya. It has two passenger railway stations, Tugu railway station which serves business and executive class trains, and Lempuyangan Station which serves economy class trains. Both stations are located in the heart of the city. One commuter train in Yogyakarta is the Prambanan Ekspress, also known as Prameks, which runs from Lempuyangan Station to Solo Balapan Station in Surakarta (Solo) (East of Yogyakarta), Kutoharjo Station in Kutoharjo (West of Yogyakarta). Other commuter trains run from Madiun Jaya (Madiun-Lempuyangan), and Joglosemar (Semarang-Lempuyangan).

The city has an extensive system of public city buses, and is a major departure point for inter-city buses to other cities in Java and Bali, as well as taxis, andongs, and becaks. Motorbikes are by far the most commonly used personal transportation, but an increasing number of residents own automobiles.[11] Yogyakarta also has a highway known as the Ringroad and overpasses including Janti Overpass, Lempuyangan Overpass, and a recently built overpass in the northern part of the Ringroad. 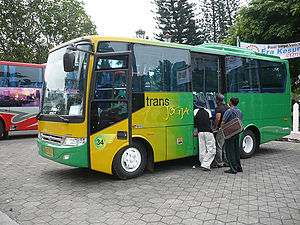 Since early 2008, the city has operated a bus rapid transit system called Trans Jogja, also known as "TJ" (Indonesian), an abbreviation from "T" for 'Trans', and "J" for 'Jogja'. This system is modeled after the TransJakarta system in the capital, but unlike Trans Jakarta, there is no particular lane for Trans Jogja buses; they run on main streets. Currently there are six Trans Jogja lines, with routes throughout the main streets of Yogyakarta, some of which are overlapping. The lines extend from Jombor bus station in the north as far as Giwangan main bus terminal in the south and Prambanan bus shelter in the east via Adisucipto International Airport.

In a 2008 forum discussion on long-term transportation plans in Yogyakarta held at Universitas Gadjah Mada, the head of the Yogyakarta region transportation master plan team, Prof Ahmad Munawar, said that in 2016 modern transport modes including monorail, aerobus, and tram will begin operating in the city and the region.[12] 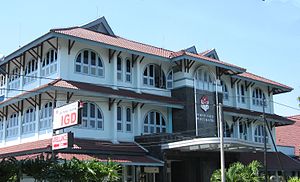 Notable hospitals in Yogyakarta include :