From Infogalactic: the planetary knowledge core
Jump to: navigation, search
This article is about the French department. For the French river, see Yonne (river).

Yonne (French pronunciation: ​[jɔn]) is a French department named after the river Yonne. It is one of the eight constituent departments of Bourgogne-Franche-Comté and is located in the northwest of the region, bordering Île-de-France. It was created in 1790 during the French Revolution. Its prefecture (capital) is Auxerre and its postcode number is 89.

The first evidence of occupation in this area is found in the Grottes d'Arcy-sur-Cure where paintings have been found dating back 28,000 years. The Palaeolithic hunter-gatherers of that time also left behind numerous flint artefacts, but the area is believed to have been occupied for about 200,000 years.[1] By 4000 BC, a wave of Neolithics arrived from the Danube region of eastern Europe building substantial wooden houses and introducing pottery decorated with the characteristics of the Linear Pottery culture. Further waves of immigrants followed, the Chasséen culture, and the Michelsberg culture.[2]

The Celtic tribe in the area were named "Icauna", after the River Yonne which they thought sacred, and the region was later occupied by Gallic tribes. The area then came under the control of the Romans, whose chief town was Sens, which they called Agendicum. It was the capital of their province of Gallia Lugdunensis, one of four provinces into which France was subdivided.[3] The present main roads from Lyon to Boulogne, and from Sens to Alise-Sainte-Reine date from this period. About this time, Auxerre, Tonnerre (Tornodurum) and Avallon were growing in size and in the fourth century, Sens became a walled city, and the first bishops were appointed in Sens and Langres whose power was to influence the region profoundly.[citation needed]

In 1771, the northwesterly part of the present department belonged to Prince Francis Xavier of Saxony, the uncle of Louis XVI of France. The current Yonne department saw its birth during the French Revolution, on March 4, 1790, as a result of the passing of an Act on December 22, 1789.[4] It was carved out of parts of the provinces of Burgundy, Champagne and Orléans, and to a lesser extent from parts of the Nivernais and Île-de-France. 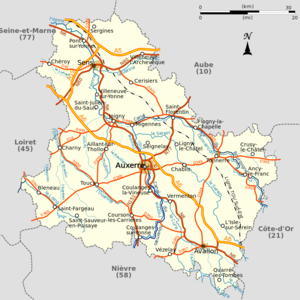 The geology of the department is complex with concentric rings of granite, Jurassic, Cretaceous and Tertiary rocks and layers of sedimentary rocks. The terrain is mostly a low-lying plateau used for agriculture. The southwestern part is the Pays de Puisaye-Forterre at a higher elevation and is more wooded. To the centre and east, the land inclines to the northwest where the higher land of the Tonnerrois region lies. To the east the rock is mostly limestone and the Auxerrois region is renowned for the grapes grown here which are used in the production of Chablis. To the south lies the mountainous massif of Morvan, the highest parts of which are in the neighbouring department of Nièvre.[5] The department has some forested areas but is mainly down to pasture or cultivated for wheat.[6]

Over fifty percent of the inhabitants of the department are engaged in agricultural activities, and it is one of the poorest and most rural departments in France. During the hundred years leading up to 1962, its population declined by around 100,000 while all of the surrounding departments had population growth. Yonne had been bypassed by the development of the railways, and as French industry flourished elsewhere in the late nineteenth century, the young people left Yonne seeking better opportunities, and the department stagnated. The viticulture industry was severely affected by the advent of powdery mildew and the arrival of Phylloxera in the nineteenth century; at the same time, the development of the railway network allowed cheaper wines from other regions to undercut Chablis wine in the Paris market, and the once-thriving industry never recovered.[7] By 1945, only 4000 hectares of grapevines remained and only 471 hectares of grapes were grown for Chablis.[6] More recently, the population trend has been reversed, and during the period 1999 to 2007, rose by 8000 to a total of 341,418. However, with a population of 46 inhabitants per square kilometre, the density in Yonne is less than half that for the whole of France, which was 100.5 for the same year.[8]

It elects three members of parliament to the National Assembly – in the 2012–17 parliamentary term, two of them are drawn from the right-wing Union for a Popular Movement (UMP) and one from Socialist Party (France) (PS). Its two senators also represent the UMP. In 2015, the General Council of the department was allotted a budget of 410 million euros.[9]