Yorkshire pudding is an English side dish made from batter consisting of eggs, flour, and milk or water. The dish is sometimes served with beef and gravy and is a staple of the traditional British Sunday roast. It may also be served as a dessert.[1]

Originally the Yorkshire pudding was eaten on its own as a first course with thick gravy to fill the stomach with the low cost ingredients so that one would not eat so much of the more expensive meat in the following course.[2] An early recipe appeared in William Kenrick's The Whole Duty of a Woman in 1737. 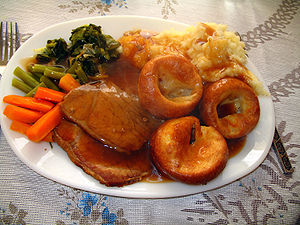 When wheat flour began to come into common use for making cakes and puddings, cooks in the north of England devised a means of making use of the fat that dropped into the dripping pan to cook a batter pudding while the meat roasted. In 1737, a recipe for 'a dripping pudding' (Later named The Yorkshire Pudding) was published in The Whole Duty of a Woman:[3]

Make a good batter as for pancakes; put in a hot toss-pan over the fire with a bit of butter to fry the bottom a little then put the pan and butter under a shoulder of mutton, instead of a dripping pan, keeping frequently shaking it by the handle and it will be light and savoury, and fit to take up when your mutton is enough; then turn it in a dish and serve it hot.

Similar instructions were published in 1747 in The Art of Cookery made Plain and Easy by Hannah Glasse under the title of 'Yorkshire pudding'. It was she who re-invented and renamed the original version, called Dripping Pudding, which had been cooked in England for centuries, although these puddings were much flatter than the puffy versions known today.[4] 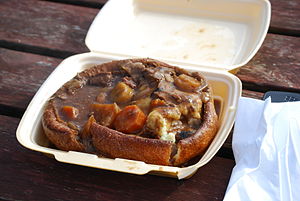 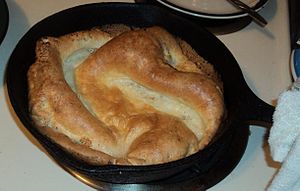 The Yorkshire pudding is a staple of the British Sunday lunch and in some cases is eaten as a separate course prior to the main meat dish. This was the traditional method of eating the pudding and is still common in parts of Yorkshire today. Because the rich gravy from the roast meat drippings was used up with the first course, the main meat and vegetable course was often served with a parsley or white sauce.

It is often claimed that the purpose of the dish was to provide a cheap way to fill the diners, thus stretching a lesser amount of the more expensive ingredients as the Yorkshire pudding was traditionally served first.[6]

In poorer households, the pudding was often served as the only course. Using dripping and blood, a simple, energy-rich meal was made with flour, eggs and milk. This was traditionally eaten with a gravy or sauce, to moisten the pudding.

Yorkshire pudding is cooked by pouring a batter made from milk (or water), flour and eggs into preheated, oiled, baking pans, ramekins or muffin tins (in the case of miniature puddings). A basic formula uses ​1⁄3 cup flour and ​1⁄3 cup liquid per egg. 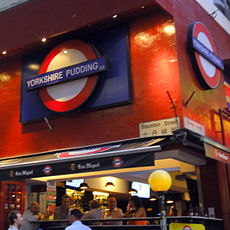 Bar in Hong Kong's SoHo district named after the dish.

Batter puddings figured prominently as weapons in the third episode of season five of The Goon Show, entitled "The Terror Of Bexhill-on-Sea" or "The Dreaded Batter Pudding Hurler".[7] The show was first broadcast in 1954. Spike Milligan's script featured a mysterious villain who was prowling the nights hurling freshly baked batter puddings at unsuspecting victims on the southern coast of England in 1941. It was also referenced in popular British science fiction show Doctor Who, in the episode "The Power of Three" the Eleventh Doctor states that he invented the Yorkshire pudding.[8][9]

In the CBS show Elementary — season 2, episode 10 — Sherlock Holmes reveals that making Yorkshire pudding is relaxing to him. He doesn't like eating it, however, and throws it out as soon as it's made.