From Infogalactic: the planetary knowledge core
Jump to: navigation, search
For the mathematician, see Yoshiro Mori (mathematician).
In this Japanese name, the family name is Mori.

Yoshirō Mori (森 喜朗, Mori Yoshirō?, born 14 July 1937) is a Japanese politician who served as the 85th and 86th Prime Minister of Japan between 5 April 2000 and 26 April 2001. Described as having "the heart of a flea and the brain of a shark,"[1][2] he was an unpopular prime minister mainly remembered today for his many gaffes and situationally inappropriate actions. He is currently President of the Japan Rugby Football Union as well as the Japan-Korea Parliamentarians' Union. In 2014, he was appointed to head the organizing committee for the 2020 Summer Olympics.[3]

Yoshiro Mori was born in present-day Nomi, Ishikawa, Japan, as the son of Shigeki and Kaoru Mori, wealthy rice farmers with a history in politics, as both his father and grandfather served as the mayor of Neagari, Ishikawa Prefecture. His mother died when Yoshiro was seven years old. He studied at the Waseda University in Tokyo, joining the rugby union club. He developed a passion for the sport but was never a high-level player; he once compared rugby to his relationship with other parties in the ruling coalition by stating: "In rugby, one person doesn't become a star, one person plays for all, and all play for one."[4]

After university, Mori joined the Sankei Shimbun, a conservative newspaper in Japan.

In 1962, he left the newspaper and became secretary of a Diet member, and in the 1969 general election, he was elected in the lower house at age 32. He was reelected 10 consecutive times. In 1980, he was involved in the Recruit scandal about receiving unlisted shares of Recruit (company) before they were publicly traded, and selling them after they were made public for a profit of approximately 1 million dollars. He was education minister in 1983 and 1984, international trade and industry minister in 1992 and 1993, and construction minister in 1995 and 1996.

In 1999, Mori began to assume control of the Mitsuzuka faction (formerly Abe faction) that had been headed by Hiroshi Mitsuzuka in the Liberal Democratic Party (LDP).[5]

In the midst of a battle with Liberal Party leader Ichiro Ozawa, Prime Minister Keizō Obuchi suffered a stroke and cerebral hemorrhage on 2 April 2000 and was unable to continue in office. The Cabinet held an emergency meeting and resigned en masse. Mori, who was the secretary general of the Liberal Democratic Party (LDP), was unanimously elected president, and became prime minister with the votes of the LDP, New Komeito and New Conservative Party (composed of members who left Ozawa's party on April 3). Mori announced that he would keep Obuchi's cabinet in place.[6] 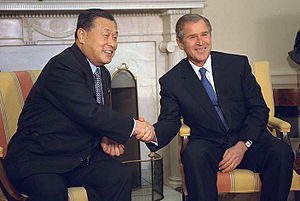 The media coverage of Mori's term as prime minister was dominated by his gaffes and undiplomatic comments. Even prior to his election as prime minister, he had been described in the Japanese media as having "the heart of a flea and the brain of a shark."[6][7]

In November 2000, with Mori's approval ratings below 30%, opposition politicians attempted to win a vote of no confidence against Mori by soliciting support from rebels within the LDP. Hiromu Nonaka, the secretary general of the party, quashed the potential revolt by threatening to expel any LDP politicians who voted for the measure.[17] The vote failed 237 to 190.[18] Nonaka resigned days later amid speculation that he would challenge Mori for leadership of the LDP.[19]

Towards the end of Mori's term, his approval rating dropped to single digits. In March 2001, reports surfaced that Mori had told LDP leaders of his plans to resign. Although he denied the reports, they contributed to a massive drop in Japanese stock market prices early that week.[13] On April 6, he officially announced his intention to resign.[20] Junichiro Koizumi won the subsequent LDP leadership election and became prime minister on 26 April 2001.

Mori appointed three cabinets. The third cabinet is officially referred to as a continuation of the second cabinet, as the changes came amid a major administrative realignment in January 2001 that eliminated several cabinet positions and renamed several key ministries.

After resigning as prime minister, Mori remained a member of the House of Representatives, representing the Ishikawa 2nd district, until announcing in July 2012 that he would not stand in the December 2012 general election.[21]

He was awarded the Padma Bhushan, India's third highest civilian award, in 2004.[22] 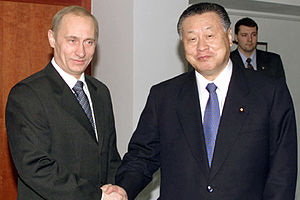 Mori remained an important player in Russo-Japanese relations following his resignation as prime minister due to his close personal relationship with Vladimir Putin. Prime Minister Yoshihiko Noda of the Democratic Party of Japan considered tapping Mori in 2012 to resolve the dispute between the two countries over the Kuril Islands, despite the fact that Noda and Mori were from opposing parties in the Diet.[23] In 2013, Mori met with Putin and Sergey Naryshkin in preparations for a summit between Putin and Japanese Prime Minister Shinzo Abe. Mori had at one time suggested that Japan could give Russia three of the four disputed islands in exchange for a peace treaty, which went against the Japanese government's official view that Moscow should acknowledge Japan's ownership of all four.[24] 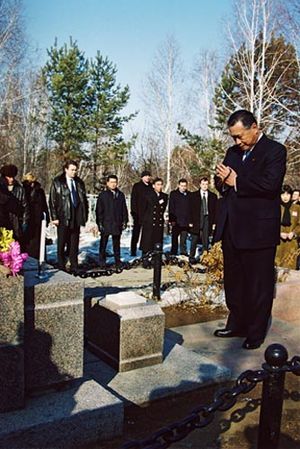 Mori at the grave of his father in Shelekhov

Mori has a personal connection to Russia, as his father Shigeki Mori developed a relationship with the Siberian town of Shelekhov during his time as mayor of the city of Neagari, and developed a bilateral dialogue to improve the gravesites of Soviet soldiers in Japan and Japanese soldiers in Siberia; he was so close to Russia that Japanese authorities monitored him closely as a potential communist sympathizer. The elder Mori visited Shelekhov more than 15 times during his 35 years in office, and was buried there following his death.[25]

Mori became President of the Japan Rugby Football Union in June 2005. It had been hoped his clout would help secure the 2011 Rugby Union World Cup for Japan, but instead the event was awarded to New Zealand in late November 2005.[26] This led former PM Yoshiro Mori to accuse the Commonwealth of Nations countries of "passing the ball around their friends."[27] Mori later assisted in Japan's successful bids for both the 2019 Rugby World Cup and 2020 Summer Olympics.[3]

In 2014, at the age of 76, he was appointed to head the organizing committee for the 2020 Summer Olympics in Tokyo. He quipped that "I am destined to live five or six more years if I am lucky. This will be my one last service to the country."[3] However, Mori drew international and domestic criticism for his critical statements about Japan's Olympic figure skaters Mao Asada and Chris Reed and Cathy Reed, who were representing Japan at the 2014 Sochi Olympics.[28]

He is married to Chieko (born: Chieko Maki), a fellow Waseda University student, and he has a son, Yūki Mori, and a daughter, Yoko Fujimoto.