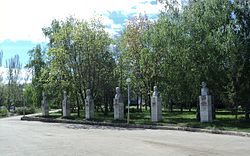 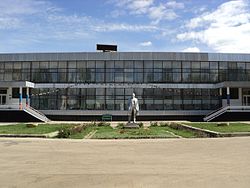 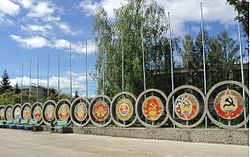 Young Pioneer camp (Russian: Пионерский лагерь) was the name for the vacation or summer camp of Young Pioneers. In the 20th century these camps existed in many socialist countries, particularly in the Soviet Union.

The first All-Union Young Pioneer camp, Artek was formed on June 16, 1925.[1] The Young Pioneer camp phenomenon grew in popularity and in 1973 in the USSR existed approximately forty thousand Young Pioneer camps. On that year approximately 9,300,000 children had vacations in these camps. There were different types of camps: sanitation camps, sports camps, tourist camps, thematic camps (for young technicians, young naturalists, young geologists and children of other potential careers). Generally speaking if parents wanted their child or children to go to one of these Young Pioneer camps, they had to pay a fee to apply for accommodation in the camp. However, typically the state organization where the parent worked "sponsored" the child by allotting the worker's child a place in the camp free of charge to the parent or parents as an incident to the parent's employment.

The main Young Pioneer camps of the Soviet Union were All-Union Young Pioneer camp Artek (near Gurzuf), republican camps: Orlyonok (near Tuapse, Russian SFSR, opened in 1960), Okean (near Vladivostok, Russian SFSR, opened in 1983) Molodaya Gvardiya (near Odessa, Ukrainian SSR) and Zubryonok (in Minsk Oblast, Byelorussian SSR). It was very difficult to apply for accommodation to the main camps, especially to Artek, as they were very popular.

In 1977 a group of Canadian teens and pre-teens from across Canada were sent to the Soviet Young Pioneer camp, Orlyonok. The book Lost in Moscow[2] by Kirsten Koza details their unusual escapades at this elite summer camp in the USSR.

In East Germany the Ernst Thälmann Pioneer Organisation built a pioneer camp (known as a "pioneer republic") in 1952 at Werbellinsee north-east of Berlin. It was based on the Artek. It was considered a privilege to be chosen to go to this camp.

3. To Russia with love. My visit to a young Pioneer Camp in Minsk during the summer of 1972. https://sites.google.com/site/iwenttoapioneercamp1970s/home