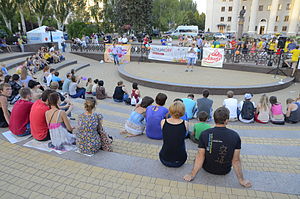 Youth Day is a holiday dedicated to the youths of a country.

International Youth Day is an international observance on August 12 officially recognized by the United Nations.

On 14 April Angola celebrates Youth Day in memory of Hoji-ya-Henda, who was killed on that day during the Portuguese Colonial War.[1] Archived 22 October 2006 at the Wayback Machine [2] [3]

National Youth Day is a national holiday in Cameroon on February 11.

Youth Day (青年节) in the People's Republic of China is on May 4. It was established in December 1949 by the Government Administration Council [4] to commemorate the beginning of the May Fourth Movement.

Youth Day (青年節) in the Republic of China (Taiwan) has been celebrated on March 29[1] since 1954. It commemorates the Huanghuagang Uprising of 1911, during which 72 young revolutionaries sacrificed their lives to overthrow the Qing Dynasty. The Uprising took place on April 27 (the 29th day of the 3rd month in Chinese Calendar), 1911 and is subsequently known as 3.29 Guangzhou Uprising. This event also marked the last unsuccessful attempt to overthrow the Qing before the Wuchang Uprising successfully overturned millennia of dynastic rule in China to establish the Republic of China.

Originally, Youth Day was celebrated on May 4 to commemorate the patriotic May Fourth Movement in 1919, in which many young intellectuals protested against imperialists. Since the establishment of Youth Day on March 29, May 4 has been known as Literary Day (文藝節) in Taiwan, as the May Fourth Movement is part of a broader New Culture Movement.

Youth Day in India is celebrated on 12 January on the birthday of Swami Vivekananda.

In 1984, the Government of India declared and decided to observe the Birthday of Swami Vivekananda (12 January, according to the English calendar) as National Youth Day every year from 1985 onwards. To quote from the Government of India's Communication, ‘It was felt that the philosophy of Swamiji and the ideals for which he lived and worked could be a great source of inspiration for the Indian Youth.’

Swami Vivekananda's Birthday, according to Indian Almanac (Vishuddha Siddhanta Almanac) is on Pausha Krishna Saptami tithi, which falls on different dates of English Calendar every year. This is observed in various centres of Ramakrishna Math and Mission in a traditional Hindu manner which includes mangalarati, special worship, homa (fire-ritual), meditation, devotional songs, religious discourses, sandhyarati (versper service in the evenings), and so on.

Swami Vivekananda's lectures and writings, deriving their inspiration from the Indian spiritual tradition and the broad outlook of his Master Sri Ramakrishna, are a source of inspiration and have motivated numerous youth organizations, study circles, and service projects involving youth. All his teachings can be found in The Complete Works of Swami Vivekananda, in nine volumes, published from Advaita Ashrama. (Their website)

Youth Day is celebrated in Iran on 11th Shaban (Hejri Ghamari) on the birthday of Hazrat e Alie Akbar (first son of Imam Hossein). After Iran revolution in 1979 the extremist Muslim government endeavored to replace all the national days with religious events such as the birth days and death anniversaries of family members of Prophet Mohammad.

Youth Day is celebrated on the first Monday of August in Kiribati.

Youth Day is a public holiday in Morocco on August 21, the birthday of the reigning monarch, Mohammed VI of Morocco.

Youth Day is celebrated on March 11 in Pakistan.

Youth Day is celebrated on first Sunday of July every year in Singapore.

Youth Day on 16 June is a public holiday in South Africa and commemorates a protest which resulted in a wave of protests across the country known as the Soweto uprising of 1976. It came in response to multiple issues with the Bantu Education Act and the government edict in 1974 that Afrikaans be used as medium of instruction for certain subjects in black schools. The iconic picture of Hector Pieterson, a black schoolchild shot by the police, brought home to many people within and outside of South Africa the brutality of the Apartheid government.

On 20 September each year in Thailand, National Youth Day (Thai: วันเยาวชนแห่งชาติ, Wan Yaowachon Haeng Chat) commemorates the birth dates of Kings Chulalongkorn and Ananda Mahidol. Thailand celebrates Youth Day on this date because of the many births in the month of September.

Youth and Sports Day (Gençlik ve Spor Bayramı) on May 19 in Turkey is dedicated to the youth. This day is also Atatürk Day (Atatürk'ü Anma), a day of commemoration of Kemal Atatürk, the "Father of Turkey", and the commemoration of the beginning of the national liberation movement initiated by Atatürk in 1919

The day is celebrated in honor of the arrival of Kemal Atatürk to Samsun on May 19, 1919, when the Turkish War of Independence began.

Youth Day is celebrated on March 21 in Tunisia.

Youth Day is celebrated on June 24 in Ukraine.[2]

Youth Day is celebrated on February 12.[5] The holiday was created to commemorate all the teenagers above 12 years old who fought and died in the Battle of La Victoria, during the Venezuelan War of Independence, on February 12, 1814.[6]

Youth Day was celebrated throughout the former Yugoslavia on May 25. This was also a celebration of Josip Broz Tito's birthday who was in fact born on May 7, 1892. His birthday was celebrated on May 25, because his troops were attacked by Nazis on May 25, day of his birth found on his forged personal documents. In the weeks preceding the date youth ran a relay around the country and on his birthday Tito was ceremonially presented with the baton. The baton, which had passed through all major cities, contained a symbolic birthday message, ostensibly from the youth of the whole country.