From Infogalactic: the planetary knowledge core
Jump to: navigation, search
This is a Korean name; the family name is Yun.

Yun Bong-gil (21 June 1908-19 December 1932) was a Korean independence activist who set off a bomb that killed several Japanese dignitaries in the Shanghai International Settlement in 1932. He was posthumously awarded the Republic of Korea Medal of Order of Merit for National Foundation in 1962 by the Korean government.

Yun Bong-gil was born in Yesan County in Japanese-controlled Korea in June 1908. He attended Deoksan Elementary School and also studied in Ochi Seosuk (a village school that taught Korean and Chinese). As Korea had been made a protectorate within the Japanese empire in 1905, Yun grew up in a troubled country. Local resistance grew considerably with the annexation of Korea in 1910. It culminated in the March 1st Movement in 1919 that was aggressively crushed by the Japanese authorities (hundreds of protesters were massacred by the Japanese police force and army).[1] The brutal repression that followed made many activists flee into China.

By 1926 Yun had become an independence activist, starting evening classes in his home town to help educate people from rural communities about the issues. At the age of 20, he had organized a reading club and published several pamphlets.[2] In 1930, after establishing two rural athletic associations for the nationalist movement, Yun decided to go to China because of the Japanese crackdown. On arrival in Shanghai he joined a nationalist group, the Korean Patriotic Corps (한인애국단; 韓人愛國團), that was organized and led by Kim Koo. 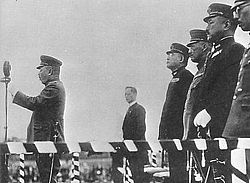 Japanese dignitaries listen as General Yoshinori Shirakawa addresses the crowd in Hongkou Park, Shanghai moments before the bombing on 29 April 1932.

On 29 April 1932, Yun took a bomb disguised as a water bottle to a celebration arranged by the Imperial Japanese Army (IJA) in honor of the Emperor's birthday at Hongkou Park, Shanghai (one contemporary news report states Yun threw a hand grenade but they also say he was killed at the scene[3]). The bomb killed General Yoshinori Shirakawa (白川 義則?), and the government minister for Japanese residents in Shanghai, Kawabata Sadaji (河端貞次?).[4] Among the seriously injured were Lieutenant General Kenkichi Ueda (植田 謙吉?), the commander of the 9th Division of the Imperial Japanese Army, and Mamoru Shigemitsu (重光 葵?), Japanese Envoy in Shanghai, who both lost a leg. The Japanese Consul-General in Shanghai, Kuramatsu Murai (村井倉松?), was seriously injured in the head and body.[5] Yun then tried to kill himself by detonating a second bomb disguised in a bento box. It did not explode and he was arrested at the scene. The Illustrated London News reported that:

"The Japanese National Anthem was being played, when a youth was seen to step forward and place a cylinder on the front of the dais and then dart backwards. A dull explosion immediately followed, but it attracted so little attention that the music continued playing. [...] others were seen to collapse wounded and bleeding, while soldiers seized the youth and battered him. Subsequently, another bomb of the same pattern was found near the dais unexploded."[6]

After being convicted by a Japanese military court in Shanghai on 25 May, he was transferred to Osaka prison on 18 November. He was then moved to Kanazawa, Ishikawa: the headquarters of the IJA's 9th Division. Yun was executed by firing squad on 19 December.[2] His body was buried in Nodayama cemetery in Kanazawa.

The then-President of the Chinese Republic, Chiang Kai-shek of the Nationalist government, praised Yun actions stating he was "a young Korean patriot who has accomplished something tens of thousands of Chinese soldiers could not do".[7] However the future South Korean president, Syngman Rhee, disapproved of the incident and Kim Koo's strategy of assassinations as a means to achieve independence because the Japanese could use such attacks to justify their oppression in Korea.[5]

In May 1946, Korean residents in Japan exhumed Yun's remains from Nodayama cemetery. After being transferred to Seoul, they were given Korean funeral rites and reburied in the Korean National Cemetery.

On 1 March 1962, the South Korean government posthumously bestowed on him the Republic of Korea Cordon (the highest honor) of the Order of Merit for National Foundation.

However, the activities of Kim Koo and the Korean Independence movement remain very sensitive topics. In 2007 a visiting foreign professor provoked controversy and a student walkout when he referred to the likes of Joo and Yun Bong-gil as "terrorists" in a lecture on Korean history. Modern Korean history professor, Jeong Byeong-jun, from Ehwa University dismissed this description as a "view of Westerners".[8]