From Infogalactic: the planetary knowledge core
Jump to: navigation, search
Not to be confused with Yuri's Night. 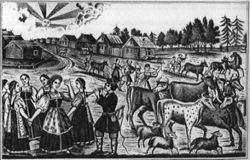 Yuri's Day in the Spring. Lubok. 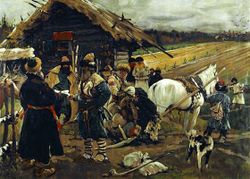 Yuri's Day in the Autumn. A Peasant Leaving His Landlord on Yuri's Day, painting by Sergey Ivanov

Yuri's Day (Russian: Юрьев день, Егорий Вешний, Yuriev Den, Egoriy Veshniy) is the Russian name for either of the two feasts of Saint George celebrated by the Russian Orthodox Church.

Along with various other Christian churches, the Russian Orthodox Church celebrates the feast of Saint George on April 23 (Julian calendar), which falls on May 6 of the Western (Gregorian calendar. In addition to this, the Russian Church also celebrates the anniversary of the consecration of the Church of St George in Kiev by Yaroslav the Wise (1051) on November 26 (Julian calendar), which currently falls on December 9. One of the Russian forms of the name George being Yuri, the two feasts are popularly known as Vesenniy Yuriev Den (Yuri's Day in the Spring) and Osenniy Yuriev Den (Yuri's Day in the Autumn).

Yuri's Day in the Autumn, celebrated at the time when the agricultural year is over and the harvest is in, had a special significance on the calendar of Russian peasants during the centuries when the system of Russian serfdom was established. The Sudebnik of 1497 established the two weeks' period around the Autumn Yuri's Day (one week before the feast and one week after it), as the only time of the year when the Russian peasants were free to move from one landowner to another. A century later, Boris Godunov's administration interdicted the movement of peasants on Yuri's day, thus finalizing the evolution of Russian serfdom.

A popular Russian expression harking back to that unfortunate event still survives (roughly translated, it is "there you have it, Granny, Yuri's Day", referring to a broken promise or, more generally, to any failed expectation).