From Infogalactic: the planetary knowledge core
Jump to: navigation, search
This article is about the Grand Prince of Kiev. For the Russian submarine, see Russian submarine Yury Dolgorukiy. For the princely family of Dolgorukov, see Dolgorukov (disambiguation).
"Yuri I" redirects here. For the king of Galicia-Volhynia, see Yuri I of Galicia. For the human-powered helicopter, see NASG Yuri I.

Yuri I Vladimirovich (Russian: Юрий Владимирович), known under his soubriquet Yuri Dolgorukiy (Russian: Юрий Долгорукий, literally "Yuri the Long-Armed"; also known in various accounts as Gyurgi, Dyurgi, or George I of Rus), (c. 1099 – 15 May 1157) was a Rurikid prince and founder of the city of Moscow. He reigned as Velikiy Kniaz (Grand Prince) of Kiev from September 1149 to April 1151 and then again from March 1155 to May 1157. Yuri played a key role in the transition of political power from Kiev to Suzdal following the death of his elder brother Mstislav the Great in 1132.

According to Vasily Tatishchev, Yuri was born in 1090 which would make him a son of Vladimir Monomakh's first wife Gytha of Wessex, a daughter of Harold Godwinson. However, according to the "Testament of Vladimir Monomakh" Gyurgi's mother died on May 7, 1107, while Gytha died on March 10 and probably in 1098. Thus, Yuri Vladimirovich could have been a son of his father's second wife Yefimia and been born between 1095/97 and 1102.

Although his birth date is uncertain, some chronicles report that Yuri's elder brother, Viacheslav, said to him: "I am much older than you; I was already bearded when you were born." Since Viacheslav was born in 1083, this pushes Yuri's birth to c. 1099/1100.

There is also a version that has his son Andrei Bogolyubskiy being born around 1111. It is doubtful that Yuri was at that time younger than 16 or 17.

The question of Yuri's birthday remains open. The date can be approximated to sometime in the 1090s.

Activities in Rostov and Suzdal 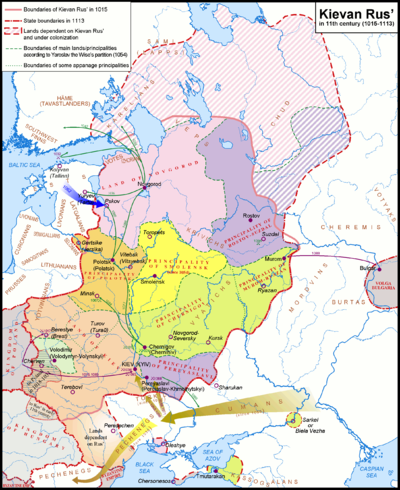 In 1108, Yuri was sent by his father to govern in his name the vast Rostov-Suzdal province in the north-east of Kievan Rus'. In 1121, he quarreled with the boyars of Rostov and moved the capital of his lands from that city to Suzdal. As the area was sparsely populated, Yuri founded many fortresses there. He established the towns of Ksniatin in 1134, Pereslavl-Zalesski and Yuriev-Polski in 1152, and Dmitrov in 1154. The establishment of Tver, Kostroma, and Vologda is also popularly assigned to Yuri.

In 1147, Yuri Dolgoruki had a meeting with Sviatoslav Olgovich in a place called Moscow. In 1156, Yuri fortified Moscow with wooden walls and a moat. Although the settlement probably existed earlier, Dolgoruki is often called "The Founder of Moscow".

For all the interest he took in fortifying his Northern lands, Yuri still coveted the throne of Kiev. It is his active participation in the Southern affairs that earned him the epithet of Dolgorukiy, "the long-armed". His elder brother Mstislav of Kiev died in 1132, and "the Rus lands fell apart", as one chronicle put it. Yuri instantaneously declared war on the princes of Chernigov, the reigning Grand Prince and his brother Yaropolk II of Kiev, enthroned his son in Novgorod, and captured his father's hereditary principality at Pereyaslav of the South. The Novgorodians, however, betrayed him, and Yuri avenged by seizing their key eastern fortress, Torzhok.

In 1147, Dolgorukiy resumed his struggle for Kiev and two years later he captured it, but in 1151 he was driven from the capital of Rus by his nephew Iziaslav. In 1155, Yuri regained Kiev once again. His sudden death, however, sparked anti-Suzdalian uprising in Kiev. Yuri Dolgoruki was interred at the Saviour Church in Berestovo, Kiev, but his tomb is empty.

The Primary Chronicle records the first marriage of Yuri on 12 January 1108. His first wife was a daughter of Aepa Ocenevich, Khan of the Cumans. Her paternal grandfather was Osen. Her people belonged to the Cumans, a confederation of pastoralists and warriors of Turkic origin.

His second wife Helena survived him and moved to Constantinople. Her paternity is not known for certain but Nikolay Karamzin was the first to theorise that Helena was returning to her native city. She has since been theorised to be a member of the Komnenos dynasty which ruled the Byzantine Empire throughout the life of Yuri. She has been tentatively identified with Helena Komnene, a daughter of Isaac Komnenos. The identification would make her a granddaughter of Alexios I Komnenos and Irene Doukaina.

Yuri had at least fifteen children. The identities of the mothers are not known for certain

Muscovites have cherished Yuri's memory as the legendary founder of their city. His patron saint, Saint George appears on the coat of arms of Moscow slaying a dragon. In 1954, a monument to him designed by sculptor Sergei Orlov was erected on Moscow's Tverskaya Street, the city's principal avenue, in front of the Moscow municipality.

Dolgoruki's image was stamped on a medal "In commemoration of Moscow's 800th anniversary", introduced in 1947.

The nuclear submarine Yuri Dolgoruki is named after him.