From Infogalactic: the planetary knowledge core
(Redirected from Yuste)
Jump to: navigation, search 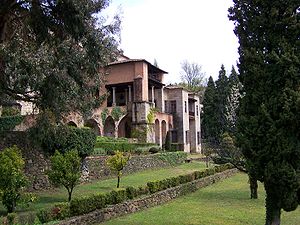 Monastery of Yuste
For other uses, see Yuste (disambiguation).

The Monastery of Yuste is a monastery in the small village now called Cuacos de Yuste (in older works San Yuste or San Just) in the province of Cáceres in the autonomous community of Extremadura, Spain. The monastery was founded by the Hieronymite Order of monks in 1402.

In 1556 Charles V, Holy Roman Emperor retired to the Monastery of Yuste, near Cuacos de Yuste, after having abdicated the Spanish crown in favour of his son Philip II of Spain and the crown of the Holy Roman Empire in favour of his brother Ferdinand I. He intended to devote the rest of his life to prayer in this rather out of the way and obscure monastery. Nonetheless, the monastery had to be expanded that year to make room for the emperor and the 50 or 60 members of his entourage.

From time to time well-known people, including his illegitimate son Don Juan de Austria and his heir Philip II of Spain, came to visit the retired emperor. A fictitious visit by Carlos, Prince of Asturias, and other characters provides the moonlit setting for Act V of the original version of Giuseppe Verdi's opera Don Carlos, and Yuste is also the setting for both scenes of Act II of that long and celebrated opera. Charles died there on September 21, 1558. He was buried in the monastery church, though his remains were later transferred to the Royal Monastery of San Lorenzo del Escorial.

During the Peninsular War, the monastery was burnt to the ground. It was left in ruins until 1949, when the Spanish government restored it at the behest of Francisco Franco.

The area around Yuste, the Valle del Jerte, is now an eco-tourist destination. Tourists can visit the monastery, including the emperor's apartments. The valley is also known for its cherry trees and the beauty of the surrounding landscape.

At the present, the monastery is currently inhabited by monks of the Pauline Order.