From Infogalactic: the planetary knowledge core
Jump to: navigation, search
For the Japanese given name, see Yūya.

Yuya (sometimes Iouiya, also known as Yaa, Ya, Yiya, Yayi, Yu, Yuyu, Yaya, Yiay, Yia, and Yuy)[1] was a powerful Egyptian courtier during the Eighteenth dynasty of Egypt (circa 1390 BC). He was married to Tjuyu, an Egyptian noblewoman associated with the royal family, who held high offices in the governmental and religious hierarchies. Their daughter, Tiye, became the Great Royal Wife of Amenhotep III.[2]

They also may have been the parents of Ay,[3] an Egyptian courtier active during the reign of pharaoh Akhenaten, who eventually became pharaoh, as Kheperkheprure Ay. There is no conclusive evidence, however, regarding the kinship of Yuya and Ay, although certainly, both men came from the town of Akhmim.[4] Yuya and Tjuyu also are known to have had a son named Anen, who carried the titles Chancellor of Lower Egypt, Second Prophet of Amun, sm-priest of Heliopolis, and Divine Father.[5]

The tomb of Yuya and Tjuyu was, until the discovery of Tutankhamun's, one of the most spectacular ever found in the Valley of the Kings despite Yuya not even being a pharaoh. Although the burial site was robbed in antiquity, many objects not considered worth plundering by the robbers remained. Both the mummies were largely intact and were in an amazing state of preservation. Their faces in particular were relatively undistorted by the process of mummification, and provide an extraordinary insight into the actual appearance of the deceased while alive (see photographs). 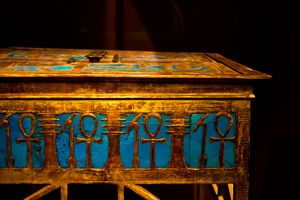 Yuya came from the Upper Egyptian town of Akhmim, where he probably owned an estate and was a wealthy member of the town's local nobility. His origins remain unclear. The study of his mummy showed that Yuya had been a man of taller than average stature and the anatomist Grafton Elliot Smith considered that his appearance was not typically Egyptian.

Taking into account his unusual name and features, some Egyptologists believe that Yuya was of foreign origin, although this is far from certain.[6] The name Yuya may be spelled in a number of different ways as Gaston Maspero noted in Theodore Davis's 1907 book—The Tomb of Iouiya and Touiyou.[7] These include "iAy", ywiA", yw [reed-leaf with walking feet]A, ywiw" and, in orthography—normally a sign of something foreign—"y[man with hand to mouth]iA".[8]

It was not typical for an Egyptian person to have so many different ways to write his name; this may suggest that Yuya's ancestors had a foreign origin. In "The Hebrew Pharaohs of Egypt" (ISBN 1-59143-022-4) one solution is that Yuya had some Mitannian ancestry; this argument is based on the fact that the knowledge of horses and chariotry was introduced into Egypt from Asia and Yuya was the king’s "Master of the Horse." It was also suggested that Yuya was the brother of queen Mutemwiya, who was the mother of Pharaoh Amenhotep III and may have had Mitannian royal origins.[9] However, this hypothesis can not be substantiated, since nothing is known of Mutemwiya's background. While Yuya lived in Upper Egypt, an area that was predominantly native Egyptian, he could have been an assimilated descendant of Asiatic immigrants or slaves who rose to become a member of the local nobility at Akhmin. If he was not a foreigner, however, then Yuya would have been the native Egyptian whose daughter was married to Amenhotep III. Yuya is believed to have died around 1374BC in his mid 50s.

Yuya served as a key adviser for Amenhotep III,[3] and held posts such as "King’s Lieutenant" and "Master of the Horse"; his title "Father-of-the-god" possibly referred specifically to his being Amenhotep's father-in-law. In his native town of Akhmin, Yuya was a prophet of Min, the chief god of the area, and served as this deity's "Superintendent of Cattle".[10]

File:Tuyayuya.jpg
Mummies of Yuya (left) and Tjuyu (right), who were found in the same tomb

Yuya and his wife were buried in the Valley of the Kings at Thebes, where their private KV46 tomb was discovered in 1905 [11] by James Quibell, who was working on behalf of Theodore M. Davis. Although the tomb had been penetrated by tomb-robbers, perhaps they were disturbed as Quibell found most of the funerary goods and the two mummies virtually intact.[10] As the Egyptologist Cyril Aldred noted:

"Though the tomb had been rifled in antiquity, the [tomb's] opulent funerary furniture was largely intact, and there was no doubt as to the identity of the pair, who were found resting among their torn linen wrappings, within their nests of coffins."[12]

The goods buried with Yuya and Tjuyu constituted probably the finest ensemble of high-class New Kingdom furniture, etc., recovered before the discovery of the tomb of Tutankhamun seventeen years later.

Journalist Ahmed Osman has suggested an identification between Joseph, the ancient Hebrew patriarch who led the tribe of Israel into Egypt during a famine, and Yuya. Through analysis of anomalous features of the mummy of Yuya as well as linguistic and chronological data, Osman points out how Yuya is the only Egyptian mummy to have his hands placed under his chin rather than across his chest, he has what appears to be Semitic features, and a beard style similar to that of the ancient Hebrews, whereas Egyptian officials were known to shave their facial hair. Additionally, Joseph in the Genesis 45:8 is called "a father of pharaoh" and Osman claims that Yuya is the only Egyptian official to ever have had this title (with the exception of his son, Ay, who held the similar title Itnetjer, or "father of the god").[13]

This theory has not been accepted in mainstream Egyptology and as well contradicts the account regarding Joseph's burial location in Joshua (24:32). Donald B. Redford wrote a scathing review of Stranger in the Valley of the Kings for Biblical Archaeology Review.[14] Similarly, Deborah Sweeney has expressed great doubt toward the proposed identification. Sweeney states that the title "God's father of the Lord of the Two Lands" is an extension of the title "God's Father," which is not exclusive to Yuya. The Bible states very clearly that Joseph's mummified body was exhumed and transported to Canaan by the Israelites, while Yuya's remained undisturbed in the Valley of the Kings in Egypt, where his mummy was discovered in 1906.[15] However, the biblical statement is proposed by Osman to be a later insertion based upon its placement with regard to the Documentary Hypothesis.