Yverdon-les-Bains (French pronunciation: ​[ivɛʁdɔ̃lebɛ̃]) (called Eburodunum and Ebredunum during the Roman era) is a municipality in the district of Jura-Nord vaudois of the canton of Vaud in Switzerland. It is the seat of the district. The population of Yverdon-les-Bains, as of December 2014[update], was 29,406.[2]

Yverdon is located in the heart of a natural setting formed by the Jura mountains, the plains of the Orbe, the hills of the Broye and Lake Neuchâtel. It is the second most important town in the Canton of Vaud. It is famous for its thermal springs and is an important regional centre for commerce and tourism.

It was awarded the Wakker Prize in 2009 for the way the city handled and developed the public areas and connected the old city with Lake Neuchâtel.[3]

The heights nearby Yverdon seem to have been settled at least since the Neolithic Age about 5000 BCE, as present archeological evidence shows. The town was at that time only a small market place, at the crossroads of terrestrial and fluvial communication ways. People began to settle, at first in temporary huts at the water-front, for fishers and merchants, then in permanent dwellings. 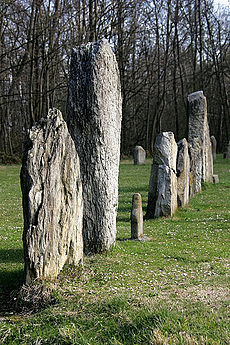 The Celtic Helvetii are said to have been the first permanent settlers of Eburodunum (Celtic and Roman name of Yverdon), from about the 2nd century BCE.

About a century later, the Romans realized the commercial and strategic importance of this place: it controlled major routes such as Geneva-Avenches, connecting the Rhône and Rhine basins, as well as those of Rhone and Danube.

The imposing Castrum, or stronghold, called Castrum Ebredunense was the second largest in Switzerland and demonstrated the importance the Romans attached to Yverdon. The port served as naval base for the barges supplying the defensive positions along the Rhine, which marked the North-Eastern border of the Empire. Thus the Roman "Vicus" of Eburodunum developed into a prosperous urban centre. The sulphur springs were already used for a thermal spa, as attested by excavations.[4] It is even possible that the Helvetii appreciated the beneficial effects of these waters.[5] 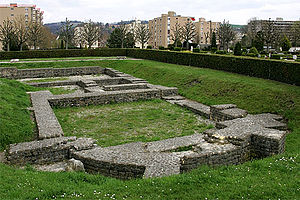 About a century after the first invasions of the Alemanni, when the "Vicus" had been completely destroyed, the Romans built a large military stronghold (about 325 CE). It covered about 5 acres (20,000 m2) and was protected by gigantic ramparts and 15 masonry towers (Castrum). The Barbarians invaded Italy in the 5th century, and threatened to assault Rome. In a last desperate effort to save the city, all troops stationed North of the Alps were ordered back to Italy. The garrison and the Roman administration had to abandon the Yverdon camp. The inhabitants of Eburodunum, up to then assigned to live beyond the ramparts, immediately took possession of the Castrum, using it for their own safety. Like this, Eburodunum-Yverdon survived the hard times, until the 15th century.[6] The Castrum was noted in the Notitia Dignitatum (dated c. 420 CE).

With the lake receding, the ancient town confined to the Castrum had lost its strategic position: no more direct access to the port, or to the new trade routes alongshore.

When Peter II of Savoy gradually extended his rule over the Pays de Vaud (Land of Vaud), he managed to impose road tolls as well as port and fishing taxes. He founded the new town ("Ville Neuve") of Yverdon, defended by walls and a castle. Construction works were launched around 1259 and attracted many settlers.[7] 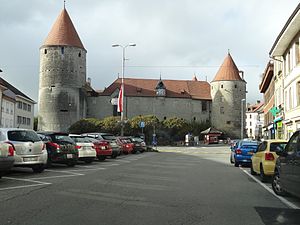 The imposing main walls and their four towers were erected within a few years. The design of the castle followed the geometric characteristics used for castles set in plains, and had been planned by the young mason and architect Jacques de Saint-Georges. Jacques also planned Caernarvon Castle and built the castle Saint-Georges d'Espéranches, near Lyon.

Yverdon's castle used to be the residence of the castellans of the Savoy dynasty, until 1536, followed by the bailiffs of Bern state. In 1798, the Département du Léman became the castle's owner. The Département had been set up by the short-lived "Helvetian Republic" (1798–1803), imposed by Napoleon I.

A few years later, Yverdon acquired the castle, to entrust it to Johann Heinrich Pestalozzi and his institute. After 1838, the castle housed a public school. New classrooms were created, especially on the second floor: dividing walls were erected, additional windows changed the severe look of the castle's façade. After 1950, these classrooms were gradually abandoned; the last classes left in 1974. The original medieval structure was then restored. The castle is today a multi-purpose cultural centre, housing a regional museum, a theatre, various conference rooms and the oldest public library of French-speaking Switzerland, founded already in 1763. The library is now part of the castle museum, existing since 1830.[8]

The Savoy rulers granted bountiful franchise and liberties to the burghers of Yverdon. The township prospered during the two hundred years preceding the Burgundy wars.

The 18th century proved to be one of Yverdon's most favorable periods, marked by cultural and economic highlights. Then a town of about 2.000 inhabitants, Yverdon radiated as a spa, and as a centre of thought (58 tomes of Yverdon Encyclopedia, published between 1770 and 1780), being in close contact with the great minds and movements of the time.[9]

Burnand, its architect, erected the town hall between 1768 and 1773, on the site of the former covered market. Inside the building, beautiful furniture and decorations are displayed, faience stoves, panels, wainscots and paintings. The vaults of the ancient granary are used year-round for art exhibitions.[10] 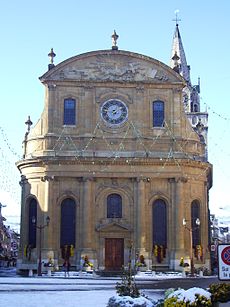 The temple of Yverdon-les-Bains

The Geneva architect Billon erected this Protestant church in 1757, on the site of Notre-Dame chapel of the 14th century. Its spire had been rebuilt in 1608, on the base of the original one, for which huge, sculpted blocks from the ruins of the Roman "Castrum" had been used.

14 stalls, figuring apostles and prophets, originate from the ancient chapel and are ascribed to Claude de Peney, who had worked at Fribourg and Hauterive. Peney died in 1499, and Bon Bottolier, cabinetmaker in Lausanne, was charged with crafting the stalls (1501–1502). Potier, of French origin, built the organ in 1766.[11]

The springs were known and used at least since the Roman era, but most probably before, at the time of the Helvetii. It is supposed that the spring was a sacred place, with some sort of wooden structure. Middle Age documents prove the existence of a spa centre, as early as 1429, and mention several useful buildings.

By 1728, the authorities decided to have a new spa constructed. Its reputation grew rapidly. The 18th century saw major developments and brilliant success, for the town and the spa. Then followed a period of decline: the spa lost its drive and popularity, and degraded to a simple political meeting point, by 1800 already. Completely neglected, the buildings dilapidated.

Encouraged by the Spanish scientist A. Gimbernat, the local Council decided to reconstruct the spa centre and to renovate its hotel in 1897. The consequences of the First World War (1914–1918) were detrimental, the number of guests having significantly declined. Its reputation remained however intact, until the 1930s.

Another period of decay followed, and by 1960 the centre and its equipment were again so dilapidated that they had to be closed. The idea of balneology had also completely changed. The Municipality repurchased the spa, including the neighbouring Château d'Entremonts. Restoration failed twice, but the project of 1974 could finally be realized two years later. The spa reopened in 1977. Prospects for further thermal springs were successful in 1982, and a new outdoor pool could be added a year later. Today, the spa welcomes more than 1200 visitors per day.[12]

During an independent test by the RTS in February 2008, it was found that the water in the shower area of the thermal center had high levels of legionella pneumophila.[13] During another test in 2011, the same programme found no significant levels of dangerous bacteria in the waters.[14] However, in October 2014, there was a leak of 4000l of hydrochloric acid from one of the tanks in the thermal center. No one was hurt, and the bathers remaining in the pools were asked to evacuate.[15]

The 18th century manor house, near the road to Yvonand, has served as summer residence of Frédéric Haldimand, burgher of Yverdon and first Governor of Canada (1777–1786), when this territory became part of the British crown.

This country-seat belongs now to Pro Natura, the Swiss League for the Protection of Nature, organizing special exhibitions, audio-visual shows as well as guided tours of the nature reserve, the Grande Caricaie.[16] 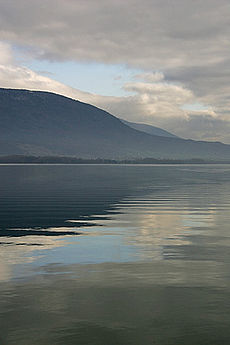 Fog on Lake Neuchâtel outside Yverdon

Of the built up area, industrial buildings made up 6.6% of the total area while housing and buildings made up 26.2% and transportation infrastructure made up 15.2%. Power and water infrastructure as well as other special developed areas made up 2.5% of the area while parks, green belts and sports fields made up 7.4%. Out of the forested land, 4.7% of the total land area is heavily forested and 1.6% is covered with orchards or small clusters of trees. Of the agricultural land, 27.1% is used for growing crops and 3.5% is pastures. All the water in the municipality is flowing water.[17]

The municipality was the capital of the Yverdon District until it was dissolved on 31 August 2006, and Yverdon-les-Bains became part of the new district of Jura-Nord Vaudois.[18]

The blazon of the municipal coat of arms is Vert, two Bars wavy Argent, in chief Argent, a letter Y Or.[20] 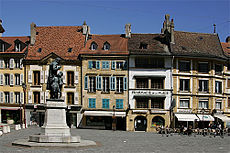 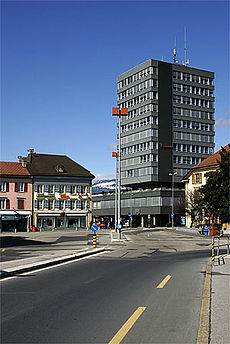 The historical population is given in the following chart:[27]

In 2000[update], there were 6,437 workers who commuted into the municipality and 4,894 workers who commuted away. The municipality is a net importer of workers, with about 1.3 workers entering the municipality for every one leaving. About 7.0% of the workforce coming into Yverdon-les-Bains are coming from outside Switzerland, while 0.0% of the locals commute out of Switzerland for work.[30] Of the working population, 16.7% used public transportation to get to work, and 53.9% used a private car.[22] 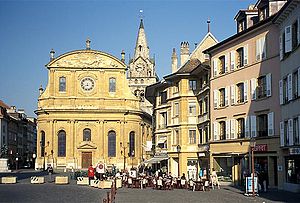 In the 2009/2010 school year there were a total of 3,093 students in the Yverdon-les-Bains school district. In the Vaud cantonal school system, two years of non-obligatory pre-school are provided by the political districts.[32] During the school year, the political district provided pre-school care for a total of 578 children of which 359 children (62.1%) received subsidized pre-school care. The canton's primary school program requires students to attend for four years. There were 1,589 students in the municipal primary school program. The obligatory lower secondary school program lasts for six years and there were 1,410 students in those schools. There were also 94 students who were home schooled or attended another non-traditional school.[33]

As of 2000[update], there were 2,043 students in Yverdon-les-Bains who came from another municipality, while 507 residents attended schools outside the municipality.[30]

Yverdon-les-Bains is home to 2 libraries. These libraries include; the Bibliothèque publique Yverdon and the Haute école d'ingénierie et de gestion du Canton de Vaud. There was a combined total (as of 2008[update]) of 99,302 books or other media in the libraries, and in the same year a total of 124,282 items were loaned out.[35]

There are nine sites that are listed as Swiss heritage site of national significance in Yverdon. The public buildings are; the Public Library of Yverdon-Les-Bains, Yverdon Castle and museum, the City Hall, the L'ancien hôtel de l'Aigle, the Thorens House (formerly Steiner House) and the Villa d'Entremont. It includes one religious building, the Temple. The last two sites are Clendy, a littoral settlement and prehistoric megalithic site and Eburodunum, a Celtic oppidum, a Roman vicus and a medieval and modern village.[36] 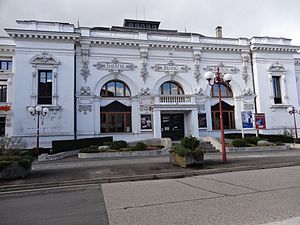 The prehistoric settlement at Baie de Clendy is part of the Prehistoric Pile dwellings around the Alps a UNESCO World Heritage Site.[37]