Zachariah Chandler (December 10, 1813 – November 1, 1879) was an American politician, one of the founders of the Republican Party, whose radical wing he dominated as a lifelong abolitionist. He was Mayor of Detroit, a four-term Senator from the state of Michigan, and Secretary of the Interior under President Ulysses S. Grant.

As a successful young businessman in Detroit, Chandler supported the Underground Railroad. During the Civil War, he advocated for the Union war effort, the abolition of slavery, and civil rights for freed African Americans. As Secretary of the Interior, Chandler eradicated serious corruption in the Bureau of Indian Affairs, fully endorsing President Grant's Peace Policy initiative to civilize American Indian tribes. In 1879, he was re-elected U.S. Senator and was a potential Presidential candidate, but he died suddenly after giving a speech in Chicago.

Zachariah Chandler was born in Bedford, New Hampshire on December 10, 1813.[1] His father was Samuel Chandler and his mother was Margaret Orr.[1] Samuel Chandler was a descendant of William Chandler who had migrated to Roxbury, Massachusetts from England in 1637.[1] Margaret Orr was the oldest daughter of military officer Col. John Orr.[1] Chandler was educated in the common schools.[1] Upon graduation, deciding not to attend college, Chandler moved west in 1833 to Detroit, at that time the capital of Michigan Territory.[1] In Detroit, Chandler opened a general store and through trade, banking, and land speculation became one of the weathiest men in the state of Michigan.[1]

On December 10, 1844 Chandler married Letitia Grace Douglass from the state of New York.[1]

From his youth, Chandler had been strongly opposed to slavery, and hoped that the Northern Whig party would be able to stop Southern slave power from spreading slavery into the Western Territories. [2] Chandler financially supported the Detroit Underground Railroad, which helped fugitive or runaway slaves find safe haven.[2]

In 1848 Chandler began his political career by making campaign speeches for Whig party presidential candidate Zachary Taylor.[1] In 1851, Chandler was elected Mayor of Detroit and served one year in office.[1] In 1852, Chandler ran as a Whig candidate for the Governor of Michigan, but he was defeated.[1] Having supported Kansas as a free state without slavery, Chandler signed a petition that formed the Republican Party on July 6, 1854.[1] In 1856, Chandler was a delegate at the first Republican Party National convention in Pittsburgh, Pennsylvania, and was a member of the Republican National Committee.[1] 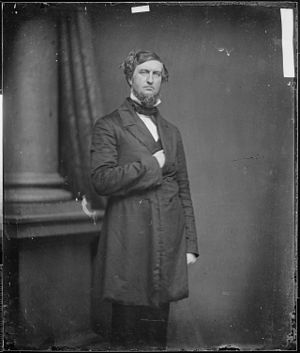 In January 1857, Chandler ran as a Republican and was elected as a U.S Senator for Michigan, succeeding Lewis Cass. Chandler was reelected in 1863 and again in 1869, serving from March 4, 1857, to March 4, 1875 in the 35th through the 43rd U.S. Congresses. [1] In the Senate Chandler allied himself with the anti-slavery Radicals, although he opposed Massachussets Senator Charles Sumner.[1] Chandler was the most outspoken Senator against succession.[1] From March 1861 to 1875 Chandler was chairman of the Committee on Commerce that controlled powerful "pork barrel" appropriations for rivers and harbors.[1] At the outbreak of the Civil War Chandler used his Senatorial influence to raise and equip the Michigan volunteers.[1] Chandler was a member of the Joint Committee on the Conduct of the War[1]

On July 6, 1862 Chandler castigated General George McClellan's prosecution of the war in a speech at Jackson, Michigan. [1] Chandler regarded his speech against McClellan as one of his most important public services.[1] On March 3, 1863 Chandler authored legislation for the collection and administration of abandoned property in the South.[1] On July 2, 1864 Chandler authored legislation for the regulation of intercourse with the insurrectionist Confederate states. [1]

Chandler supported the creation of a national bank, and voted for greenbacks as an emergency war measure, but strongly condemned any inflation of the currency. [1] Chandler supported Reconstruction Acts that gave civil rights to African Americans, but criticized them for being to lax. [1] On January 5, 1866 Chandler authored a resolution for non-intercourse with Great Britain for refusing to negotiate the Alabama Claims, but this was rejected by the Senate. [1] During the Civil War Great Britain secretly allowed Confederate warships to be armed in British ports. These ships did much to destroy Union commerce causing great monetary damage to the Union war effort. On November 29, 1867 Chandler submitted a resolution that Abyssinia be recognized as a beligerent nation at war against Great Britain, demanding that Abyssnia be given the "same rights which the British had recognized to the Confederacy" during the Civil War. [1] During the election of 1868 Chandler was chairman of the Republican Congressional Committee [1]

During his entire Senate career Chandler used his Senatorial federal patronage to increase his own political power. [1] Chandler's methods of obtaining power were considered "openly partisan and despotic if not actually corrupt" in obtaining control of the Republican machine in Michigan. [1] Chandler was for many years Michigan's undisputed Republican boss. [1] The Democratic landside during the election of 1874 broke his Senatorial power and he was defeated by Isaac P. Christiancy while seeking election for a fourth term, when the Michigan legislature deadlocked.[1]

Chandler was appointed Secretary of the Interior by President Ulysses Grant in October 1875 and served until 1877.[1] In compliance with President Grant's recommendations and authority, he implemented reforms in and reorganized the Department of Interior during his tenure in office. Previous Secretary of Interior Columbus Delano, was not a reformer, and had carelessly allowed profiteering to spread throughout the Interior Department. Secretary Chandler fired corrupt agents at the Bureau of Indian Affairs, and fired and replaced the Indian Commissioner and Bureau Clerk.[1] In addition, Secretary Chandler banned "Indian Attorneys" from the Interior Department, who swindled Indian tribes into paying for bogus representation in Washington D.C. Secretary Chandler fully endorsed President Grant's Peace Policy initiative to civilize American Indian tribes. In February 1876 Chandler handed Indians who refused to leave their hunting grounds, concerning the encroachment in the Black Hills by miners, over to Secretary of War William W. Belknap's department.

Chandler, as Chairman of the Republican National Committee, managed Rutherford B. Hayes' successful 1876 campaign for the presidency, though Hayes declined to keep Chandler as Secretary of the Interior. He became Chairman of the Michigan Republican Party in 1878.

In 1879, he was again elected to the Senate to fill the vacancy caused by the resignation of Isaac P. Christiancy, who had succeeded him just four years earlier. He served in the 45th and 46th Congresses from February 22, 1879, until his death later that year.[1]

Chandler died at the Grand Pacific Hotel in Chicago

Under consideration by party leaders as a possible candidate in the 1880 presidential election, Chandler went to Chicago to deliver a political speech on October 31, 1879. Keeping to his Radical roots Chandler spoke in front of an African American Young Men's Republican Auxillary Club at McCormick Hall.[3] Chandler said that he hoped one day blacks would be able to vote freely and safely, run for office, and make speeches throughout the nation including the South just as former rebels were allowed to vote, run for office, and speak in the North.[3] Although he had earlier contracted a cold he was known to be his robust self that day.[4] The next day he was found dead in one of his rooms at the Grand Pacific Hotel at 7:00 AM in the morning reclining on his bed.[3] He is interred at Elmwood Cemetery in Detroit.[5] 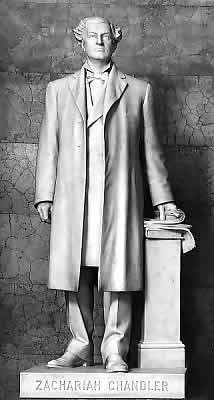 Zachariah Chandler at the National Statuary Hall. His statue has returned to Michigan since the state Legislature voted in 2007 to replace it with a statue of Gerald Ford.[6] His statue now rests in the atrium of Constitution Hall in Lansing, Michigan.[7]

When Chandler became Secretary of Interior appointed by President Grant in 1875 reformers were concerned that the department would continue under corruption and patronage as under Secretary Columbus Delano, Grant's previous appointment.[8] Chandler had a reputation as a wealthy Republican partican political boss, rather then a reformer. [8] However, reformers concerns were unwarranted as Chandler proved to be an efficient reformer firing many in the Department who were involved in corruption and fraud and for removing from the department persons known as "Indian Attornies". Chandler investigated corruption in his department and reported to President Grant, who gave him approval to launch reforms.