The cemetery began as the Taylor family cemetery and holds the graves of the president's parents, Richard Taylor, a colonel in the American Revolutionary War, and Sarah Strother Taylor; W.G.L. Taylor, a captain for the Confederate States of America and other family members. President Taylor's son, Richard Taylor, a general for the Confederate States of America, is buried at Metairie Cemetery in New Orleans.

The land which became Zachary Taylor National Cemetery was part of Richard Taylor's 400-acre (160 ha) estate, known as Springfield, given to him in gratitude for his service in the American Revolutionary War. The house in which the family lived for most of their time in Louisville is still nearby, and is called the Zachary Taylor House.

On November 1, 1850, Zachary Taylor was buried in his family's burial ground. His remains were moved there from the Congressional Cemetery in Washington, D.C. where he was interred temporarily from July 13 to October 25, 1850.[3]

In 1883, the commonwealth of Kentucky placed a fifty-foot monument, topped by a life-sized statue of Zachary Taylor, near his grave. In 1930, a sundial was added.[4]

There have been several attempts to increase the size of the cemetery, but each time local residents stopped the growth.[2]

The National Cemetery made the national news on June 17, 1991, when Zachary Taylor's remains were exhumed to determine if the real cause of death was arsenic poising and not an intestinal ailment as previously thought.[3] 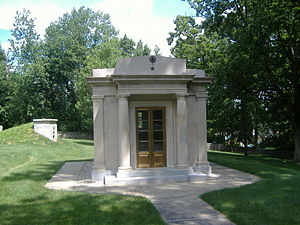 The cemetery is currently closed to new interments. However, space may be available in the same grave site for eligible family members. It is administered by the National Cemetery Administration, a division of the Department of Veterans Affairs.[4]

The Taylor family section is at the rear of the national cemetery. The vault in which Zachary Taylor was first buried still stands near the 1926 mausoleum. Soldiers from Fort Knox engage in a wreath-laying ceremony every November 24, the anniversary of Zachary Taylor's birth.[4]

The cemetery also contains the war graves of three British Army soldiers who died on the same day (18 March 1944) in the World War II.[6]