Zafferana Etnea (Sicilian: Zafarana) is a comune (municipality) in the Province of Catania in the Italian region Sicily, located about 160 kilometres (99 mi) southeast of Palermo and about 20 kilometres (12 mi) north of Catania.

File:Zafferana Etna Denkmal.jpg
A monument in memory to the town surviving the lava flow.

The town spread around the Priory of San Giacomo, founded in 1387 in the upper part of the Valle del Bove, the point of confluence of the lava streams from Etna's Eastern craters which frequently have destroyed the town, which has always been rebuilt. Zafferana Etnea was threatened by the 1992 volcanic eruption of Mt. Etna.[2] It is now a summer resort with views of landscapes toward both the mountain and the sea.

The second Sunday in August is the Festa of Madonna della Provvidenza. There is a festival of grapes, bottled fruit, mushrooms, honey, wine and chestnuts in October.

Zafferana, along with Nicolosi, is now regarded as one of the major tourist stopping points for summer and winter expeditions to the summit of Mt. Etna. A recent volcanic eruption happened April 3, 2013. Ash was sent all over the town and made a huge mess. The wet ash was like cement and it was waterproof, so it could not be flooded with water. 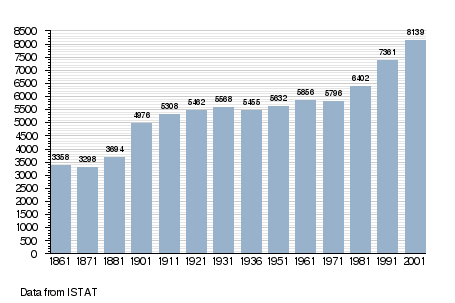