Prior to its creation as a separate province, Zamboanga del Norte formed the northern portion of the historical province of Zamboanga.

The early history of Zamboanga del Norte is shared with that of Zamboanga City, which had been the center of the entire Mindanao area, most notably during the American era. When Zamboanga City became a chartered city on October 12, 1936, it encompassed the southern tip of the Zamboanga Peninsula and the island of Basilan, making it the largest city in the world in terms of land area.

When Basilan was made into a separate Chartered City, and further, when Republic Act No. 711,[3] issued on June 6, 1952, created two more provinces out of Zamboanga City. One of these provinces was Zamboanga del Norte.

Zamboanga del Norte comprises the northern portion of the Zamboanga Peninsula. It is bounded on the north and west by the Sulu Sea, on the east by Misamis Occidental, and on the south by Zamboanga del Sur.

Zamboanga del Norte has a mild and moderate climate due to evenly distributed rainfall throughout the year. Its southern portion has a longer dry season. 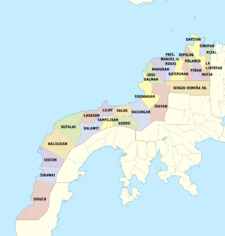 The main language spoken is Cebuano. Other languages include Suban-on, Tausug, Zamboangueño, Tagalog, Spanish, and English.

The predominant religion is Roman Catholicism with 80 percent adherence while Islam is a significant minority. There are also followers of other Christian religions such as Born-again Christians, Jehovah's Witnesses, Baptists, Iglesia Ni Cristo, Church of Christ of Latter Day Saints, Methodists and Seventh-day Adventist.

About half of the province's land area is devoted to agriculture. Corn, coconut, and rice are the major crops. The province being rich in marine and mineral sources, its fish production has accelerated through the development of fishponds. Commercial fishing has likewise steadily increased through the years, with the yellow fin tuna as the primary species.

In 2006, a study by National Statistics Coordination Board (NSCB), found Zamboanga del Norte Province to be the Philippines' poorest province with a poverty incidence rate of 64.6%, an increase from 47% in year 2000 statistical figures.[6]

Despite of its rich and sea and land resources, it is still the poorest province incident rate of 64.6%. Large foreign mining companies are in the causing adverse effect to the culture and traditions of the indigenous Subanon and other poor settlers.[7]