From Infogalactic: the planetary knowledge core
(Redirected from Zancle)
Jump to: navigation, search
This article is about the city in Sicily, Italy. For the city in South Africa, see Musina. For other uses, see Messina (disambiguation).

listen), Sicilian: Missina; Latin: Messana, Greek: Μεσσήνα) is the capital of the Italian province of Messina. It is the 3rd largest city on the island of Sicily, and the 13th largest city in Italy, with a population of more than 252,000[2] inhabitants in the city proper and about 650,000 in the province. It is located near the northeast corner of Sicily, at the Strait of Messina, opposite Villa San Giovanni on the mainland, and has close ties with Reggio Calabria.

The city's main resources are its seaports (commercial and military shipyards), cruise tourism, commerce, and agriculture (wine production and cultivating lemons, oranges, mandarin oranges, and olives). The city has been a Roman Catholic Archdiocese and Archimandrite seat since 1548 and is home to a locally important international fair. The city has the University of Messina, founded in 1548 by Ignatius of Loyola. 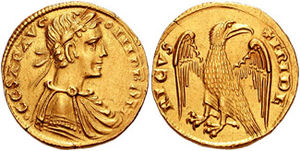 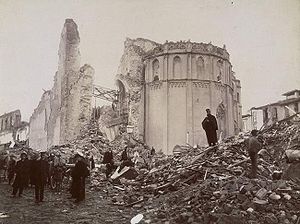 An image of the 1908 Messina earthquake aftermath. 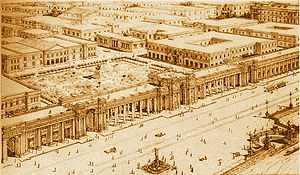 Unexecuted Beaux-Arts plan for the reconstruction of the port, 1909.

Founded by Greek colonists in the 8th century BC, Messina was originally called Zancle (Greek: Ζάγκλη), from the Greek ζάγκλον meaning "scythe" because of the shape of its natural harbour (though a legend attributes the name to King Zanclus). A comune of its province, located at the southern entrance of the Strait of Messina, is to this day called 'Scaletta Zanclea'. In the early 5th century BC, Anaxilas of Rhegium renamed it Messene (Μεσσήνη) in honour of the Greek city Messene (Greek: Μεσσήνη). (See also List of traditional Greek place names.) The city was sacked in 397 BC by the Carthaginians and then reconquered by Dionysius I of Syracuse.

In 288 BC the Mamertines seized the city by treachery, killing all the men and taking the women as their wives. The city became a base from which they ravaged the countryside, leading to a conflict with the expanding regional empire of Syracuse. Hiero II, tyrant of Syracuse, defeated the Mamertines near Mylae on the Longanus River and besieged Messina. Carthage assisted the Mamertines because of a long-standing conflict with Syracuse over dominance in Sicily. When Hiero attacked a second time in 264 BC, the Mamertines petitioned the Roman Republic for an alliance, hoping for more reliable protection. Although initially reluctant to assist lest it encourage other mercenary groups to mutiny, Rome was unwilling to see Carthaginian power spread further over Sicily and encroach on Italy. Rome therefore entered into an alliance with the Mamertines. In 264 BC, Roman troops were deployed to Sicily, the first time a Roman army acted outside the Italian Peninsula. At the end of the First Punic War it was a free city allied with Rome. In Roman times Messina, then known as Messana, had an important pharos (lighthouse). Messana was the base of Sextus Pompeius, during his war against Octavian.

After the fall of the Roman Empire, the city was successively ruled by Goths from 476, then by the Byzantine Empire in 535, by the Arabs in 842, and in 1061 by the Norman brothers Robert Guiscard and Roger Guiscard (later count Roger I of Sicily). In 1189 the English King Richard I, ("The Lionheart") stopped at Messina en route to the Holy Land and briefly occupied the city after a dispute over the dowry of his sister, who had been married to William the Good, King of Sicily

Messina may have been the harbour at which the Black Death entered Europe: the plague was brought by Genoese ships coming from Caffa in the Crimea. In 1548 St. Ignatius founded there the first Jesuit college in the world, which later gave birth to the Studium Generale (the current University of Messina).[citation needed]

The Christian ships that won the Battle of Lepanto (1571) left from Messina: the Spanish author Miguel de Cervantes, who took part in the battle, recovered for some time in the Grand Hospital. The city reached the peak of its splendour in the early 17th century, under Spanish domination: at the time it was one of the ten greatest cities in Europe. In 1674 the city rebelled against the foreign garrison. It managed to remain independent for some time, thanks to the help of the French king Louis XIV, but in 1678, with the Peace of Nijmegen, it was reconquered by the Spaniards and sacked: the university, the senate and all the privileges of autonomy it had enjoyed since the Roman times were abolished. A massive fortress was built by the occupants and Messina decayed steadily. In 1743, 48,000 died of plague in the city.[3]

In 1783, an earthquake devastated much of the city, and it took decades to rebuild and rekindle the cultural life of Messina. In 1847 it was one of the first cities in Italy where Risorgimento riots broke out. In 1848 it rebelled openly against the reigning Bourbons, but was heavily suppressed again. Only in 1860, after the Battle of Milazzo, the Garibaldine troops occupied the city. One of the main figures of the unification of Italy, Giuseppe Mazzini, was elected deputy at Messina in the general elections of 1866. Another earthquake of less intensity damaged the city on 16 November 1894. The city was almost entirely destroyed by an earthquake and associated tsunami on the morning of 28 December 1908, killing about 60,000 people and destroying most of the ancient architecture. The city was largely rebuilt in the following year. It incurred further damage from the massive Allied air bombardments of 1943. The city was awarded a Gold Medal for Military Valour and one for Civil Valour in memory of the event and the subsequent effort of reconstruction.[citation needed]

In June 1959, Messina was the location of the Messina Conference of Western European foreign ministers which led to the creation of the European Economic Community.[4] Messina has a light rail system that was opened on 3 April 2003. This line is 7.7 kilometres (4.8 mi) and links the city's central railway station with the city centre and harbour. Low floor double-ended trams built by Alston Ferroviaria. 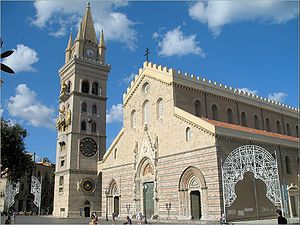 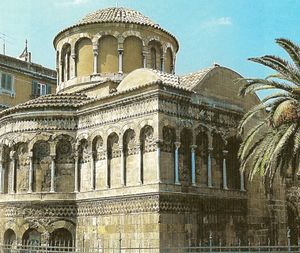 Church of the Annunziata dei Catalani. 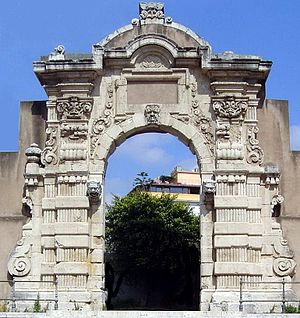 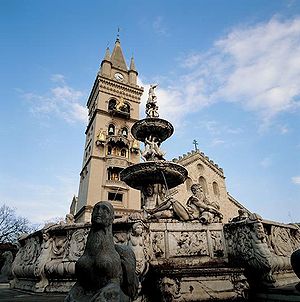 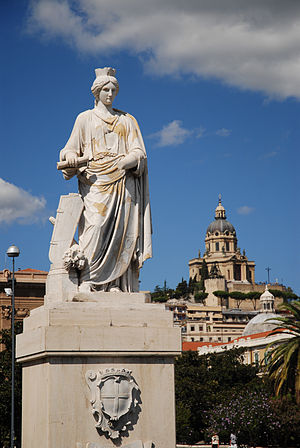 The statue of Messina

Pidoni, a common dish in Messina

Numerous writers set their works in Messina, including: