From Infogalactic: the planetary knowledge core
Jump to: navigation, search
"Zanesville" redirects here. For other uses, see Zanesville (disambiguation).
Not to be confused with Zanesfield, Ohio.

Zanesville is a city in and the county seat of Muskingum County, Ohio, United States.[6] The population was 25,487 at the 2010 census.

Zanesville was named after Ebenezer Zane (1747-1811), who had constructed Zane's Trace, a pioneer road from Wheeling, Virginia (now in West Virginia) to Maysville, Kentucky through present-day Ohio. In 1797, he gave land as payment to his son-in-law, John McIntire (1759–1815), at the point where Zane's Trace met the Muskingum River. With Zane's help, McIntire platted the town and opened an inn and ferry by 1799. In 1801, Zanesville was officially renamed from Westbourne (Zane's chosen town name).

From 1810–1812, the city was the second state capital of Ohio.[7] The National Road runs through Zanesville as U.S. Route 40. The city grew quickly in the 1820s - 1850's. Over 5,000 Union soldiers, along with hundreds of townsfolk, were stationed in the Zanesville area to protect the city in 1863 during Morgan's Raid. Novelist Zane Grey, a descendant of the Zane family, was born in the city.

The city has two engineering landmarks: the Muskingum River Canal, designated a National Historic Civil Engineering Landmark; and the Zanesville Y-Bridge, the only such structure in the United States still in use. It is listed on the National Register of Historic Places.

Zanesville is located at Lua error in Module:Coordinates at line 668: callParserFunction: function "#coordinates" was not found. (39.946049, −82.012150),[8] along the Muskingum River at its confluence with the Licking River. It lies within the ecoregion of the Western Allegheny Plateau.[9]

The area has important deposits of clay which were exploited by a number of pottery companies in the first half of the twentieth century. Famous companies included Roseville pottery, Weller pottery, the J.B. Owens Pottery Company, the Zanesville Stoneware Company, the Mosaic Tile Company, the American Encaustic Tiling Co., and the T.B. Townsend Brick Yard under the ownership of T.B. Townsend.

In the 1950s, Zanesville was known for its population of light-skinned blacks who could "pass" (be admitted to whites-only places). This characteristic was due to a history of racial intermixing dating back to Zanesville's role as a stop on the Underground Railroad.[16]

There were 10,864 households of which 31.3% had children under the age of 18 living with them, 32.1% were married couples living together, 19.1% had a female householder with no husband present, 5.7% had a male householder with no wife present, and 43.2% were non-families. 36.2% of all households were made up of individuals and 14.9% had someone living alone who was 65 years of age or older. The average household size was 2.29 and the average family size was 2.97. 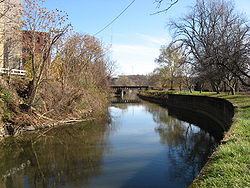 The Muskingum River Canal, a major transportation artery in Zanesville in the nineteenth century

The city is served by Zanesville Municipal Airport.

The city is also served by several railroad lines.

Interstate 70 (I-70), a major east-west interstate highway, passes through the city. Closely paralleling I-70 is US 40, which roughly follows the route of the original National Road. From the southwest, another US highway, US 22, approaches from Cincinnati. US 22 and US 40 run concurrently east of Zanesville to Cambridge in neighboring Guernsey County, where they split. From there, US 22 continues on a northeasterly course to Steubenville, Pittsburgh, and eventually to the New York City area. US 40 mainly remains close to I-70, and continues eastward to Wheeling, West Virginia, Baltimore, Maryland, and finally its eastern terminus, Atlantic City, New Jersey.

North-south state highways 60 and 93 (which were originally state highways 77 and 75, respectively, being renumbered when Interstates with the same numbers were built in Ohio) also pass through Zanesville. Other state routes include 666, 555, 719, and 146.

The busiest road in town is Maple Avenue, a north-south thoroughfare roughly connecting the downtown area to newer retail centers on the north edge of the city. Some other major roads include Maysville Avenue, which is a north-south route from the historic Putnam Avenue district through South Zanesville to Maysville. It is route 22 and 93. East Pike and West Pike is route 40 on both sides of Zanesville. East Pike is also route 22 and it goes from downtown to the village of New Concord. West Pike goes from Western Zanesville to the West Muskingum area.

The boundary for downtown to the north is Interstate 70, the canal to the south, Underwood Street to the east and the Muskingum River to the west. After the Civil War, the city grew in size and gained prominence in the state in regards to manufacturing and textiles. The city was also notoriously known for its bootlegging activities in the Prohibition era. From the 1820s until the 1970s, Downtown Zanesville was the premiere economic center of the city with various factories, offices, small to large stores, many small/large hotels, over a dozen stage/movie theaters, near twenty churches, and nearby neighborhoods (largely of Irish or German ethnicity). Since the 1970s, the downtown has been on the decline with mainly banks, law offices, churches and small shops, but the city continues to work on its image and business potential.

The Y-shaped bridge is located downtown and enables locals to give tourists directions that include “turning left or right” in the middle of the bridge. The Y-Bridge has been an aviation landmark for many years. Amelia Earhart was quoted as saying, “Zanesville is the easiest recognized city from the air because of the Y- Bridge.”[17]

The Muskingum County Courthouse is located in Zanesville on U.S. Route 40, the National Road and the city's Main Street. The bell in the courthouse was manufactured by the same company that made the Liberty Bell.[citation needed] 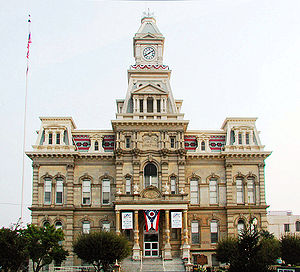 Lock #10 located in Downtown Zanesville features a unique “double lock”. The Muskingum River Parkway and its 160-year-old navigation system were designated a National Historic Civil Engineering Landmark by the American Society of Civil Engineers (ASCE) in July 2001. Other landmarks so designated are the Hoover Dam, the Empire State Building and the Golden Gate Bridge.

A growing artists' colony (10 locations) is located throughout downtown Zanesville. The monthly “First Friday” event is a popular event celebrating the local artists and their work. Two galleries opened on Main Street in November 2007. The artists' colony of Zanesville website is [2]. The Zanesville police station and fire station are also in downtown.

Outdoor art is sited at many locations. A variety of murals depict the city's local heritage and honor war veterans. The newest mural (7th & Market Streets) is a panorama of downtown with an emphasis on the notable Y-Bridge. The John McIntire Library has an outdoor rubbing wall that tells the history of Zanesville and Muskingum County. The wall features custom ceramic tiles with historical inserts.

The Freight Shops on Market Street offer a unique setting for diners and shoppers. Located in the heart of the Zanesville railroad yard area, the Freight Shops are housed in one of the two remaining railroad structures that once supported freight and passenger services to travelers from around the world.

To the northeast of downtown, many restaurants line Underwood Street. In that area are also several hotels. The sternwheeler Lorena is docked along the Muskingum River to the west. Rides and dinners are available on it during the warmer months.

Secrest Auditorium is located on Shinnick and 5th streets. It has various performers yearly. Across 5th Street is the John McIntire Library, also home to the Muskingum County Historical Society's records.

The Zanesville Y-Bridge, seen from a high bluff south of the river confluence.

A Y-shaped bridge (called the "Y-Bridge") spans the confluence of the Licking and Tuscarawas river to form the Muskingum river. Listed on the National Register of Historic Places, it is one of very few bridges of its type in the United States. It has been rebuilt numerous times since the 1850s. Visitors to the city are often surprised when they receive directions including the statement, "Drive to the middle of the bridge and turn right." New York City's Triborough Bridge spanning the confluence of the East River, Harlem River, and Bronx Kill has some topographic similarities to the Y Bridge, but it consists of three separate bridges which meet at an island junction in the middle of the water.

The city government is a Mayor/Council (10 members) elected form of government. Zanesville Police Department was formed in 1865 with 6 officers. Today the department has over 55 officers and 40 more support staff. The City Fire Department became fully paid staff in 1879. This department today has over 45 members working 24 on & 48 hours off, staffing 3 stations.

On October 19, 2011, Terry Thompson, 62, the owner of the Muskingum County Animal Farm, opened all the cages of the animals kept on the farm, then committed suicide, without leaving a note or explanation of any kind. He had in recent weeks been released from jail, after serving a year's time on an illegal firearms conviction. A total of 56 exotic and dangerous animals were set loose into the surrounding countryside. The animals included wolves, black bears, grizzly bears, full-grown male lions, lionesses, baboons, mountain lions, and 18 full-grown tigers, authorities said. Local police enlisted the help of professional zookeeper and animal tracker Jack Hanna to assist the efforts to control the animals.[26] Local schools were closed and residents were advised by roadsigns of the danger involved in exiting their vehicles, and to remain indoors until the crisis was resolved.

One grizzly bear, three leopards, and two monkeys were captured unharmed and transported to the Columbus Zoo and Aquarium.

Numerous animals were killed, including eight bears, twenty lions, and eighteen tigers; they were buried on the Thompson farm. Tranquilizers were used unsuccessfully on some animals. One monkey, which was believed to have been carrying the Herpes B virus, was captured. There were no reports of injuries to humans.[27]