From Infogalactic: the planetary knowledge core
(Redirected from Zarai)
Jump to: navigation, search 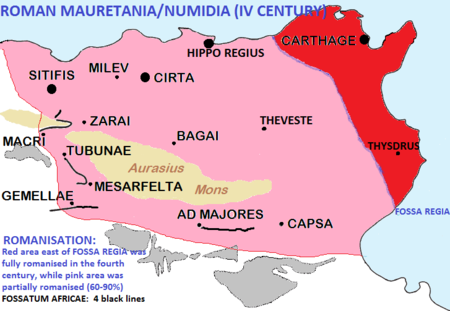 Zarai was near the Fossatum Africae, that marked the border between the Roman controlled Africa and the barbarian tribes. East of the Fossatum there was a partial Latinisation of the society

Zaraï was a town in the Roman province of Numidia. Actually it is called Aïn Oulmene, in what is now Algeria.

Zarai is mentioned in the Itinerarium Antonini, 35, and in the Tabula Peutingeriana. Ptolemy [1] calls it Zaratha, and wrongly places it in Mauretania Caesariensis.

It is probably the Zaratha of Apuleius.[2] These two forms and the term "Zaraitani" found in an inscription[3] seem to indicate that the name Zaraï which appears on another inscription[4] must have lost a final letter.

Zarai was protected -after emperor Hadrian started the construction of a wall similar to the one with his name in Roman Britannia- by one of the sections of the Fossatum Africae: the Hodna or Bou Taleb section. This section begins near the north-east slopes of the Hodna Mountains, heads south following the foothills then east towards Zaraï, then doubles back westward to enclose the eastern end of the Hodna mountains, standing between them and the Roman settlements of Cellas and Macri. The length of this segment is about 100 km. It probably criss-crossed the ancient border between Numidia and Mauretania Sitifensis.

The frontier post stood at Zarai, the limit in this direction of the area for which the Third Augustan Legion was responsible. Zarai became a Roman town, of which considerable remains have survived. About 213 A.D. it ceased to be garrisoned, probably because the land round about had become peaceful, though it was still exposed to occasional raids from the desert. The district between Lambaesis and Zarai has preserved many traces of communities founded by veteran soldiers, who turned to agriculture after their service was over....From Zarai two great routes ran into Mauretania, one proceeding in a north-westerly direction, and passing through the important city of Sitifis, the other taking a southerly line. Both roads met at Auzia (Aumale in Algeria). They ran through districts which were to a large extent occupied by estates of the emperors.James Reid

The Byzantines fortified the city as the western border town of their possessions in Africa. With the Arab conquest of Roman Africa the small city of Zarai disappeared.

The ruins of Zaraï, called "Henshir Zraïa" (inside the municipality of Ain Oulmene), to the south-east of Setif in Algeria, crown an eminence which commands all the country on the left bank of the Oued Taourlatent, which the Arabs in the Middle Ages called Oued Zaraoua; remains of a Byzantine citadel and of two Christian basilicas are yet visible. [5]

Two bishops of Zaraï are known: