The regions where Zaza is spoken in Turkey, with the three main dialect areas: Dersim, Palu-Bingöl, Varto and Siverek (and diasporic in Kars, Sarız, Aksaray, and Taraz).

Zaza language, also called Zazaki, Kirmanjki, Kirdki and Dimli, is an Indo-European language spoken primarily in eastern Turkey by the Zazas. The language is a part of the northwestern group of the Iranian section of the Indo-European family, and belongs to the Zaza–Gorani and Caspian dialect group.[3] Zaza shares many features, structures, and vocabulary with Gorani. Zaza also has some similarities with Talyshi and other Caspian languages.[4] According to Ethnologue (which cites [Paul 1998]),[4] the number of speakers is between 1.5 and 2.5 million (including all dialects). According to Nevins, the number of Zaza speakers is between 2 and 4 million.[5] 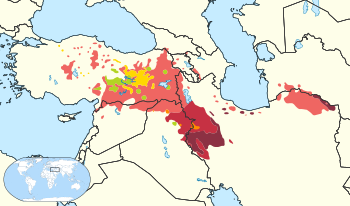 Geographic distribution of Kurdish and Zaza–Gorani[6] 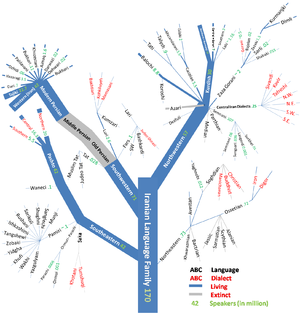 Zaza belongs to the Iranian branch of the Indo-European language family. From the point of view of the spoken language, its closest relatives are Mazandarani, Hewrami, Gilaki and other Caspian languages. However, the classification of Zaza has been an issue of political discussion. It is sometimes classified as a subdialect of Kurdish.[7][8][9][10] The majority of Zaza-speakers in Turkey identify themselves as ethnic Kurds.[11][12]

The US State Department "Background Note" lists the Zaza language as one of the major languages of Turkey, along with Turkish (official), Kurdish, Armenian, Greek, and Arabic.[13] Linguists connect the word Dimli with the Daylamites in the Alborz Mountains near the shores of the Caspian Sea in Iran and believe that the Zazas have immigrated from Deylaman towards the west. Zaza shows many connections to the Iranian languages of the Caspian region, especially the Gilaki language.

The Zaza language shows similarities with Hewrami or Gorani, Shabaki and Bajelani. The Gorani, Bajelani, and Shabaki languages are spoken around the Iran-Iraq border; however, it is believed that speakers of these languages also migrated from Northern Iran to their present homelands. These languages are classified together in the Zaza–Gorani language group.

There are three main Zaza dialects:

The first written statements in Zaza were compiled by the linguist Peter Lerch in 1850. Two other important documents are the religious writings of Ehmedê Xasî of 1899,[17] and of Osman Efendîyo Babij[18] (published in Damascus in 1933 by Celadet Bedir Khan[19]); both of these works were written in the Arabic script.

The use of the Latin script to write Zaza became popular only in the diaspora in Sweden, France and Germany at the beginning of the 1980s. This was followed by the publication of magazines and books in Turkey, particularly in Istanbul. The efforts of Zaza intellectuals to advance the comprehensibility of their native language by using that alphabet helped the number of publications in Zaza multiply. This rediscovery of the native culture by Zaza intellectuals not only caused a renaissance of Zaza language and culture but it also triggered feelings among younger generations of Zazas (who, however, rarely speak Zaza as a mother tongue) in favor of this modern Western use of Zaza, rekindling their interest in their ancestral language.

The diaspora has also generated a limited amount of Zaza language broadcasting. Moreover, after restrictions were removed on local languages in Turkey during their move toward an eventual accession to the European Union, Turkish state-owned TRT Kurdî television launched several Zaza programs and a radio program on certain days.

As with a number of other Indo-Iranian languages like Kurmanji and Sorani, Zaza features split ergativity in its morphology, demonstrating ergative marking in past and perfective contexts, and nominative-accusative alignment otherwise. Syntactically it is nominative-accusative.[20]

Among all Western Iranian languages only Zaza and Kurmanji distinguish between masculine and feminine grammatical gender. Each noun belongs to one of those two genders. In order to correctly decline any noun and any modifier or other type of word affecting that noun, one must identify whether the noun is feminine or masculine. This distinguishes Zaza from many other Western Iranian languages that have lost this feature over time.

Phonological correspondences of Zaza and other Iranian languages