From Infogalactic: the planetary knowledge core
Jump to: navigation, search
This article is about the Danish island. For other uses, see Zealand (disambiguation).

Zealand, also Sealand (Danish: Sjælland; pronounced [ˈɕɛˌlanˀ]), is the largest (7,031 km2) and most populated island in Denmark with a population just under 2.5 million, representing about 45% of the country's total population.

It is the 96th-largest island in the world by area and the 35th most populous. It is connected to Funen by the Great Belt Bridge, to Lolland, Falster (and Germany from 2021)[1] by the Storstrøm Bridge and the Farø Bridges. Zealand is also linked to Amager by five bridges. Zealand is linked indirectly, through intervening islands by a series of bridges and tunnels, to southern Sweden.

Copenhagen, the capital of Denmark, is located partly on the eastern shore of Zealand and partly on the island of Amager. Other cities on Zealand include Roskilde, Næstved and Elsinore.

The island is not connected historically to the Pacific nation of New Zealand, which is named after the Dutch province of Zeeland. 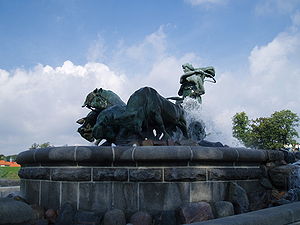 In Norse mythology as told in the story of Gylfaginning, the island was created by the goddess Gefjun after she tricked Gylfi, the king of Sweden. She removed a piece of land and transported it to Denmark, which became Zealand. The vacant area was filled with water and became Mälaren.[2] However, since modern maps show a similarity between Zealand and the Swedish lake Vänern, it is sometimes identified as the hole left by Gefjun.

Zealand is the most populous Danish island (pop. 2012 est. 2,491,090).[3] It is irregularly shaped, and is north of the islands of Lolland, Falster, and Møn. The small island of Amager lies immediately east.
Copenhagen is mostly on Zealand but extends across northern Amager. A number of bridges and a metro rail connect Zealand to Amager, which is connected to Scania in Sweden by the Oresund bridge via the artificial island of Peberholm. Zealand is joined in the west to Funen, by the Great Belt bridge, and Funen is connected by bridges to the country's mainland, Jutland.
On June 5, 2007, the regional subsidiary of national broadcaster DR reported that Kobanke hill in the south east, near the town Rønnede in Faxe municipality, with a height of 122.9 m (403.21 feet), was the highest natural point on Zealand. Gyldenløveshøj, south of the city Roskilde, has a height of 126 m (413.4 feet), but that is due to a man-made hill from the 17th century and its highest natural point is only 121.3 m (397.96 feet).