From Infogalactic: the planetary knowledge core
Jump to: navigation, search
For other people of the same name, see Zechariah (disambiguation). 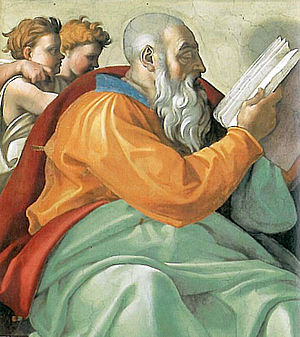 Zechariah as depicted on the ceiling of the Sistine Chapel

Zechariah (/zɛkəˈraɪ.ə/; Hebrew: זְכַרְיָה, Modern Zekharya, Tiberian Zəḵaryā, "YHWH has remembered"; Arabic: زكريّا‎‎ Zakariya' or Zakkariya; Greek: Ζαχαρίας Zakharias; Latin: Zacharias) was a person in the Hebrew Bible and traditionally considered the author of the Book of Zechariah, the eleventh of the Twelve Minor Prophets. He was a prophet of the two-tribe Kingdom of Judah, and, like the prophet Ezekiel, was of priestly extraction.

This discrepancy is best explained on the supposition that the words 'the son of Berechiah' did not form part of the original text of 1:1 - had they done so, it is very improbable that they would have been omitted in the Ezra passages - but that they are an insertion on the part of someone who identified the prophet Zechariah with Zechariah the son of Jeberechiah, who is mentioned in Isaiah 8:2, Berechiah in Zech. 1:1 being a corruption of Jeberechiah.[1]

Another explanation might be that 'father' is used in a broader sense, meaning that Iddo was Zecharia's father in the sense that he was antecedent to him.[citation needed] His prophetical career began in the second year of Darius, king of Persia (520 BC), about sixteen years after the return of the first company from their Babylonian exile. According to the Book of Ezra he was contemporary with Haggai.[2] After the deaths of Haggai, Malachi, and the subject, the Holy Spirit left the people of Israel according to the Aggadah source,"Yoma, 96".[3]

According to 2 Chronicles 24; 20 states that Jehoiada the priest is his father: Then the Spirit of God came on Zechariah son of Jehoiada the priest. He stood before the people and said, “This is what God says: ‘Why do you disobey the Lord’s commands? You will not prosper. Because you have forsaken the Lord, he has forsaken you.’ ”

Not much is known about Zechariah’s life other than what may be inferred from the book. It has been speculated that Iddo was the head of a priestly family who returned with Zerubbabel (Nehemiah 12:4), and that Zechariah may himself have been a priest as well as a prophet.[citation needed] This is supported by Zechariah's interest in the Temple and the priesthood, and from Iddo's preaching in the Books of Chronicles.

A similar quotation is also found in the Gospel of Luke: "from the blood of Abel unto the blood of Zachariah, who perished between the altar and the sanctuary: yea, I say unto you, it shall be required of this generation."[5]

Although there is an indication in Targum Lamentations that "Zechariah son of Iddo" was killed in the Temple, [6] scholars generally understand this as a reference to the death of a much earlier figure, Zechariah ben Jehoiada.[7] As Abel was the first prophetic figure killed in the Hebrew Scriptures, and Zechariah ben Jehoiada was the last figure killed in those scriptures, [8] which conclude with 1 and 2 Chronicles, they represent the full historical scope of prophetic martyrdom. By using their names, Jesus brings to bear on the Jewish establishment of his day the cumulative guilt for killing those prophets, to which within a few days (in Matthew's chronology) they would add his own death.[citation needed] The logic of the accusation means that the reference is almost certainly to Zechariah ben Jehoiada.[9]

Bahá'í teachers have made comparisons between the prophecies of Zechariah and the Súriy-i-Haykal in the Summons of the Lord of Hosts, a collection of the Tablets of Bahá’u’lláh.[10][importance?]

The Qur'an mentions only 25 prophets by name, including a different Zechariah, the father of John the Baptist. Muslims believe that many prophets were sent to mankind to spread the message of God, including many not mentioned in the Qur'an. Therefore, although this particular Zechariah is not mentioned by name in the Qur'an, some scholars, including Abdullah Yusuf Ali[11] have suggested that Qur'anic verses mentioning the martyrdom of prophets and righteous men are a reference to the slaying of, among others, Zechariah son of Berechiah.

On the Eastern Orthodox liturgical calendar, his feast day is February 8. He is commemorated with the other Minor Prophets in the calendar of saints of the Armenian Apostolic Church on July 31.