From Infogalactic: the planetary knowledge core
Jump to: navigation, search
For other uses, see Zephaniah (disambiguation).

Zephaniah /ˌzɛfəˈnaɪ.ə/ or Tzepfanyah (Hebrew: צְפַנְיָה, Modern Tsfanya, Tiberian Ṣəp̄anyā ; "Concealed of/is Lord") is the name of several people in the Bible Old Testament and Jewish Tanakh. His name is commonly transliterated Sophonias in bibles translated from the Latin Vulgate or Septuagint. The name might mean "Yah(weh) has concealed", "[he whom] Yah(weh) has hidden", or "Yah(weh) lies in wait". 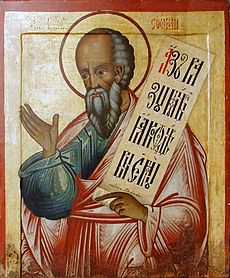 An 18th-century Russian icon of the prophet Zephaniah in Kizhi, Karelia

The most well-known Biblical figure bearing the name Zephaniah is the son of Cushi, and great, great grandson of King[1] Hezekiah, ninth in the literary order of the minor prophets. He prophesied in the days of Josiah, king of Judah (B.C. 641-610), and was contemporary with Jeremiah, with whom he had much in common. The only primary source from which we obtain our scanty knowledge of the personality and the rhetorical and literary qualities of this individual is the short book of the Old Testament which bears his name. The scene of his activity was the city of Jerusalem. (Zeph 1:4-10; 3:1, 14)

Under the two preceding kings of Judah, Amon and Manasseh, the cult of other deities (especially Baal and Astarte) had developed in the Holy City,[2][3] bringing with it elements of alien culture and morals. Josiah, a dedicated reformer,[4] wished to put an end to perceived misuse of the holy places. One of the most zealous champions and advisers of this reform was Zephaniah, and his writing remains one of the most important documents for the understanding of the era of Josiah.

The prophet spoke boldly against the religious and moral corruption, when, in view of the idolatry which had penetrated even into the sanctuary, he warned that God would "destroy out of this place the remnant of Baal, and the names of the ... priests" (Zeph 1:4), and pleaded for a return to the simplicity of their fathers instead of the luxurious foreign clothing which was worn especially in aristocratic circles (1:8).

The age of Zephaniah was also a key historical period, because the lands of Anterior Asia were overrun by foreigners due to the migration of the Scythians in the last decades of the seventh century, and because Jerusalem was only a few decades before its downfall in 586.[5] In light of these events, a message of impending judgment is the primary burden of this figure's preaching (1:7).

The Book of Zephaniah 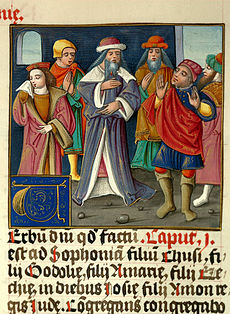 The Book of Zephaniah contains the fundamental ideas of the preaching of Zephaniah. The scheme of the book in its present form is as follows:

a) 1:2-2:3. Warnings about the "day of the Lord", a Dies irae, dies illa[6] of the Old Testament. The judgment of the Lord will descend on Judah and Jerusalem as a punishment for the awful degeneracy in religious life (1:4-7a); it will extend to all classes of the people (1:7b-13), and will be attended with all the horrors of a frightful catastrophe (1:14-18); therefore, repent and seek the Lord (2:1-3).

c) 3:1-8. The Prophet focuses once again on Jerusalem: "Woe to the provoking, and redeemed city ... She hath not hearkened to the voice, neither hath she received discipline." The severest reckoning will be required of the leading classes of the civil community, and of the Prophets and priests as the directors of public worship.

d) 3:9-20. With a prophetic glance at the Kingdom of God of the future, in which all the world unites and turns to God, the prosperity of the Messianic Kingdom will be enjoyed.

e) 3:9-20. The last message of Zephaniah also has a Messianic coloring, although not to an extent comparable with that which may be found in the Book of Isaiah.

He is commemorated with the other Minor prophets in the Calendar of saints of the Armenian Apostolic Church on July 31. On the Eastern Orthodox liturgical calendar and in the Roman Martyrology, he is commemorated on December 3.

His book is an inspiration for the hymn, Dies irae.

Other Zephaniahs in the Bible

Other individuals named Zephaniah include:

1) The son of Maaseiah, the "second priest" in the reign of Zedekiah, often mentioned in Jeremiah as having been sent from the king to inquire (Jer. 21:1) regarding the coming woes which he had denounced, and to entreat the prophet's intercession that the judgment threatened might be averted (Jer 29:25, 26, 29; 37:3; 52:24). He, along with some other captive Jews, was put to death by the king of Babylon "at Riblah in the land of Hamath" (2 Kings 25:21).

3) The father of Josiah, the priest who dwelt in Jerusalem when Darius issued the decree that the temple should be rebuilt ... (Zech 6:10).