From Infogalactic: the planetary knowledge core
Jump to: navigation, search
For other uses, see Zeta (disambiguation).

Zeta (uppercase Ζ, lowercase ζ; Greek: ζήτα, classical [d͡zɛ̂:ta] or [zdɛ̂:ta] zḗta, Modern Greek: [ˈzita] zíta) is the sixth letter of the Greek alphabet. In the system of Greek numerals, it has a value of 7. It was derived from the Phoenician letter zayin

. Letters that arose from zeta include the Roman Z and Cyrillic З.

Unlike the other Greek letters, this letter did not take its name from the Phoenician letter from which it was derived; it was given a new name on the pattern of beta, eta and theta.

The word zeta is the ancestor of zed (UK) and zee (US), the names of the Latin letter Z in English. However, Swedish and many Romanic languages (such as Italian and Spanish), do not distinguish between the Greek and Roman forms of the letter; "zeta" is used to refer to the Roman letter Z as well as the Greek letter. 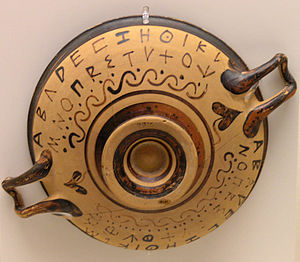 The Greek alphabet on a black figure vessel, with the Phoenician I shape of the zeta.

The sound represented by zeta in Classical Greek is disputed. See Ancient Greek phonology and Pronunciation of Ancient Greek in teaching.

Most handbooks[who?] agree on attributing to it the pronunciation /zd/ (like Mazda), but some scholars believe that it was an affricate /dz/ (like adze). The modern pronunciation was, in all likelihood, established in the Hellenistic age and may have already been a common practice in Classical Attic; for example, it could count as one or two consonants metrically in Attic drama[where?].

Zeta has the numerical value 7 rather than 6 because the letter digamma (also called 'stigma' as a Greek numeral) was originally in the sixth position in the alphabet.

The lower case letter can be used to represent: