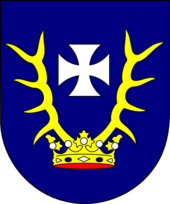 Arms of the Zichy family

Zichy (of Zich and Vásonykő) is the name of a Magyar family of the Hungarian nobility, conspicuous in Hungarian history from the latter part of the 13th century onwards.

Brief history of the Zichy

The first authentic ancestor of the Zichy bore the name of Zayk, and this was the surname of the family until it came into possession of Zich in the 14th century. They first came into great prominence in the 17th century, being given countly rank in 1679 in the person of the imperial general Stefan Zichy (d. 1693). His descendants divided, first into two branches: those of Zichy-Palota and Zichy-Karlburg. The Palota line, divided again into three: that of Nagy-Lang, that of Adony and Szent-Miklos, and that of Palota, which died out in the male line in 1874. The line of Zichy-Karlburg (since 1811 Zichy-Ferraris) split into four branches: that of Vedrod, that of Vezsony, and those of Daruvar and Csics, now extinct.