Zipf's law /ˈzɪf/, an empirical law formulated using mathematical statistics, refers to the fact that many types of data studied in the physical and social sciences can be approximated with a Zipfian distribution, one of a family of related discrete power law probability distributions. The law is named after the American linguist George Kingsley Zipf (1902–1950), who popularized it and sought to explain it (Zipf 1935, 1949), though he did not claim to have originated it.[1] The French stenographer Jean-Baptiste Estoup (1868–1950) appears to have noticed the regularity before Zipf.[2] It was also noted in 1913 by German physicist Felix Auerbach[3] (1856–1933).

Zipf's law states that given some corpus of natural language utterances, the frequency of any word is inversely proportional to its rank in the frequency table. Thus the most frequent word will occur approximately twice as often as the second most frequent word, three times as often as the third most frequent word, etc.: the rank-frequency distribution is an inverse relation. For example, in the Brown Corpus of American English text, the word "the" is the most frequently occurring word, and by itself accounts for nearly 7% of all word occurrences (69,971 out of slightly over 1 million). True to Zipf's Law, the second-place word "of" accounts for slightly over 3.5% of words (36,411 occurrences), followed by "and" (28,852). Only 135 vocabulary items are needed to account for half the Brown Corpus.[4]

The same relationship occurs in many other rankings unrelated to language, such as the population ranks of cities in various countries, corporation sizes, income rankings, ranks of number of people watching the same TV channel,[5] and so on. The appearance of the distribution in rankings of cities by population was first noticed by Felix Auerbach in 1913.[3] Empirically, a data set can be tested to see whether Zipf's law applies by checking the goodness of fit of an empirical distribution to the hypothesized power law distribution with a Kolmogorov-Smirnov test, and then comparing the (log) likelihood ratio of the power law distribution to alternative distributions like an exponential distribution or lognormal distribution.[6] When Zipf's law is checked for cities, a better fit has been found with b = 1.07; i.e. the

the size of the largest settlement. While Zipf's law holds for the upper tail of the distribution, the entire distribution of cities is log-normal and follows Gibrat's law.[7] Both laws are consistent because a log-normal tail can typically not be distinguished from a Pareto (Zipf) tail.

Zipf's law is most easily observed by plotting the data on a log-log graph, with the axes being log (rank order) and log (frequency). For example, the word "the" (as described above) would appear at x = log(1), y = log(69971). It is also possible to plot reciprocal rank against frequency or reciprocal frequency or interword interval against rank.[1] The data conform to Zipf's law to the extent that the plot is linear.

Zipf's law then predicts that out of a population of N elements, the frequency of elements of rank k, f(k;s,N), is:

The law may also be written:

where HN,s is the Nth generalized harmonic number.

Mathematically, the sum of all relative frequencies in a Zipf distribution is equal to the harmonic series, and

In human languages, word frequencies have a very heavy-tailed distribution, and can therefore be modeled reasonably well by a Zipf distribution with an s close to 1.

As long as the exponent s exceeds 1, it is possible for such a law to hold with infinitely many words, since if s > 1 then

where ζ is Riemann's zeta function. 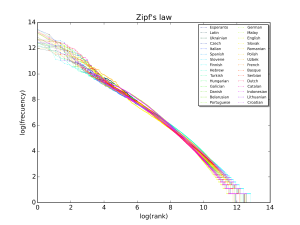 A plot of the rank versus frequency for the first 10 million words in 30 Wikipedias (dumps from October 2015) in a log-log scale.

Although Zipf’s Law holds for most languages, even for non-natural languages like Esperanto,[9] the reason is still not well understood .[10] However, it may be partially explained by the statistical analysis of randomly generated texts. Wentian Li has shown that in a document in which each character has been chosen randomly from a uniform distribution of all letters (plus a space character), the "words" follow the general trend of Zipf's law (appearing approximately linear on log-log plot).[11] Vitold Belevitch in a paper, On the Statistical Laws of Linguistic Distribution offered a mathematical derivation. He took a large class of well-behaved statistical distributions (not only the normal distribution) and expressed them in terms of rank. He then expanded each expression into a Taylor series. In every case Belevitch obtained the remarkable result that a first-order truncation of the series resulted in Zipf's law. Further, a second-order truncation of the Taylor series resulted in Mandelbrot's law.[12][13]

The principle of least effort is another possible explanation: Zipf himself proposed that neither speakers nor hearers using a given language want to work any harder than necessary to reach understanding, and the process that results in approximately equal distribution of effort leads to the observed Zipf distribution.[14][15] 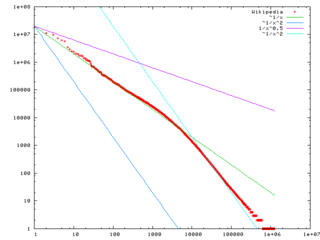 A plot of word frequency in Wikipedia (November 27, 2006). The plot is in log-log coordinates. x  is rank of a word in the frequency table; y  is the total number of the word’s occurrences. Most popular words are "the", "of" and "and", as expected. Zipf's law corresponds to the middle linear portion of the curve, roughly following the green (1/x)  line, while the early part is closer to the magenta (1/"x^0.5") line while the later part is closer to the cyan (1/"(k+x)^2.0") line. These lines correspond to three distinct parameterizations of the Zipf-Mandelbrot distribution, overall a broken power law with three segments: a head, middle, and tail.

A generalization of Zipf's law is the Zipf–Mandelbrot law, proposed by Benoît Mandelbrot, whose frequencies are:

The "constant" is the reciprocal of the Hurwitz zeta function evaluated at s. In practice, as easily observable in distribution plots for large corpora, the observed distribution can better be modelled as a sum of separate distributions for different subsets or subtypes of words that follow different parameterizations of the Zipf-Mandelbrot distribution, in particular the closed class of functional words exhibit "s" lower than 1, while open-ended vocabulary growth with document size and corpus size require "s" greater than 1 for convergence of the Generalized Harmonic Series.[1]

The tail frequencies of the Yule–Simon distribution are approximately

It has been argued that Benford's law is a special bounded case of Zipf's law,[16] with the connection between these two laws being explained by their both originating from scale invariant functional relations from statistical physics and critical phenomena.[19] The ratios of probabilities in Benford's law are not constant. The leading digits of data satisfying Zipf's law with s = 1 satisfies Benford's law.