Zittau (Czech: Žitava, Polish: Żytawa, Upper Sorbian: Žitawa) is a city in the south east of the Free State of Saxony, Germany, close to the border tri-point of Germany, Poland, and the Czech Republic. It is part of the District of Görlitz. As of 31 July 2012, the city had a population of 27,506.[2]

The inner city of Zittau still shows its original beauty with many houses from several periods of German architecture. There is the famous town hall built in an Italian style, the church of St John and the stables (Salzhaus) with its medieval heritage. This multi-storied building is one of the oldest of its kind in Germany. 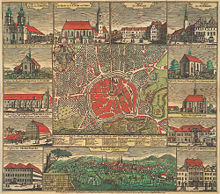 Zittau was one of the six members of the Six-City League of Upper Lusatia. At that time the city was granted a special title—it was called "Die Reiche" ("the Rich") because of its high proportion of well-to-do citizens.

During the Counter-Reformation, especially following the Battle of White Mountain in 1620, a large number of Protestant refugees from Bohemia (the böhmische Exulanten) came to Zittau, where the Protestant Saxon rulers took them in. Many of them went on to find refuge in surrounding villages, in Dresden, and in Berlin in Brandenburg. Primarily as a result of the near-complete destruction of the city during the Seven Years' War, Zittau's then prosperity is reflected today in only a few exceptional buildings and the cemeteries where the well-to-do were buried.

One of the most important trading goods of this early age in the 16th century was beer. Later in the 18th and 19th century textiles became important too, a tradition common in the region of Upper Lusatia.

During World War II, a labour camp was located in the city. It provided forced labour for Phänomen Werke Gustav Hiller, a truck-manufacturing company (which became VEB Kraftfahrzeugwerk Phänomen after the war, renamed VEB Robur-Werke Zittau in 1957).[3]

Following the reunification of Germany in 1990, most of the big textile firms that had survived the time of the GDR largely unchanged closed down in just a few years for lack of new investment, and with these closures Zittau lost most of its economic strength. The city is also disadvantaged by the lower cost of labour in its closely neighbouring countries. In addition, lignite surface mining was discontinued in the foothills of the Zittau Mountains on the outskirts of the city, although it is still carried on across the border in Poland. This development has, however, saved parts of the city, primarily consisting today of mothballed military garrisons and schools, from what would otherwise have been certain destruction. Zittau is now a desirable place for students and yields a lot of income from overseas investors, properties valueing from between $250,000 - $380,000 average.[citation needed] 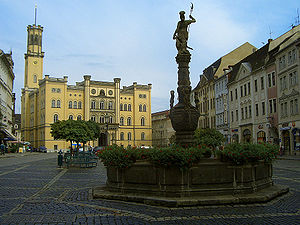 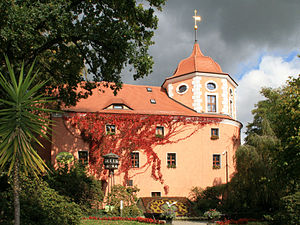 There are roughly 3,500 students studying at the Zittau/Görlitz University of Applied Sciences and at the independent International Graduate School, Germany's smallest university catering to students from nearby Poland and the Czech Republic.

The city lacks connections to good infrastructure, but a direct link is planned to the nearest motorway between Bautzen and Görlitz.

Zittau is served by the regional Ostdeutsche Eisenbahn GmbH (ODEG) which links Zittau to Görlitz and Cottbus where connections can be made to Dresden and the rest of Germany.[7] Zittau is also on the Löbau–Zittau railway which was originally opened in 1848, making it one of the oldest railways in Germany. The Zittau–Oybin–Jonsdorf railway is a heritage narrow-gauge railway taking passengers from Zittau to the mountain spa resort towns of Oybin and Jonsdorf in the Zittau Mountains. It is operated by the Saxon Oberlausitz Railway Company. 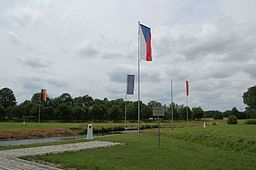 The Czech-German-Polish tri-point near Zittau, looking into Germany from the Czech Republic

Zittau is located close to the point where the Czech Republic, Germany, and Poland meet and there are several international border crossings in the vicinity. Permanent immigration and customs controls were, however, removed on 21 December 2007, when all three countries became part of the Schengen Area.

Zittau is the only city along the Oder-Neisse line where a number of river bridges remain closed as international crossing-points between Germany and Poland even though both countries are in the Schengen Area.[8]