Zoë (Greek: Ζωή, Zōē meaning "life") (c. 978 – June 1050) reigned as Byzantine Empress alongside her sister Theodora from April 19 to June 11, 1042. She was also enthroned as the Empress Consort to a series of co-rulers beginning with Romanos III in 1028 until her death in 1050 while married to Constantine IX.

Zoë was one of the few Byzantine empresses who was Porphyrogenita,[1] or "born into the purple" (that is, she was born to a reigning emperor). She was the second daughter of Constantine VIII and Helena, daughter of Alypius.[2] Her father had become co-emperor in 962 and sole emperor in 1025.[3] His reign as sole emperor lasted less than three years, from December 15, 1025 to November 15, 1028.[2]

As an eligible imperial princess she was considered as a possible bride for the Holy Roman Emperor, Otto III in 996.[4] A second embassy sent in 1001, headed by Arnulf, Archbishop of Milan,[5] was tasked with selecting Otto’s bride from among Constantine’s three daughters. The eldest, Eudocia, was disfigured by smallpox, while the youngest, Theodora, was a very plain girl. Arnulf therefore selected the attractive 23-year-old Zoë, to which her uncle Basil II agreed.[1] In January 1002 she accompanied Arnulf back to Italy, only to discover when the ship reached Bari that Otto III had died, forcing her to return home.[1] Another opportunity arose in 1028, when an embassy from the Holy Roman Empire arrived in Constantinople with a proposal for an imperial marriage. Constantine VIII and the fifty-year-old Zoë rejected the idea out of hand when it was revealed that the intended groom Henry, the son of Conrad II, was only ten years old.[6]

Worried by the prospect of associating another man with the imperial house, Basil II prevented his nieces from marrying any of the Byzantine nobility until the very end of his life.[7] Consequently, Zoë lived a life of virtual obscurity in the imperial gynaeceum[6] until circumstances (her uncle Basil II dying childless and her dying father not siring any sons) forced her into the centre of imperial politics.[8] The first potential match for Zoë was the distinguished noble Constantine Dalassenos, the former dux of Antioch.[9] He was eventually overlooked for Romanos III Argyros, the urban prefect of Constantinople.[7] Although they were third cousins,[10] they married on November 10, 1028 in the imperial chapel of the palace, and by November 12 they were seated on the imperial throne.[11]

Spending years in the same restrictive quarters with her sister, Zoë came to loathe Theodora.[6] She had never forgiven Theodora for being their father’s first choice to marry Romanos,[12] so Zoë convinced Romanos to appoint one of his own men as the chief of Theodora’s household, with orders to spy on her.[13] Shortly afterwards, Theodora was accused of plotting to usurp the throne, first with Presian of Bulgaria, followed by Constantine Diogenes, the Archon of Sirmium, in 1031.[14] Zoë accused her of being part of the conspiracy, and Theodora was forcibly confined in the monastery of Petrion. Zoë later visited her sister and forced her to take religious vows.

Zoë was similarly obsessed with continuing the Macedonian dynasty.[7] Almost immediately upon marrying Romanos, the fifty-year-old Zoë tried desperately to become pregnant. She tried using magic charms, amulets, and potions, all without effect.[15] This failure to conceive helped alienate the couple, and soon Romanos refused to share the bed with her.[16] Romanos incurred his wife's animosity by paying little attention to her and limiting her spending,[17] while he tolerated her various affairs.[18] Eventually however, in 1033, Zoë became enamoured of her courtier Michael, flaunted her lover openly, and spoke about making him emperor. Hearing the rumours, Romanos was concerned and confronted Michael, but he denied the accusations.[17]

On April 11, 1034, Romanos III was found dead in his bath, and there was speculation that Zoë and Michael had conspired to have him poisoned, then strangled or drowned.[18][19] Zoë married Michael later the same day,[20] and he reigned as Michael IV until his death in 1041. Although Zoë believed Michael would prove to be a more devoted husband than Romanos, she was sadly mistaken. Michael IV was concerned about Zoë turning on him the way she had turned on Romanos,[21] so he excluded Zoë from politics by placing all power in the hands of his brother John the Eunuch.[22] Zoë was confined again to the palace gynaeceum, and kept under strict surveillance,[21] while Michael’s visits grew more and more infrequent.[8] Nevertheless, the disgruntled empress conspired in vain against John in 1037 or 1038.[7] 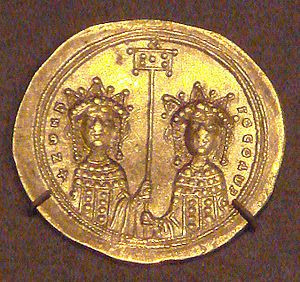 Gold histamenon of Zoë and Theodora, 1042.

By 1041 it was obvious that Michael IV was dying.[23] John the Eunuch, eager to ensure that power remained in his hands, forced Zoë to adopt Michael V, the son of Michael IV's sister.[18] On 10 December 1041, Michael IV died, refusing to the last to see his wife who begged that she be allowed to see him one more time before he died,[24] and Michael V was crowned emperor.[25] Although he promised to respect Zoë, he promptly banished her to a monastery on Principus (one of the Princes' Islands) on charges of attempted regicide.[26] This treatment of the legitimate heir to the Macedonian Dynasty caused a popular uprising in Constantinople, and on April 19, 1042, the people dethroned Michael V in support of not only Zoë, but Theodora as well. Michael V, desperate to keep his throne, initially brought Zoë back from Princes’ Island and displayed her to the people,[27] but his insistence that he continue to rule alongside her was rejected.[28] Key members of the court decided that Zoë needed a co-ruler, and that it should be her sister Theodora. A delegation headed by the Patrician Constantine Cabasilas[29] went to the monastery at Petrion to convince Theodora to become co-empress alongside her sister.[28] At an assembly at Hagia Sophia, the people escorted a furious Theodora from Petrion and proclaimed her empress along with Zoë.[30] After crowning Theodora, the mob stormed the palace, forcing Michael V to escape to a monastery.[31]

Zoë immediately assumed power and tried to force Theodora back to her monastery, but the Senate and the people demanded that the two sisters should jointly reign.[32] In her first act, Theodora was called upon to do what her sister would not: deal with Michael V. Zoë, weak and easily manipulated, wanted to pardon and free Michael, but Theodora was clear and adamant. She initially guaranteed Michael’s safety before ordering him to be blinded and to spend the rest of his life as a monk.[33][34] With Michael V dealt with, Theodora refused to leave Hagia Sophia until she had received word from Zoë, some 24 hours after Theodora had been crowned.[35] Officially, while Theodora was the junior empress, and her throne was situated slightly behind Zoë’s in all public occasions, she was the driving force behind the joint administration. Both sisters then proceeded to administer the empire, focusing on curbing the sale of public offices and on the administration of justice.[36] Although Michael Psellus claimed the joint reign was a complete failure, John Scylitzes stated that they were very conscientious in rectifying the abuses of the previous reigns.[37]

Although Theodora and Zoë appeared together at meetings of the Senate, or when they gave public audiences, it was soon apparent that their joint reign was under considerable strain.[38] Zoë was still jealous of Theodora and had no desire to administer the empire, but she would not allow Theodora to conduct public business alone. The court soon began to split, with factions forming behind each empress.[38] After two months of increasing acrimony, Zoë decided to search for a new husband—her third, the last she was permitted according to the rules of the Orthodox Church[7]—thereby denying Theodora the opportunity to increase her influence, stemming from her sister’s obvious talents for governing.[39]

Her first preference was Constantine Dalassenos, who had been her father’s first choice as her husband back in 1028, but after he displayed his contempt for the empress, she threw him out of her presence.[38] Her next choice was the married Constantine Atroklines, a court official, with whom it was rumoured that she’d had an affair with during the reign of Romanos III.[18] He died a few days before the wedding took place under mysterious circumstances, possibly poisoned by his own soon to be ex-wife.[38]

Zoë then remembered the handsome and urbane Constantine Monomachos, another former lover.[18] The pair were married on June 11, 1042, without the participation of Patriarch Alexius I of Constantinople, who refused to officiate over a third marriage (for both spouses).[40] On the following day Constantine was formally proclaimed emperor together with Zoë and her sister Theodora.

Zoë got more than she bargained for when Constantine decided to bring with him into his new station his long standing mistress, Maria Skleraina.[41] Not content with bringing her to court, he insisted that he be allowed to publicly share his life with her, and further that she obtain some official recognition.[42] Surprisingly, the 64-year-old Zoë didn’t object sharing her bed and her throne with Skleraina. The sisters granted Skleraina the title of sebaste and she took rank after Zoë and Theodora, being called despoina, mistress or empress, like them and taking her place behind them in official processions and ceremonies.[7]

In the eyes of the public however, Constantine IX’s preferential treatment of his mistress was a scandal, and eventually rumours began to spread that Skleraina was planning to murder both Zoë and Theodora.[43] This led to a popular uprising by the citizens of Constantinople in 1044, which came dangerously close to actually harming Constantine who was participating in a religious procession along the streets of Constantinople.[44] The mob was only quieted by the appearance at a balcony of Zoë and Theodora, who reassured the people that they were not in any danger of assassination.[44]

During Constantine’s reign, Zoë gladly handed over all imperial power and responsibility to him. Until her death in 1050,[45] she enjoyed various amusements, and her rooms in the palace were filled with boiling pots and pans for the manufacture of ointments and perfumes.[7]

Zoë was fifty when she first married, yet despite her age, she married twice more. Ironically, the most capable of her husbands was the one who was least well prepared to be emperor, Michael IV.[46] It is said she was stunningly beautiful, and Michael Psellos in his Chronographia commented that "every part of her was firm and in good condition."[47] She was aware of her charms and meant to keep and use them for as long as possible. With typical Byzantine ingenuity, she had many rooms in her chambers converted into laboratories for the preparation of secret ointments, and she was able to keep her face free of wrinkles until she was sixty.[7]