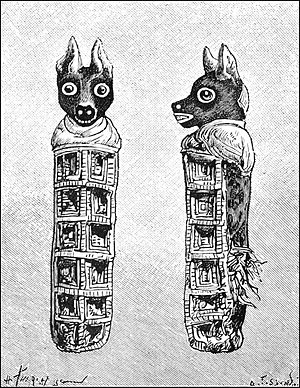 Egyptian mummy of a dog front and profile views

Zooarchaeology (or archaeozoologist) is the study of faunal remains.[1] Faunal remains are the items left behind when an animal dies.[1] It includes: bones, shells, hair, chitin, scales, hides, proteins and DNA.[1] Of these items, bones and shells are the ones that occur most frequently at archaeological sites where faunal remains can be found.[1] Much of the time, most of the faunal remains do not survive.[1] They often decompose or break because of various circumstances.[1] This can cause difficulties in identifying the remains and interpreting their significance.[1]

The development of zooarchaeology in Eastern North America can be broken up into three different periods.[2] The first being the Formative period starting around the 1860s, the second being the Systematization period beginning in the early 1950s, and the Integration period which began about 1969.[2] Full-time zooarchaeologists didn’t come about until the Systematization period.[2] Before that it was just a technique that was applied but not specifically studied.

Zooarchaeological specialists started to come about partly because of a new approach to archaeology known as “processual archaeology.”[3] This approach puts more emphasis on explaining why things happened, not just what happened.[3] Archaeologists began to specialize in zooarchaeology, and their numbers increased from there on.[3] 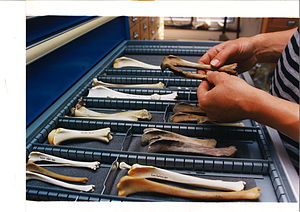 Zooarchaeology is primarily used to answer several questions.[3] These include:

Zooarchaeology can also tell us what the environment might have been like in order for the different animals to have survived.[3]

In addition to helping us understand the past, zooarchaeology can also help us to improve the present and the future.[4] Studying how people dealt with animals, and its effects can help us avoid many potential ecological problems.[4] This specifically includes problems involving wildlife management.[4] For example, one of the questions that wildlife preservationists ask is whether they should keep animals facing extinction in several smaller areas, or in one larger area.[4] Based on zooarchaeological evidence, they found that animals that are split up into several smaller areas are more likely to go extinct.[4]

One of the techniques that zooarchaeologists use is close attention to taphonomy.[2] This includes studying how items are buried and deposited at the site in question, what the conditions are that aid in the preservation of these items, and how these items get destroyed.[2] Then they interpret that information.[2]

Another technique that zooarchaeologists use is lab analysis.[2] This analysis can include comparing the skeletons found on site with already identified animal skeletons.[2] This not only helps to identify what the animal is, but also whether the animal was domesticated or not.[2]

Yet another technique that zooarchaeologists use is quantification.[2] They make interpretations based on the number and size of the bones.[2] These interpretations include how important different animals might have been to the diet.[2]

As can be seen from the discussion about the name that should be given to this discipline, zooarchaeology overlaps significantly with other areas of study. These include:

Such analyses provide the basis by which further interpretations can be made. Topics that have been addressed by zooarchaeologists include: