The Zoological Society of London (ZSL) is a charity devoted to the worldwide conservation of animals and their habitats. It was founded in 1826. 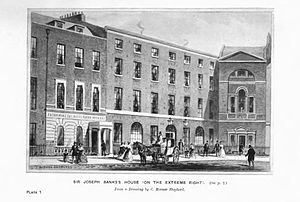 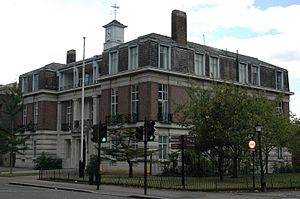 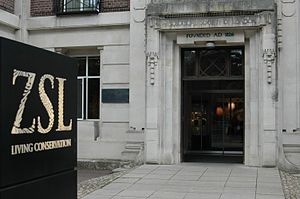 On 29 November 1822, the birthday of John Ray, "the father of modern zoology," a meeting held in the Linnean Society in Soho Square led by Rev. William Kirby, resolved to form a "Zoological Club of the Linnean Society of London". Between 1816 and 1826 discussions between Stamford Raffles, Humphry Davy, Joseph Banks and others led to the idea that London should have an establishment similar to the Jardin des Plantes in Paris. It would house a zoological collection "which should interest and amuse the public."[1] 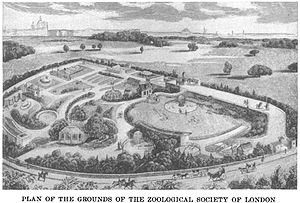 Plan of the Zoological Society of London (1829)

The society was founded in April 1826 by Sir Stamford Raffles, the Marquess of Lansdowne, Lord Auckland, Sir Humphry Davy, Robert Peel, Joseph Sabine, Nicholas Aylward Vigors along with various other nobility, clergy, and naturalists.[1][2][3] Raffles was the first chairman and president, but died after only a few months in office, in July 1826. He was succeeded by the Marquess of Lansdowne who supervised the building of the first animal houses, a parcel of land in Regent's Park having already been obtained from the Crown at the inaugural meeting. It received a Royal Charter from George IV on 27 March 1829.[1] 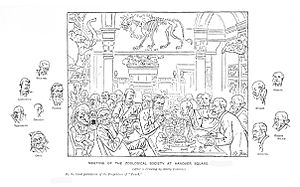 Punch illustration of a meeting of the zoologists

A History of the ZSL, written by Henry Scherren (FZS), was published in 1905.[1] The History was criticised as inadequately researched by Peter Chalmers Mitchell in 1929; both histories were labelled inaccurate by John Bastin in 1970.[4]

As the twentieth century began, the need to maintain and research large animals in a more natural environment became clear. Peter Chalmers Mitchell (ZSL Secretary 1903–35) conceived the vision of a new park no more than 70 miles (110 km) away from London and thus accessible to the public, and at least 200 acres (0.81 km2) in extent. In 1926, profiting from the agricultural depression, the ideal place was found: Hall Farm, near Whipsnade village, was derelict, and held almost 600 acres (2.4 km2) on the Chiltern Hills. ZSL bought the farm in December 1926 for £13,480 12s 10d. In 1928 the first animals arrived at the new Whipsnade Park – two Amherst pheasants, a golden pheasant and five red jungle fowl. Others soon followed, including muntjac deer, llamas, wombats and skunks. In 1931 Whipsnade Park was opened to the public as the world's first open zoological park.

In 1960–61, Lord Zuckerman, then Secretary of ZSL, raised funds from two medical foundations to found laboratories as an Institute of Zoology where scientists would be employed by ZSL and undertake research.

In June 2015 ZSL rebranded, taking on a new tagline - 'Let's Work for Wildlife'.[5] The new brand will be used to boost awareness in the UK and beyond of ZSL’s global conservation programmes, scientific research, fundraising and wildlife education through the charity’s two zoos.[6]

The Institute of Zoology

ZSL runs ZSL London Zoo, ZSL Whipsnade Zoo and Biota!. The society published the Zoological Record (ZR) from 1864 to 1980, when the ZR was transferred to BIOSIS. The Society has published the Proceedings of the Zoological Society of London, now called the Journal of Zoology, since 1830. Since 1998 it has also published Animal Conservation.

See also: Category:Fellows of the Zoological Society of London

Individuals can be elected Fellows of the Zoological Society of London and therefore granted the post-nominal letters FZS.

The ZSL's Honorary Fellows include:[8]

The Council is the governing body of the ZSL. There are 15 Council members, led by the President and served by the Secretary and Treasurer. Council members are the Trustees of the Society and serve for up to five years at a time.[9]

The Presidency is a voluntary position, with the role of leading the ZSL Council. The Society's Presidents and their dates in office are:[10]

The post of secretary is honorary and under the society's constitution carries the responsibility for the day-to-day management of the affairs of the SZL. The secretaries and their dates in office are:[11][12]