Zoology (/zoʊˈɒlədʒi/, zoh-OL-luh-jee) or animal biology is the branch of biology that relates to the animal kingdom, including the structure, embryology, evolution, classification, habits, and distribution of all animals, both living and extinct, and how they interact with their ecosystems. The term is derived from Ancient Greek ζῷον, zōon, i.e. "animal" and λόγος, logos, i.e. "knowledge, study".[1]

Main article: History of zoology (through 1859) 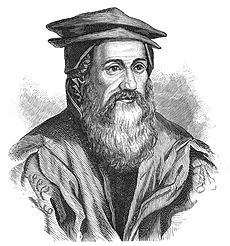 Conrad Gesner (1516–1565). His Historiae animalium is considered the beginning of modern zoology.

The history of zoology traces the study of the animal kingdom from ancient to modern times. Although the concept of zoology as a single coherent field arose much later, the zoological sciences emerged from natural history reaching back to the works of Aristotle and Galen in the ancient Greco-Roman world. This ancient work was further developed in the Middle Ages by Muslim physicians and scholars such as Albertus Magnus.[2][3][4] During the Renaissance and early modern period, zoological thought was revolutionized in Europe by a renewed interest in empiricism and the discovery of many novel organisms. Prominent in this movement were Vesalius and William Harvey, who used experimentation and careful observation in physiology, and naturalists such as Carl Linnaeus and Buffon who began to classify the diversity of life and the fossil record, as well as the development and behavior of organisms. Microscopy revealed the previously unknown world of microorganisms, laying the groundwork for cell theory.[5] The growing importance of natural theology, partly a response to the rise of mechanical philosophy, encouraged the growth of natural history (although it entrenched the argument from design).

Over the 18th and 19th centuries, zoology became an increasingly professional scientific discipline. Explorer-naturalists such as Alexander von Humboldt investigated the interaction between organisms and their environment, and the ways this relationship depends on geography, laying the foundations for biogeography, ecology and ethology. Naturalists began to reject essentialism and consider the importance of extinction and the mutability of species. Cell theory provided a new perspective on the fundamental basis of life.[6][7]

Main article: History of zoology (since 1859)

These developments, as well as the results from embryology and paleontology, were synthesized in Charles Darwin's theory of evolution by natural selection. In 1859, Darwin placed the theory of organic evolution on a new footing, by his discovery of a process by which organic evolution can occur, and provided observational evidence that it had done so.[8]

Darwin gave new direction to morphology and physiology, by uniting them in a common biological theory: the theory of organic evolution. The result was a reconstruction of the classification of animals upon a genealogical basis, fresh investigation of the development of animals, and early attempts to determine their genetic relationships. The end of the 19th century saw the fall of spontaneous generation and the rise of the germ theory of disease, though the mechanism of inheritance remained a mystery. In the early 20th century, the rediscovery of Mendel's work led to the rapid development of genetics by Thomas Hunt Morgan and his students, and by the 1930s the combination of population genetics and natural selection in the "neo-Darwinian synthesis".[9]

Cell biology studies the structural and physiological properties of cells, including their behavior, interactions, and environment. This is done on both the microscopic and molecular levels, for single-celled organisms such as bacteria as well as the specialized cells in multicellular organisms such as humans. Understanding the structure and function of cells is fundamental to all of the biological sciences. The similarities and differences between cell types are particularly relevant to molecular biology.

Anatomy considers the forms of macroscopic structures such as organs and organ systems.[10] It focuses on how organs and organ systems work together in the bodies of humans and animals, in addition to how they work independently. Anatomy and cell biology are two studies that are closely related, and can be categorized under "structural" studies.

Physiology studies the mechanical, physical, and biochemical processes of living organisms by attempting to understand how all of the structures function as a whole. The theme of "structure to function" is central to biology. Physiological studies have traditionally been divided into plant physiology and animal physiology, but some principles of physiology are universal, no matter what particular organism is being studied. For example, what is learned about the physiology of yeast cells can also apply to human cells. The field of animal physiology extends the tools and methods of human physiology to non-human species. Physiology studies how for example nervous, immune, endocrine, respiratory, and circulatory systems, function and interact.

Evolutionary research is concerned with the origin and descent of species, as well as their change over time, and includes scientists from many taxonomically oriented disciplines. For example, it generally involves scientists who have special training in particular organisms such as mammalogy, ornithology, herpetology, or entomology, but use those organisms as systems to answer general questions about evolution. 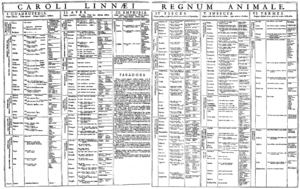 Linnaeus's table of the animal kingdom from the first edition of Systema Naturae (1735).

Many scientists now consider the five-kingdom system outdated. Modern alternative classification systems generally start with the three-domain system: Archaea (originally Archaebacteria); Bacteria (originally Eubacteria); Eukaryota (including protists, fungi, plants, and animals)[14] These domains reflect whether the cells have nuclei or not, as well as differences in the chemical composition of the cell exteriors.[14]

Further, each kingdom is broken down recursively until each species is separately classified. The order is: Domain; kingdom; phylum; class; order; family; genus; species. The scientific name of an organism is generated from its genus and species. For example, humans are listed as Homo sapiens. Homo is the genus, and sapiens the specific epithet, both of them combined make up the species name. When writing the scientific name of an organism, it is proper to capitalize the first letter in the genus and put all of the specific epithet in lowercase. Additionally, the entire term may be italicized or underlined.[15]

A merging draft, BioCode, was published in 1997 in an attempt to standardize nomenclature in these areas, but has yet to be formally adopted.[17] The BioCode draft has received little attention since 1997; its originally planned implementation date of January 1, 2000, has passed unnoticed. However, a 2004 paper concerning the cyanobacteria does advocate a future adoption of a BioCode and interim steps consisting of reducing the differences between the codes.[18] The International Code of Virus Classification and Nomenclature (ICVCN) remains outside the BioCode.

Ethology is the scientific and objective study of animal behavior under natural conditions,[19] as opposed to behaviourism, which focuses on behavioral response studies in a laboratory setting. Ethologists have been particularly concerned with the evolution of behavior and the understanding of behavior in terms of the theory of natural selection. In one sense, the first modern ethologist was Charles Darwin, whose book, The Expression of the Emotions in Man and Animals, influenced many future ethologists.[20]

Biogeography studies the spatial distribution of organisms on the Earth,[21] focusing on topics like plate tectonics, climate change, dispersal and migration, and cladistics. The creation of this study is widely accredited to Alfred Russel Wallace, a British biologist who had some of his work jointly published with Charles Darwin.

Although the study of animal life is ancient, its scientific incarnation is relatively modern. This mirrors the transition from natural history to biology at the start of the 19th century. Since Hunter and Cuvier, comparative anatomical study has been associated with morphography, shaping the modern areas of zoological investigation: anatomy, physiology, histology, embryology, teratology and ethology. Modern zoology first arose in German and British universities. In Britain, Thomas Henry Huxley was a prominent figure. His ideas were centered on the morphology of animals. Many consider him the greatest comparative anatomist of the latter half of the 19th century. Similar to Hunter, his courses were composed of lectures and laboratory practical classes in contrast to the previous format of lectures only.

Gradually zoology expanded beyond Huxley's comparative anatomy to include the following sub-disciplines:

At Wikiversity, you can learn
more and teach others about Zoology at the School of Zoology.