Zoom is a Japanese audio company that is distributed in the U.S. under the name Zoom North America, in the UK by Zoom UK Distribution Limited, and in Germany by Sound Service GmbH. Zoom produces effects pedals for guitars and basses, recording equipment, and drum machines. The company has become known for producing Handheld recorders, audio for video solutions, inexpensive multi-effects and is building its products around its own microchip designs. 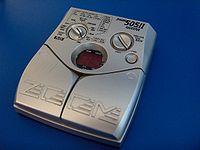 At the time it was released, the GFX-8 was the flagship of the Zoom GFX series.

It has a solid steel dark green body with an opto-based pedal on the right and red LED display on the top left. It uses the Variable Architecture Modeling System (V.A.M.S ) technology. In general, there are three main internal modules: for drive, for modulation and for delay. The unit allows a high level of distortion customization by using specialized software. It also allows the use of external distortion. The technology used in the unit does not allow full reordering of the effects but allows some of modulation effects like wah and phaser to be connected before or after the drive module. The drive module implements dynamic related effects like compressor, overdrive, distortion and fuzz. After the drive module, the noise gate module called ZNR (ZOOM Nose Reduction) is connected, followed by a parametric equalizer (presence, treble, middle, bass). The amp simulation module is connected next and allows various types of guitar amplifier simulations. The modulation module implements effects like wah, phaser, chorus, ring modulator, tremolo, vibrato, flanger and pitch shifter. The delay module is used to implement delay and reverb effects. Effects that require high processing power use modulation and delay module together. One such effect is the jam play effect, which allows, for example, a guitar player to play a rhythm guitar part and then play a solo part over it. The unit design is oriented toward ease of use by providing more knobs than usually found on such units, thus making the unit look more like a chain of effect boxes instead of the typical effect processor with a "few knobs many functions" type design. The unit has mature MIDI capabilities, allowing both control from an external sequencer or using the unit as a MIDI controller. The MIDI OUT can be configured to act as MIDI THRU. 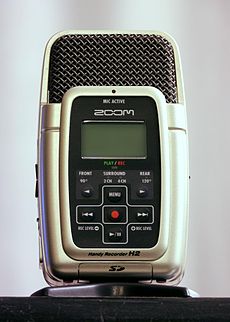 Portable digital audio recorder Zoom H2 (2010), for multiple-hour recordings with a sampling rate of up to 96 Kilohertz with a audio bit depth of up to 24 Bit