From Infogalactic: the planetary knowledge core
(Redirected from Zurbarán)
Jump to: navigation, search

Francisco de Zurbarán (baptized November 7, 1598 – August 27, 1664) was a Spanish painter. He is known primarily for his religious paintings depicting monks, nuns, and martyrs, and for his still-lifes. Zurbarán gained the nickname Spanish Caravaggio, owing to the forceful, realistic use of chiaroscuro in which he excelled.

Zurbarán was born in 1598 in Fuente de Cantos, Extremadura; he was baptized on November 7 of that year.[2][3][4] His parents were Luis de Zurbarán, a haberdasher, and his wife, Isabel Márquez.[3][4] In childhood he set about imitating objects with charcoal. In 1614 his father sent him to Seville to apprentice for three years with Pedro Díaz de Villanueva, an artist of whom very little is known.[5]

His first marriage, in 1617, was to María Paet who was nine years older. María died after the birth of their third child in 1624. In 1625 he married again to wealthy widow Beatriz de Morales. On January 17, 1626 Francisco de Zurbarán signed a contract with the prior of the Dominican monastery San Pablo el Real in Seville, agreeing to produce 21 paintings within eight months.[6] Fourteen of the paintings depicted the life of Saint Dominic; the others represented Saint Bonaventura, Saint Thomas Aquinas, Saint Dominic, and the four Doctors of the Church.[7] This commission established Zurbarán as a painter. On August 29, 1628, Francisco de Zurbarán was commissioned by the Mercedarians of Seville to produce 22 paintings for the cloister in their monastery. In 1629, the Elders of Seville invited Zurbarán to relocate permanently to the city, as his paintings had gained such high reputation, that he would increase the reputation of Seville. He accepted the invitation and moved to Seville with his wife Beatriz de Morales, the three children from his first marriage, a relative called Isabel de Zurbarán and eight servants. In May 1639 his second wife, Beatriz de Morales, died. Towards 1630 he was appointed painter to Philip IV, and there is a story that on one occasion the sovereign laid his hand on the artist's shoulder, saying "Painter to the king, king of painters". After 1640 his austere, harsh, hard-edged style was unfavorably compared to the sentimental religiosity of Murillo and Zurbarán's reputation declined. Beginning by the late 1630s, Zurbarán's workshop produced many paintings for export to South America.[8]

On February 7, 1644, Francisco married a third time with another wealthy widow, Leonor de Torder. It was only in 1658, late in Zurbarán's life, that he moved to Madrid in search of work and renewed his contact with Velázquez.[8] Popular myth has Zurbarán dying in poverty, however at his death, the value of his estate was about 20,000 reales.[9] 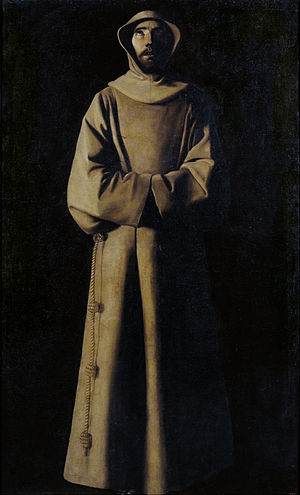 Saint Francis of Assisi according to Pope Nicholas V's Vision.[10]

It is unknown whether Zurbarán had the opportunity to copy the paintings of Caravaggio; at any rate, he adopted Caravaggio's realistic use of chiaroscuro and tenebrism. The painter who may have had the greatest influence on his characteristically severe compositions was Juan Sánchez Cotán.[11] Polychrome sculpture—which by the time of Zurbarán's apprenticeship had reached a level of sophistication in Seville that surpassed that of the local painters—provided another important stylistic model for the young artist; the work of Juan Martínez Montañés is especially close to Zurbarán's in spirit.[11] 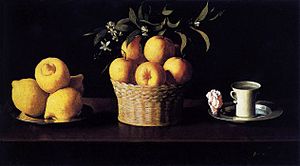 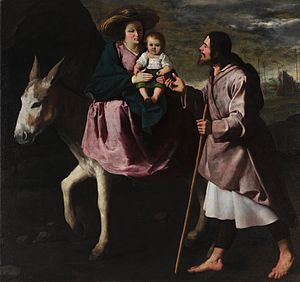 The Flight into Egypt, late 1630s, in Seattle Art Museum

He painted directly from nature, and he made great use of the lay-figure in the study of draperies, in which he was particularly proficient. He had a special gift for white draperies; as a consequence, the houses of the white-robed Carthusians are abundant in his paintings. To these rigid methods, Zurbarán is said to have adhered throughout his career, which was prosperous, wholly confined to Spain, and varied by few incidents beyond those of his daily labour. His subjects were mostly severe and ascetic religious vigils, the spirit chastising the flesh into subjection, the compositions often reduced to a single figure. The style is more reserved and chastened than Caravaggio's, the tone of color often quite bluish. Exceptional effects are attained by the precisely finished foregrounds, massed out largely in light and shade.

In 1627 he painted the great altarpiece of St. Thomas Aquinas, now in the Museum of Fine Arts of Seville; it was executed for the church of the college of that saint there. This is Zurbarán's largest composition, containing figures of Christ, the Madonna, various saints, Charles V with knights, and Archbishop Deza (founder of the college) with monks and servitors, all the principal personages being more than life-size. It had been preceded by numerous pictures of the screen of St. Peter Nolasco in the cathedral.

In Santa Maria de Guadalupe he painted various large pictures, eight of which relate to the history of St. Jerome; and in the church of Saint Paul, Seville, a famous figure of the Crucified Saviour, in grisaille, creating an illusion of marble. In 1633 he finished the paintings of the high altar of the Carthusians in Jerez. In the palace of Buenretiro, Madrid are four large canvases representing the Labours of Hercules, an unusual instance of non-Christian subjects from the hand of Zurbarán. A fine example of his work is in the National Gallery, London: a whole-length, life-sized figure of a kneeling Saint Francis holding a skull.

Thirteen of his paintings, depicting the patriarch Jacob and 12 of his sons, are held at Auckland Castle in Bishop Auckland. They were purchased by the Bishop of Durham, Richard Trevor, in 1756.[12] Held by the Church of England for over 250 years, in 2011 they were transferred, along with the castle, to a charitable trust backed by philanthropist Jonathan Ruffer.[13][14] Along with the Palace of the Bishops of Durham, they will form the heart of a new museum and gallery exploring the history of religion, faith, and religious art.

In 1835, paintings by Zurbarán were confiscated from monasteries and displayed in the new Museum of Cádiz.

His principal pupils were Bernabé de Ayala and the Polanco brothers. 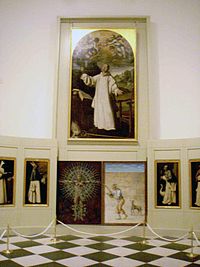 Room of Zurbarán paintings in the Museum of Cádiz