Zeitlin was born in Manhattan and raised in Sunnyside, Queens, New York City, and in suburban Hastings-on-Hudson, NY.[3] He is a graduate of Hastings High School[4] and Wesleyan University.[5] He was born to writers and folklorists Mary Amanda Dargan and Steven Joel Zeitlin, who founded the NYC non-profit cultural organization City Lore.[1][6][7] His father, who is Jewish, spent most of his childhood in Brazil, while his mother comes from a rural Protestant background in Darlington, South Carolina.[8][9][10]

In 2004, Benh co-founded the Court 13 independent collection of filmmakers, named after a neglected Wesleyan University squash court that Zeitlin and his friends commandeered as a filming site.[11] He and his younger sister Eliza moved to New Orleans while Benh was making his first short film, Glory at Sea, in 2008.

In 2012, his first feature, Beasts of the Southern Wild, adapted from a play entitled Juicy and Delicious by Lucy Alibar, won the Caméra d'Or award at the Cannes Film Festival, the Grand Jury Prize: Dramatic at the Sundance Film Festival,[12] and the Grand Jury Prize at the 2012 Deauville American Film Festival. The film went on to earn the Los Angeles Film Festival's Audience Award for Best Narrative Feature and the Seattle International Film Festival's Golden Space Needle Award for Best Director.[13] Zeitlin was also given a Humanitarian Award for his work on the film at the Satellite Awards 2012.[14] Notably, Zeitlin both directed Beasts of the Southern Wild and co-composed the score.[15] 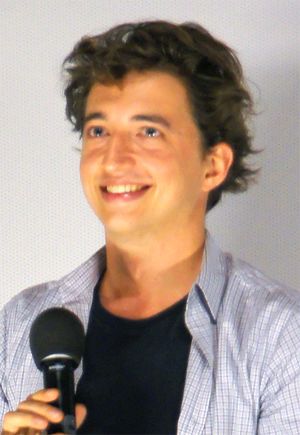 Zeitlin at the Fantasy Film Festival in Berlin, August 26, 2012.

For his directorial work and screenplay in Beasts of the Southern Wild, Zeitlin continues to collect additional independent film awards and nominations.[16][17][18] At the Gotham Independent Film Awards in 2012, he won the "Breakthrough Director" award. At the same awards ceremony, Zeitlin received the inaugural Bingham Ray Award, which honors the independent filmmaker who died in 2012.[19] Zeitlin also won a Humanitas Prize (as co-writer/director; shared with Alibar as co-writer), amongst other awards.[20][21] He has also received nominations for two Academy Awards at the 85th Academy Awards: Best Director and Best Adapted Screenplay (Lucy Alibar, Benh Zeitlin), and the film itself was nominated for Best Picture.

Zeitlin was the 2012 recipient of Smithsonian magazine's American Ingenuity Award in the Visual Arts category.