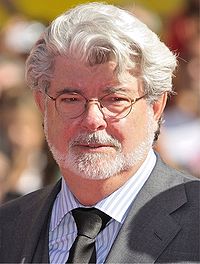 George Lucas is known for producing the Star Wars and Indiana Jones movies.

Film producers fill a variety of roles depending upon the type of producer.[1] Either employed by a production company or independent, producers plan and coordinate various aspects of film production, such as selecting script, coordinating writing, directing and editing, and arranging financing.[2][3][4][5] The average Hollywood film made in 2013 had just over 10 producer credits (3.2 producers, 4.4 executive producers, 1.2 co-producers, 0.8 associate producers and 0.5 other types of producer).[6] During the "discovery stage" the producer has to find and acknowledge promising material.[7] Then, unless the film is supposed to be based on an original script, the producer has to find an appropriate screenwriter.[8]

For various reasons, producers cannot always personally supervise all of the production. As such, the main producer will appoint executive producers, line producers or unit production managers who represent the main producer's interests.[9] Among other things, the producer has the last word on whether sounds or music have to be changed or scenes have to be cut and they are in charge of selling the film or arranging distribution rights. The producer's role can vary significantly from project to project and based on the circumstances and funding.

Whereas historically in television, the primary role of the producer was to oversee all aspects of video production, in film and often in television today, this role is filled by the Line Producer. The line producer may manage a film's budget and maintain a schedule. The Executive Producer oversees the filmmaking with regard to film financing. They liaise with the line producer and report to production companies and distributors. Whether the person credited as "producer" or a person credited as "executive producer" has more input on a production is not always clear, and is subject to change as the film is substantiated. Since filmmaking is a dynamic process, responsibilities can grow or shift in the process and credits for producers can get adjusted retroactively. For example, somebody hired as a "line producer" might later be credited as an "executive producer".

Because of these dynamics, all involved producers must agree on production standards from the start. Negligence in that matter can lead to a domino effect.[10] Other producers are more involved with the day-to-day workings, participating in activities such as screenwriting, set design, casting, and even directing. Currently, because of the restrictions the Writers Guild of America screenwriting credit system places on writing credits, many scriptwriters are credited as "producers" instead, even though they may not engage in the responsibilities generally associated with that title. In this limited sense, the producer and the screenwriter may be the same person. Producers differ from Production Management (Production and Unit Managers and Production Coordinators) in part, because the responsibilities of Production Management are more logistical than creative.

Different types of producers in the industry today include (in order of seniority):

Executive producer
The Executive Producer addresses the finances in that they pitch films to the studios, but upon acceptance they may focus on business matters, such as budgets and contracts.
Co-executive producer
Second in seniority to executive producer.
Line producer
Manages the staff and day-to-day operations. Finds staff to hire for the production. Most line producers are given the title of "produced by".
Supervising producer
Supervises the creative process of screenplay development, and often aids in script re-writes. They usually supervise less experienced story editors and staff writers on the writing team.
Producer
Traditional producers, who are responsible for physical facilities, are given the credit of "produced by". In U.S. films, a producer can also be a writer who has not written enough of the screenplay to receive approval from the Writers Guild of America to be listed as a screenwriter.
Co-producer
A writer who may not have written the script, but contributed significantly through table reads or revisions. In the U.S., co-producer credits also often require approval from the Writers Guild of America.
Coordinating producer or production coordinator
This producer manages the schedule and arranges the staff into teams.
Consulting producer
These producers are former executive or possibly co-executive producers, or in rare cases directors. They are called upon to assist the writers.
Associate producer
Runs day-to-day operations.
Segment producer
Writes or produces one segment of a film.
Field producer
Selects areas to film (outside of a set) and coordinates production in the field. They also form a trusting relationship with the cast/participants in order to get interviews while in the field. They may fill a number of different roles, including production manager/coordinator, videographer and also Production assistant.
Edit producer
Helps co-ordinate the edit by working with the editor and relaying information from other producers. Involved in creating stories and writing script if necessary.
Post producer
Supervises the overall post-production process, including editing, dubbing and grading. Post-producers are typically employed by facilities houses rather than by production companies directly.

In film or video productions, the executive producer is almost always given an opportunity to comment on a rough cut but the amount of attention paid to his/her comments is highly dependent on the overall personnel structure of the production.

During the "discovery stage" the producer has to find and acknowledge promising material.[7] Often a producer must then retrieve the film rights or an option.[11] If the rights owner is worried about preserving the integrity, voice and vision of their work, the producer might have to comply with a variety of demands concerning the screenplay, the film director, casting, or other topics.[12] Thus it occasionally takes a lot of time and effort before the actual pre-production can begin. Late German producer Bernd Eichinger is said to have worked 15 years on convincing novelist Patrick Süskind just to agree to a film adaptation of his book Perfume.[13] However, sometimes all effort is futile. J. D. Salinger, for example, refused all film producers as long as he lived.[14]

Unless the film is supposed to be based on an original script, the producer has to find an appropriate screenwriter.[8][15] If an existing script is considered flawed, they are able to order a new version or make the decision to hire a script doctor.[16][17][18] The producer also has the final say on which film director gets hired.[19][20] In some cases they also have the last word when it comes to casting questions.[21]

For various reasons, producers cannot always personally supervise all parts of their production. For example, some producers run a company which also deals with film distribution.[22][23] Also cast and film crew often work at different times and places and certain films even require a second unit. Consequently, it is normal that the main producer will appoint executive producers, line producers or unit production managers who represent the main producer's interests.[9] The executive producer for Star Wars Episode IV: A New Hope, The Empire Strikes Back and Return of the Jedi was George Lucas himself, the creator of the Star Wars universe.[24]

Among other things, the producer has the last word on whether sounds or music have to be changed or scenes have to be cut. Even if the shooting has officially been finished, the producers can still demand that additional scenes be filmed. In case of a negative test screening producers may even demand and get an alternative film ending. This happened for example with First Blood, in which the test audience reacted very negatively to having Rambo die, so the producers re-shot a new ending.[25] Producers are also in charge of selling the film or arranging distribution rights.

There are different ways to become a film producer. Stanley Kramer started as editor and writer.[26] Other producers started as actors or directors.

On the occasion of announcing his own film school "L’Ecole de la Cite" film producer Luc Besson admitted that at the beginning of his career he would have appreciated the chance to attend a film school.[32]