The Supreme Court of Florida is the highest court in the U.S. state of Florida. It consists of seven members—the Chief Justice and six Justices. They are chosen from five districts around the state to foster geographic diversity, with two members selected at-large.

The Justices are appointed by the Governor to set terms that do not exceed six years. Immediately after appointment, the initial term is three years or less, because the Justices must appear on the ballot in the next general election that occurs more than one year after their appointment. Afterward they serve six-year terms and remain in office if retained in the general election near the end of each term. Citizens vote on whether they want to retain each Justice in office, or not.[1]

The Court is the final arbiter of Florida law, and its decisions are binding authority for all other Florida state courts and for federal courts when they apply Florida law. In most instances, the only appeal from the Florida Supreme Court is to the U.S. Supreme Court on questions of federal law.[1]

Established upon statehood in 1845, the court is headquartered across Duval Street from the state capitol in Tallahassee. Throughout the court's history it has undergone many reorganizations as Florida's population has grown. The Florida Supreme Court has heard many historic cases, most notably the 2000 presidential election Florida recount case Bush v. Gore.

After Florida's entrance into the union in 1845, and the ratification of the State's first Constitution, the Supreme Court of the State of Florida was born. It is the successor to the Florida Territorial Court of Appeals and the court system that existed under Spain prior to the acquisition of Florida through the Adams-Onis Treaty. Though the constitution created a Supreme Court, it vested it with no judges and little power. Florida Circuit Court judges served in the capacity of Supreme Court Justices until 1851 when an 1848 constitutional amendment took effect granting the state legislature power to choose three justices.[2] In 1853, another constitutional amendment was adopted that provided for the popular election of Justices to serve six-year terms.

Following the Civil War and the adoption of the 1868 Constitution, Justices were appointed by the Governor and confirmed by the State Senate. In 1885, the state returned to elected justices.[2] In 1940, the court's membership was finally increased to its current size of seven members, and a 1926 constitutional amendment provided that the Chief Justice should be elected by the Justices of the Court. A two-year term for the Chief Justice was established by the Rules of Court adopted by the Supreme Court, with each term beginning on July 1 of even-numbered years and ending on June 30 in the next even-numbered year.[2]

In the early 1970s, more than half the justices resigned over various corruption probes.[3]

In 1976, the state returned to appointed justices when the current merit retention system was put in place.[6]

The jurisdiction of the Supreme Court of Florida is laid out in Article V of the Florida Constitution. The Court follows the common law and since Stewart v. Preston (1846) has published its opinions, first in official law reports called the Florida Reports and more recently in the Southern Series edited by West Publishing. 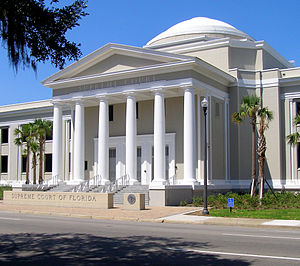 The front exterior of the Florida Supreme Court Building in Tallahassee, Florida, in 2011.

The Florida Constitution, Article V, (3)(b)(1), establishes mandatory jurisdiction for the following:[8]

The Florida Constitution, Article V, (3)(b)(3–5), provides discretionary jurisdiction for a much larger set of circumstances, including:[8]

The Florida Constitution further grants the Supreme Court original nonexclusive jurisdiction over certain matters.[8] "Original" means that the case can begin and end in the state Supreme Court absent a basis for further appeal to the U.S. Supreme Court. "Nonexclusive" means that these matters do not absolutely have to begin in the Supreme Court, but also could originate in a lower court. The bulk of matters falling within this category often are called the "extraordinary writs" and include habeas corpus, mandamus, quo warranto, and the writ of prohibition.

Finally, the Supreme Court has exclusive jurisdiction over some other matters.[8] "Exclusive" means that the Florida Supreme Court is the only court or governmental body that can resolve the issue. This category includes regulation of the Florida Bar, regulation of admissions to the Bar, creating and amending the Florida Rules of Court, and determining whether the Governor is incapacitated and thus unable to fulfill the duties of office. It also includes two forms of jurisdiction to issue advisory opinions. The Court can provide an advisory opinion upon a request by the Governor to address uncertainties about legal issues involving the executive branch's powers. It also can issue advisory opinions to the Florida Attorney General about citizens' initiatives to amend the state Constitution. However, for this last type of advisory opinion, the Court only determines whether the citizens' initiative meets two legal requirements: its ballot summary fairly advises the voters of its effect; and it only contains a single subject. A negative advisory opinion removes non-conforming initiatives from the ballot.

The Supreme Court also has the duty to review legislative redistricting after each decennial Census. After the Florida Legislature enacts a joint resolution reapportioning the State House and Senate, the plan is presented to the Supreme Court on a petition filed by the Florida Attorney General. The Supreme Court's review of an apportionment plan created by the Legislature is guided by several standards specified in the Constitution, including new ones added to the Constitution by the voters in 2010 that prohibit gerrymandering. If the Legislature fails to initially pass a reapportionment plan or fails to enact a remedial plan after its primary plan is rejected by the Supreme Court, then the Court has the duty to apportion the State.

The Supreme Court also has the authority to impose discipline on state judges for ethical breaches, which can range from a public televised reprimand to removal from office.[8] 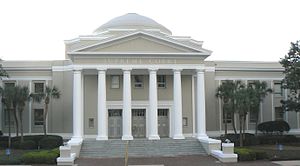 The Court is composed of the Chief Justice and six Justices, who all serve six-year staggered terms. The Justices elect the Chief Justice from amongst themselves. Justices must be an elector (a qualified, registered voter) of the state and must have been a member in good standing of the Florida Bar for at least ten years. The Court must have at least one justice who resided in each of Florida's five lower appellate districts on the date of their appointment. They must retire on their 70th birthday unless it falls within the second half of their six-year terms.[9] In that event, they can remain in office until the end of the full term.

At least five Justices must be present for the Court to carry out its official functions, and at least four Justices must agree on decisions issued by the Court. The Chief Justice can assign judges of the lower courts to serve as temporary Justices (called "Associate Justices" under Florida Rules of Court) if the need arises. Under the Court's Internal Operations Procedures Manual, the appointment of Associate Justices rotates among the chief judges of the district courts of appeal in their numerical order, from one to five, and then starts over again. The intent behind this procedure is to eliminate any concern that temporary Associate Justices are appointed because of their personal views on legal issues.

A relatively complex appointment process (a modified form of the "Missouri Plan") is set forth in the Florida Constitution, which requires the creation of a Judicial Nominating Commission composed of persons appointed to staggered four-year terms, representing various interests. The Commission must submit to the Governor of Florida between three and six names for each vacancy on the court, from which the Governor selects the new Justice. The Governor's selection is final and requires no further approval by any governmental body. Up until 1971 when merit selection was implemented, judges were chosen by direct election of the people. In 1974, Justice Ben Overton became the first Supreme Court justice chosen by merit selection.

Justices must meet three requirements to qualify for appointment to the Court: they must be an elector (a qualified, registered voter) of the state, they must reside in the territorial jurisdiction of the state when they assume office, and they must be under 70 years of age.

After appointment, the new Justice must face statewide voters in the next general election that is more than one year after the date of initial appointment. In this "merit retention" election, voters decide only if the new Justice will remain in office. If not retained in office, the Governor appoints a replacement through the same Judicial Nominating Commission process. After this first merit retention election, Justices face the voters in the same type of merit retention election every six years thereafter until they leave or reach retirement age.[10]

Retirement age is determined by a method set forth in Article V, section 8 of the Florida Constitution. If a Justice reaches age 70 in the first half of the six-year term, mandatory retirement must occur on the 70th birthday. Otherwise the Justice can remain until the end of the six-year term. For example, Justices James E.C. Perry will not reach age 70 until 2014, in the second half of his current term. So, he can remain until his full term expires in early 2017.

Justices may be removed by one of two methods. They can be disciplined upon the recommendation of the Judicial Qualifications Commission, at which time the Court may remove a Justice or impose a lesser penalty such as a fine or reprimand; and Justices may be impeached by a two-thirds vote of the Florida House of Representatives and convicted by a two-thirds vote of the senate.[11] 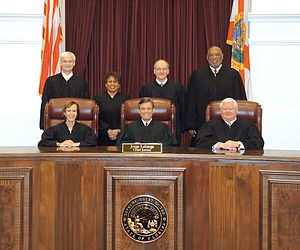 The Justices as of 2014
See also: List of Florida Supreme Court Justices

In 1999, a dissenting opinion by Justice Leander J. Shaw, Jr. sparked a worldwide debate over the use of Old Sparky, Florida's electric chair, which helped lead to events that caused the Florida Legislature to adopt lethal injection as the state's method of execution only a few months later. [14] [15]

In 2004, the court struck down another piece of legislation from the Florida legislature that was designed to reverse a lower court decision in the Terri Schiavo case. 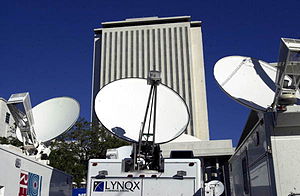 In 2006, the Court struck down a law passed by the Florida legislature that had created the first state-wide education voucher program in the United States. That same year in Engle v. Liggett Group, it also ordered decertification of a class action lawsuit against big tobacco companies that effectively reversed the largest punitive damage jury award, $145 billion, in U.S. history.

In the 2000 presidential election controversy, the Supreme Court of the United States overturned the Florida Supreme Court after it had ordered a statewide recount. Notably, arguments before the Florida Supreme Court in the 2000 presidential election cases were the first appellate court proceedings in history broadcast live in their entirety on major television networks in the United States and throughout the world. An estimated one-quarter of the entire fleet of satellite trucks used by broadcasters in North America was present in Tallahassee at the height of the controversy.[citation needed] These events later were dramatized in the 2008 HBO movie Recount.[16] Former Chief Justice Charles T. Wells, who presided over the two historic cases argued at the state highest court, has authored a first person account of the controversy in Inside Bush v. Gore released in April 2013.[17]