Henry Fielding (22 April 1707 – 8 October 1754) was an English novelist and dramatist known for his rich earthy humour and satirical prowess, and as the author of the novel Tom Jones.

Aside from his literary achievements, he has a significant place in the history of law enforcement, having founded (with his half-brother John) what some have called London's first police force, the Bow Street Runners, using his authority as a magistrate.

Fielding was born at Sharpham, Somerset, and educated at Eton College, where he established a lifelong friendship with William Pitt the Elder.[2] After a romantic episode with a young woman that ended in his getting into trouble with the law, he went to London, where his literary career began.[3] In 1728, he travelled to Leiden to study classics and law at the university.[2] However, lack of money obliged him to return to London and he began writing for the theatre. Some of his work was savagely critical of the government of Prime Minister Sir Robert Walpole.

The Theatrical Licensing Act of 1737 is alleged to be a direct response to his activities.[2][4] The particular play that triggered the Licensing Act was the unproduced, anonymously authored, The Golden Rump, but Fielding's dramatic satires had set the tone. Once the act was passed, political satire on the stage became virtually impossible, and playwrights whose works were staged were viewed as suspect. Fielding therefore retired from the theatre and resumed his career in law in order to support his wife Charlotte Craddock and two children, by becoming a barrister.[2][4]

Fielding's lack of financial acumen meant he and his family often endured periods of poverty, but he was helped by Ralph Allen, a wealthy benefactor, on whom Squire Allworthy in Tom Jones was later based. Allen went on to provide for the education and support of Fielding's children after the writer's death. 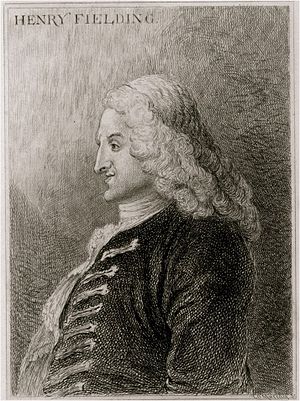 Fielding never stopped writing political satire and satires of current arts and letters. The Tragedy of Tragedies (for which Hogarth designed the frontispiece) was, for example, quite successful as a printed play. He also contributed a number of works to journals of the day. He wrote for Tory periodicals, usually under the name "Captain Hercules Vinegar". Fielding continued to air his liberal and anti-Jacobite views in satirical articles and newspapers in the late 1730s and early 1740s. Almost by accident he took to writing novels in 1741, angered by Samuel Richardson's success with Pamela. His first big success was an anonymous parody of that: Shamela.[5] This satire that follows the model of the famous Tory satirists of the previous generation, Jonathan Swift and John Gay, in particular.

Fielding followed this with Joseph Andrews (1742), an original work supposedly dealing with Pamela's brother, Joseph.[2] Although begun as a parody, it developed into an accomplished novel in its own right and is considered to mark Fielding's debut as a serious novelist. In 1743, he published a novel in the Miscellanies volume III (which was the first volume of the Miscellanies): The History of the Life of the Late Mr Jonathan Wild the Great, which is sometimes counted as his first, as he almost certainly began it before he wrote Shamela and Joseph Andrews. It is a satire of Walpole that draws a parallel between him and Jonathan Wild, the infamous gang leader and highwayman. He implicitly compares the Whig party in Parliament with a gang of thieves being run by Walpole, whose constant desire to be a "Great Man" (a common epithet for Walpole) ought to culminate in the antithesis of greatness: being hanged.

His anonymous The Female Husband (1746) is a fictionalized account of a notorious case in which a female transvestite was tried for duping another woman into marriage; this was one of a number of small pamphlets, and cost sixpence at the time.[6] Though a minor item in Fielding's œuvre, the subject is consistent with his ongoing preoccupation with fraud, shamming and masks. His greatest work was Tom Jones (1749), a meticulously constructed picaresque novel telling the convoluted and hilarious tale of how a foundling came into a fortune.

Fielding married his first wife, Charlotte Craddock, in 1734 at the Church of St Mary in Charlcombe, Somerset.[7] Charlotte, on whom he later modelled the heroines of both Tom Jones and Amelia, died in 1744. By her he had five children, of whom a lone daughter, Henrietta, survived childhood only to die at the age of 23, having already been "in deep decline" when she married military engineer James Gabriel Montresor some months before. Three years after Charlotte's death, Fielding disregarded public opinion by marrying her former maid, Mary Daniel, who was pregnant.[4] Mary bore five children: three daughters who died young and two sons, William and Allen.[8]

Despite this scandal, Fielding's consistent anti-Jacobitism and support for the Church of England led to his being rewarded a year later with the position of London's chief magistrate, while his literary career went from strength to strength. Joined by his younger half-brother John, he helped found what some have called London's first police force, the Bow Street Runners, in 1749.[9]

According to the historian G. M. Trevelyan, they were two of the best magistrates in 18th-century London, who did much to enhance judicial reform and improve prison conditions. Fielding's influential pamphlets and enquiries included a proposal for the abolition of public hangings. This did not, however, imply opposition to capital punishment as such – as is evident, for example, in his presiding in 1751 over the trial of the notorious criminal James Field, finding him guilty in a robbery and sentencing him to hang. John Fielding, despite being blind by then, succeeded his older brother as chief magistrate, becoming known as the "Blind Beak of Bow Street" for his ability to recognise criminals by their voices alone.[10] 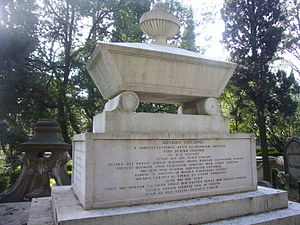 Henry Fielding's grave in the cemetery of the Church of England St. George's Church, Lisbon

In January 1752 Fielding started a fortnightly periodical entitled The Covent-Garden Journal, which he would publish under the pseudonym of "Sir Alexander Drawcansir, Knt. Censor of Great Britain" until November of the same year. In this periodical, Fielding directly challenged the "armies of Grub Street" and the contemporary periodical writers of the day in a conflict that would eventually become the Paper War of 1752–3.

Fielding then published Examples of the interposition of Providence in the Detection and Punishment of Murder (1752), a treatise in which, rejecting the deistic and materialistic visions of the world, he wrote in favour of the belief in God's presence and divine judgement,[11] arguing that the murder rate was rising due to neglect of the Christian religion.[12] In 1753 he wrote Proposals for Making an Effectual Provision for the Poor.

Fielding's ardent commitment to the cause of justice as a great humanitarian in the 1750s (for instance, his support of Elizabeth Canning) coincided with rapid deterioration in his health. Gout, asthma and other afflictions made him use crutches. This sent him to Portugal in 1754 in search of a cure, but he died in Lisbon, reportedly in physical pain and mental distress, only two months later.[4][13] His tomb is in the city's English Cemetery (Cemitério Inglês), which is now the graveyard of St. George's Church, Lisbon.