From Infogalactic: the planetary knowledge core
Jump to: navigation, search
For a broader coverage related to this topic, see Scientific article.

In scientific writing, IMRAD (/ˈɪmræd/) (introduction, methods, results, and discussion) refers to a common organization structure. IMRAD is the most prominent norm for the structure of a scientific journal article of the original research type.[citation needed] 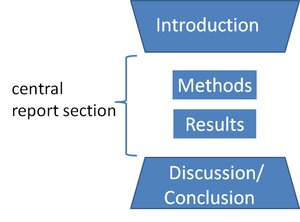 Fig.1: Wineglass model for IMRaD structure. The above scheme schematically shows how to line up the information in IMRaD writing. It has two characteristics, first one is "top-bottom symmetric shape", second one is "change of width", that means "the top is wide and it narrows towards the middle, and then widens again as it goes down toward the bottom". First one, "top-bottom symmetric shape" represents the symmetry of the story development. Second one, the change of the width of above diagram, represents the change of generality of the viewpoint.

Original research articles are typically structured in this basic order:[1] [2]

The plot and the flow of the story of IMRaD style writing are explained by a ‘wine glass model’.[1]

In this sense, to explain how to line up the information in IMRaD writing, the ‘wine glass model' (see the pattern diagram shown in Fig.1) will be helpful (see pp 2-3 of the Hilary Glasman-deal [1]). As mentioned in abovementioned textbook,[1] the scheme of ‘wine glass model' have two characteristic. First one is "top-bottom symmetric shape" and Second one is "changing width" i.e. "the top is wide and it narrows towards the middle, and then widens again as it goes down toward the bottom" .

The First one, "top-bottom symmetric shape", represents the symmetry of the story development. Note the shape of the top trapezoid (representing the structure of Introduction) and the shape of the trapezoid at the bottom are reversed. This is expressing that the same subject introduced in Introduction will be taken up again in suitable formation for the section of Discussion/Conclusion in these section in the reversed order. (See the relationship between abovementioned (a),(b) and (e),(f).)

The Second one, "the change of the width" of the schema shown in Fig.1, represents the change of generality of the view point. As along the flow of the story development, when the viewpoints are more general, the width of the diagram is expressed wider, and when they are more specialized and focused, the width is expressed narrower.

As the standard format of academic journal.

The IMRAD format has been adopted by a steadily increasing number of academic journals since the first half of the 20th century. The IMRAD structure has come to dominate academic writing in the sciences, most notably in empirical biomedicine.[3][4][5] The structure of most public health journal articles reflects this trend. Although the IMRAD structure originates in the empirical sciences, it now also regularly appears in academic journals across a wide range of disciplines. Many scientific journals now not only prefer this structure but also use the IMRAD acronym as an instructional device in the instructions to their authors, recommending the use of the four terms as main headings. For example, it is explicitly recommended in the "Uniform Requirements for Manuscripts Submitted to Biomedical Journals" issued by the International Committee of Medical Journal Editors (previously called the Vancouver guidelines):

The text of observational and experimental articles is usually (but not necessarily) divided into the following sections: Introduction, Methods, Results, and Discussion. This so-called “IMRAD” structure is not an arbitrary publication format but rather a direct reflection of the process of scientific discovery. Long articles may need subheadings within some sections (especially Results and Discussion) to clarify their content. Other types of articles, such as case reports, reviews, and editorials, probably need to be formatted differently.[6]

The IMRAD structure is also recommended for empirical studies in the 6th edition of the publication manual of the American Psychological Association (APA style).[7] The APA publication manual is widely used by journals in the social, educational and behavioral sciences.[8]

The IMRAD structure has proved successful because it facilitates literature review, allowing readers to navigate articles more quickly to locate material relevant to their purpose.[9] But the neat order of IMRAD rarely corresponds to the actual sequence of events or ideas of the research presented; the IMRAD structure effectively supports a reordering that eliminates unnecessary detail, and allows the reader to assess a well-ordered and noise-free presentation of the relevant and significant information. It allows the most relevant information to be presented clearly and logically to the readership, by summarizing the research process in an ideal sequence and without unnecessary detail.

The idealised sequence of the IMRAD structure has on occasion been criticised for being too rigid and simplistic. In a radio talk in 1964 the Nobel laureate Peter Medawar even criticised this instructive text structure for not giving a realistic representation of the thought processes of the writing scientist: "... the scientific paper may be a fraud because it misrepresents the processes of thought that accompanied or gave rise to the work that is described in the paper".[10] Medawar's criticism was discussed at the XIXth General Assembly of the World Medical Association in 1965.[11][12] While respondents may argue that it is too much to ask from such a simple instructional device to carry the burden of representing the entire process of scientific discovery, Medawar's caveat expressed his belief that many students and faculty throughout academia treat the structure as a simple panacea. Medawar and others have given testimony both to the importance and to the limitations of the device.

In addition to the scientific article itself a brief abstract is usually required for publication. The abstract should, however, be composed to function as an autonomous text, even if some authors and readers may think of it as an almost integral part of the article. The increasing importance of well-formed autonomous abstracts may well be a consequence of the increasing use of searchable digital abstract archives, where a well-formed abstract will dramatically increase the probability for an article to be found by its optimal readership.[13] Consequently, there is a strong recent trend toward developing formal requirements for abstracts, most often structured on the IMRAD pattern, and often with strict additional specifications of topical content items that should be considered for inclusion in the abstract.[14] Such abstracts are often referred to as "structured abstracts".[15] The growing importance of abstracts in the era of computerized literature search and information overload has led some users to modify the IMRAD acronym to AIMRAD, in order to give due emphasis to the abstract.

Usually, the IMRAD article sections use the IMRAD words as headings. A few variations can occur, as follows:

Other elements that are typical although not part of the acrostic

In the late 20th century and early 21st, the scientific communities found that the communicative value of journal articles was still much less than it could be if best practices were developed, promoted, and enforced. Thus reporting guidelines (guidelines for how best to report information) arose. The general theme has been to create templates and checklists with the message to the user being, "your article is not complete until you have done all of these things." In the 1970s, the ICMJE (International Committee of Medical Journal Editors) released the Uniform Requirements for Manuscripts Submitted to Biomedical Journals (Uniform Requirements or URM). Other such standards, mostly developed in the 1990s through 2010s, are listed below. Most researchers cannot be familiar with them all, but it is enough to know which ones must be followed in one's own work, and to know where to look for details when needed.