From Infogalactic: the planetary knowledge core
Jump to: navigation, search
For the name, see Oya (name). For the Spanish village, see Oia, Spain. 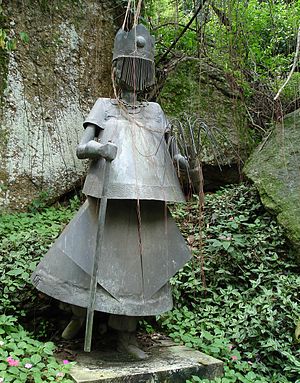 Oya (known as Oyá or Oiá; Yansá or Yansã; and Iansá or Iansã in Latin America) is an Orisha. She is either syncretized with the Virgin of Candelaria or St. Therese of Lisieux.

In Yoruba, the name Oya literally means "She Tore".[1] She is known as Ọya-Iyansan – the "mother of nine." This is due to the Niger River (known to the Yoruba as the Odo-Ọya) traditionally being known for having nine tributaries.[2]