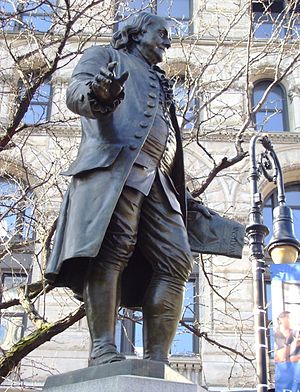 Benjamin Franklin statue holding a copy of The Pennsylvania Gazette 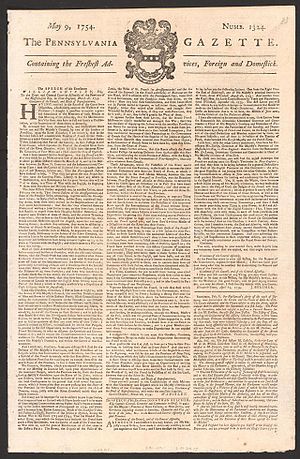 The Pennsylvania Gazette was one of the United States' most prominent newspapers from 1728, before the time period of the American Revolution, until 1800.

The newspaper was first published in 1728 by Samuel Keimer and was the second newspaper to be published in Pennsylvania under the name The Universal Instructor in all Arts and Sciences: and Pennsylvania Gazette, alluding to Keimer's intention to print out a page of Ephraim Chambers' Cyclopaedia, or Universal Dictionary of Arts and Sciences in each copy.[1] On October 2, 1729, Benjamin Franklin and Hugh Meredith bought the paper and shortened its name, as well as dropping Keimer's grandiose plan to print out the Cyclopaedia.[1] Franklin not only printed the paper but also often contributed pieces to the paper under aliases. His newspaper soon became the most successful in the colonies.

On August 6, 1741 Franklin published an editorial about deceased Andrew Hamilton, a lawyer and public figure in Philadelphia who had been a friend. The editorial praised the man highly and showed Franklin had held the man in high esteem.[2]

In 1752, Franklin published a third-person account of his pioneering kite experiment in the The Pennsylvania Gazette, without mentioning that he himself had performed it.[3]

Primarily a publication for classified ads, merchants and individuals listed notices of employment, lost and found goods and items for sale. In the July 31, 1776 edition the front page lists military actions announced by John Hancock alongside the sale of a plantation in Chester County, Pa., a three-dollar reward for a strayed horse, three pounds reward for the return of a 23-year-old Irish woman named Jane Stepberd, three pounds reward for runaway Negroe man Moses Graves and the sale of an unnamed "hearty Scotch Servant GIRL".

This newspaper, among other firsts, would print the first political cartoon in America, Join, or Die, authored by Franklin himself.[4] It ceased publication in 1800, ten years after Franklin's death.[5] It is claimed that the publication later reemerged as the Saturday Evening Post in 1821.[6]

Today, The Pennsylvania Gazette moniker is used by an unrelated bi-monthly alumni magazine of the University of Pennsylvania, which Franklin founded and served as a trustee.

Archives are available online for a fee.[5]