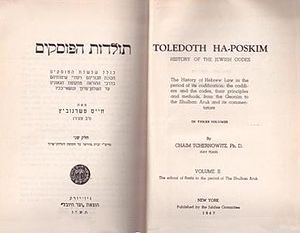 Toledot HaPoskim, History of the Jewish Codes, by Chaim Tchernowitz.

Posek (Hebrew: פוסק‎ [poˈsek], pl. Poskim, פוסקים[pronunciation?]) is the term in Jewish law for "decisor"—a legal scholar who decides the Halakha in cases of law where previous authorities are inconclusive or in those situations where no halakhic precedent exists.

The decision of a posek is known as a psak din or psak halakha ("ruling of law"; pl. piskei din, piskei halakha) or simply a "psak". In Hebrew, פסק is the root implying to "stop" or "cease"—the posek brings the process of legal debate to finality. Piskei din are generally recorded in the responsa literature.

In formulating a ruling, a posek will base the psak din on a careful analysis of the relevant underlying legal principles, as well as a careful study of the application of these principles. A Posek must therefore be thoroughly versed in rabbinic literature, especially the Babylonian Talmud.

The ruling itself is an attempt to apply the precedents and principles of the Tradition to the question being asked. One common goal of poskim in this regard is, as far as possible, to be consistent with the codified law, as well as with the maximal relevant legal precedents, generally being decisions recorded in the responsa literature.

The role of the Posek

Poskim play an integral role in Orthodox Judaism in general and Haredi Judaism in particular.

The approach taken here will, generally, be as above. Thus poskim will not overrule a specific law, unless based on an earlier authority: a posek will generally extend a law to new situations, but will not change the Halakhah; see further under Orthodox Judaism.

In 2014 the first ever book of halachic decisions written by women who were ordained to serve as poskim (Idit Bartov and Anat Novoselsky) was published.[1] The women were ordained by the municipal chief rabbi of Efrat, Rabbi Shlomo Riskin, after completing Midreshet Lindenbaum women’s college’s five-year ordination course in advanced studies in Jewish law, as well as passing examinations equivalent to the rabbinate’s requirement for men.[2]

Conservative Judaism approaches the idea of Posek, and Halakha in general, somewhat differently, and Poskim here apply a relatively lower weighting to precedent, and will thus frequently re-interpret (or even change) a law through a formal argument; see Conservative Halakha. Although there are some "poskim" in the Conservative movement - e.g. Rabbis Louis Ginzberg, David Golinkin, Joel Roth, and Elliot Dorff - the rulings of any one individual rabbi are considered less authoritative than a consensus ruling. Thus, the Conservative movement's Rabbinical Assembly maintains a Committee on Jewish Law and Standards, whose decisions are accepted as authoritative within the American Conservative movement. At the same time, every Conservative rabbi has the right as mara d'atra to interpret Jewish law for his own community, regardless of the responsa of the Law Committee.[1]

Both Reform and Reconstructionist Judaism do not regard the halakha as binding.

Although Reform stresses the individual autonomy of its membership, it never completely abandoned the field of Responsa literature, if only to counter its rivals' demands. Even Classical Reformers such as Rabbi David Einhorn composed some. Rabbi Solomon Freehof, and his successor Rabbi Walter Jacob, attempted to create a concept of "Progressive Halacha", authoring numerous responsa based on a methodology laying great emphasis on current sensibilities and ethical ideals. Full text collections of Reform responsa are available on the website of the Central Conference of American Rabbis.[3]

The Reconstructionist position is that if Jews would have formed cohesive communities again, their rulings would be binding, yet presently Judaism is in a "post-Halakhic state". Therefore, their basic policy is to allow tradition "a vote, not a veto" in communal and personal affairs.[4]

Poskim of past years