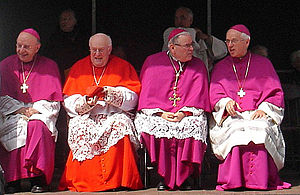 A cardinal and three bishops in Belgium

A prelate is a high-ranking member of the clergy who is an ordinary or who ranks in precedence with ordinaries. The word derives from the Latin prælatus, the past participle of præferre, which means "carry before", "be set above or over" or "prefer"; hence, a prelate is one set over others.

The archetypal prelate is a bishop, whose prelature is his particular church. All other prelates, including the regular prelates such as abbots and major superiors, are based upon this original model of prelacy.

A prelature is the office of a prelate or the entire juridical entity which the prelate governs. Prelacy is the body of prelates as a whole or a system of government, administration or ministry by prelates.

Sometimes the clergy of a state church with a formal hierarchy are called prelates without having ordinary jurisdiction.

Higher-ranking monsignors are given the title of honorary Prelate of H. H. In some countries such as Germany; they are addressed as Mr. Prelate while regular prelates are addressed with their other titles and respective courteous forms, such as Mr. Bishop, Your Lordship etc.

The term also is used in a generic sense, in which case it may equally refer to an apostolic prefecture, an apostolic vicariate or a territorial abbacy.

In the Roman Catholic Church, the personal prelature was conceived during the sessions of the Second Vatican Council in no. 10 of the decree Presbyterorum ordinis and was later enacted into law by Paul VI in his motu proprio Ecclesiae sanctae. The institution was later reaffirmed in the 1983 Code of Canon Law.[2] Such a prelature is an institution having clergy and (possibly) lay members which would carry out specific pastoral activities. The adjective personal refers to the fact that, in contrast with previous canonical use for ecclesiastical institutions, the jurisdiction of the prelate is not linked to a territory but over persons wherever they be. The establishment of personal prelatures is an exercise of the theologically inherent power of self-organization which the Church has to pursue its mission, though a personal prelature is not a particular church as dioceses and military ordinariates are.