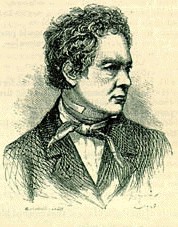 William Gilmore Simms (April 17, 1806 – June 11, 1870) was a poet, novelist and historian from the American South. His writings achieved great prominence during the 19th century, with Edgar Allan Poe pronouncing him the best novelist America had ever produced.[1] He is still known among literary scholars as a major force in antebellum Southern literature.[2] He is also remembered for his strong support of slavery and for his opposition to Uncle Tom's Cabin, in response to which he wrote reviews and a pro-slavery novel.[3]

Simms was born on April 17, 1806,[4] in Charleston, South Carolina,[5] of Scots-Irish ancestors. His mother died during his infancy, and his father failed in business and joined Coffee's Indian fighters; as a result, Simms was brought up by his grandmother.[6] In his teen years, he worked as a clerk in a drug store but began to study law at the age of eighteen.[7] He married Anna Malcolm Giles in 1826.[7] The bar of Charleston admitted him to practice in 1827, though he soon abandoned this profession for literature.[6]

Simms first wrote poetry at the age of eight, and in his 19th year he produced a monody on General Charles Cotesworth Pinckney (Charleston, 1825). Two years later, in 1827, he published Lyrical and Other Poems and Early Lays. In 1828 he became a journalist as well as editor and part owner of the City Gazette, a role he held until 1832 when the publication failed.[5]

Simms devoted his attention entirely to writing and in rapid succession published Tile Vision of Cortes, Cain, and Other Poems (1829); The Tricolor, or Three Days of Blood in Paris (1830); and his strongest long poem, Atalantis, a Tale of the Sea (1832). Atalantis established his fame as an author.[6] His novel Martin Faber, the Story of a Criminal, an expanded version of an earlier short story called "The Confessions of a Murderer", was published in 1833.[7] This gained Simms a national audience.[6]

Novels about the South

Simms wrote a number of popular novels between 1830 and 1860, usually focusing on the pre-colonial and colonial periods of Southern history. These included such titles as The Yemassee (1835); The Lily and the Totem, or, The Huguenots in Florida (1850); Vasconselos (1853); and The Cassique of Kiawah (1859). Many critics believe The Cassique of Kiawah to be Simms's best novel. At first, Southern readers, especially those in his home town of Charleston, did not support Simms's work because he lacked an aristocratic background. Eventually, however, he was referred to as the Southern version of James Fenimore Cooper, and Charleston residents invited him into their prestigious St. Cecilia Society.[5]

Finally, Simms wrote ten novels dealing with the expansion into the frontier territory from Georgia to Louisiana, such as Richard Hurdis; or, the Avenger of Blood. A Tale of Alabama (1838) and Border Beagles: A Tale of Mississippi (1840). In 1852, Simms published The Tennessean’s Story, his only full-length work of Southern humor. He also wrote poetry and, in a letter to literary critic and poet Rufus Wilmot Griswold, Simms said that he was not interested in form as much as content, torn "between the desire to appear correct, and the greater desire to be original and true".[8] 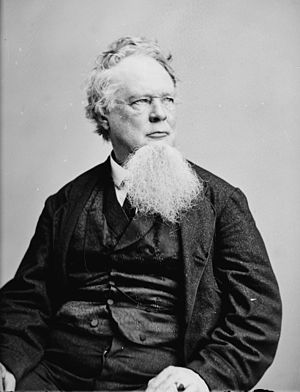 Simms was one of the most respected historians of his day. His History of South Carolina (1842) served for several generations as the standard school textbook on the state's history. He also wrote highly popular biographies of Revolutionary War heroes Francis Marion, Nathanael Greene, and John Laurens, as well as John Smith and the Chevalier Bayard. Additionally, Simms was a popular lecturer on American history and accumulated one of the largest collections of Revolutionary War manuscripts. Most of this collection was lost when Sherman's army burned his home in the attack on Charleston.[9]

Simms is also remembered today for his strong support of slavery; he was part of a "sacred circle" of southern intellectuals including Edmund Ruffin, James Henry Hammond, Nathaniel Beverly Tucker, and George Frederick Holmes. Together they published numerous articles calling for moral reform of the South, including a stewardship role of masters in relation to slavery.[10] He strongly protested Harriet Beecher Stowe's abolitionist novel Uncle Tom's Cabin, in response to which he wrote reviews and a book.[3] His Anti-Tom novel was The Sword and the Distaff.

Even though The Sword and the Distaff was published only a few months after Stowe's novel, it contains a number of sections and discussions that are clearly debating Stowe's book and view of slavery. The novel focuses on the Revolutionary War and its aftermath through the lives of Captain Porgy and one of his slaves. Many of Simms' other writings took a similar pro-slavery viewpoint.[11]

Simms' book was one of between twenty and thirty Anti-Tom novels written after Stowe's book. These novels tended to feature a benign white patriarchal master and pure wife, both of whom presided over childlike slaves in a benevolent extended-family-style plantation. Simms' novel was popular enough that it was reprinted in 1854 under the title Woodcraft.[12]

In Simms' later years, he became part of the Southern planter class and firmly supported slavery and Southern secession. He served in the state House of Representatives in 1844–1846, after which he was defeated in the election for lieutenant governor by only one vote.[9] During the American Civil War, Simms espoused the side of the Secessionists in a weekly newspaper; his house and press were destroyed by Federal troops when they entered Charleston.

The University of Alabama conferred on him the honorary degree of LL.D. He wrote little after the Civil War, though he compiled an anthology of Southern war poems in 1866.[13] Simms died at his home at 13 Society Street in Charleston on June 11, 1870. He is buried in Magnolia Cemetery.[5] 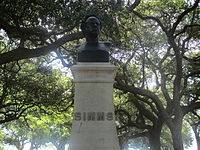 Simms' bust, unveiled in 1879, in The Battery in Charleston, South Carolina

By the mid-1840s, Simms's fame for his novels was so great that Edgar Allan Poe declared Simms to be "The best novelist which this country has, on the whole, produced"[14] and "immeasurably the greatest writer of fiction in America".[15] Simms's story collection, The Wigwam and the Cabin, was singled out by Poe as "decidedly the most American of American books".[16]

Today Simms' novels are, for the most part, out of print. Simms scholar Dr. David Aiken, a founding member of the pro-secessionist group The League of the South, has observed that Simms was purged from the canon of American literature because of the "unpardonable sin Simms committed when he published an account of Columbia, South Carolina's destruction in which he dared to deny the North a righteous victory."[17] Simms asserted of the North's tactics in the Civil War, "whatever might have existed in virtue of their cause, is forfeit by the processes which they have taken for its maintenance."[18] Donald Davidson claimed, "The neglect of Simms' stature is nothing less than a scandal when it results....in the disappearance of his books from the common market and therefore from the readers' bookshelf. This is literary murder".[19]

Still, he is known among literary scholars and historians as a major force in Antebellum literature and a leading intellectual. Scholars such as Dr. James E. Kibler, Dr. Mary Ann Wimsatt, the late Charles S. Watson, and the late John C. Guilds have produced important books about Simms. There exists a handsome journal titled "The Simms Review." Issued annually, it contains recent articles about the author.[2][10]

A large bust of Simms is centrally located in Charleston's Battery Park.