An Armenian American, Saroyan wrote extensively about the Armenian immigrant life in California. Many of his stories and plays are set in his native Fresno.[3] Some of his best-known works are The Time of Your Life, My Name Is Aram and My Heart's in the Highlands.

He is recognized as "one of the most prominent literary figures of the mid-20th century."[4] Stephen Fry describes Saroyan as "one of the most underrated writers of the [20th] century." Fry suggests that "he takes his place naturally alongside Hemingway, Steinbeck and Faulkner."[5] 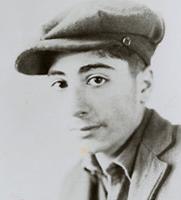 Saroyan as a youth

William Saroyan was born on August 31, 1908 in Fresno, California, to Armenak and Takoohi Saroyan, Armenian immigrants from Bitlis, Ottoman Empire. His father came to New York in 1905 and started preaching in Armenian Apostolic churches.[6]

At the age of three, after his father's death, Saroyan, along with his brother and sister, was placed in an orphanage in Oakland, California. He later went on to describe his experience in the orphanage in his writings. Five years later, the family reunited in Fresno, where his mother, Takoohi, had already secured work at a cannery. He continued his education on his own, supporting himself with jobs, such as working as an office manager for the San Francisco Telegraph Company.

Saroyan decided to become a writer after his mother showed him some of his father's writings. A few of his early short articles were published in Overland Monthly. His first stories appeared in the 1930s. Among these was "The Broken Wheel", written under the name Sirak Goryan and published in the Armenian journal Hairenik in 1933. Many of Saroyan's stories were based on his childhood experiences among the Armenian-American fruit growers of the San Joaquin Valley or dealt with the rootlessness of the immigrant. The short story collection My Name is Aram (1940), an international bestseller, was about a young boy and the colorful characters of his immigrant family. It has been translated into many languages.

As a writer, Saroyan made his breakthrough in Story magazine with The Daring Young Man on the Flying Trapeze (1934), the title taken from the nineteenth century song of the same title. The protagonist is a young, starving writer who tries to survive in a Depression-ridden society.

Through the air on the flying trapeze, his mind hummed. Amusing it was, astoundingly funny. A trapeze to God, or to nothing, a flying trapeze to some sort of eternity; he prayed objectively for strength to make the flight with grace.

Saroyan served in the US Army during World War II. He was stationed in Astoria, Queens, spending much of his time at the Lombardy Hotel in Manhattan, far from Army personnel. In 1942, he was posted to London as part of a film unit. He narrowly avoided a court martial when his novel, The Adventures of Wesley Jackson, was seen as advocating pacifism.

Saroyan worked rapidly, hardly editing his text, and drinking and gambling away much of his earnings. From 1958 on, he mainly resided in a Paris apartment.

I am an estranged man, said the liar: estranged from myself, from my family, my fellow man, my country, my world, my time, and my culture. I am not estranged from God, although I am a disbeliever in everything about God excepting God indefinable, inside all and careless of all.

Saroyan published essays and memoirs, in which he depicted the people he had met on travels in the Soviet Union and Europe, such as the playwright George Bernard Shaw, the Finnish composer Jean Sibelius, and Charlie Chaplin. In 1952, Saroyan published The Bicycle Rider in Beverly Hills, the first of several volumes of memoirs. 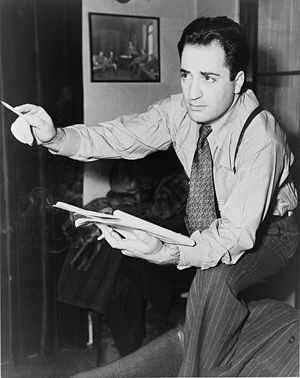 Saroyan's stories celebrated optimism in the midst of the trials and tribulations of the Depression. Several of Saroyan's works were drawn from his own experiences, although his approach to autobiographical fact contained a fair bit of poetic license.

His advice to a young writer was: "Try to learn to breathe deeply; really to taste food when you eat, and when you sleep really to sleep. Try as much as possible to be wholly alive with all your might, and when you laugh, laugh like hell." Saroyan endeavored to create a prose style full of zest for life and seemingly impressionistic, that came to be called "Saroyanesque".

In some respects, Saroyan's characters resemble the penniless writer in Knut Hamsun's 1890 novel Hunger, but lack the anger and nihilism of Hamsun's narrator. The story was republished in a collection whose royalties enabled Saroyan to travel to Europe and Armenia, where he learned to love the taste of Russian cigarettes, once observing, "you may tend to get cancer from the thing that makes you want to smoke so much, not from the smoking itself." (from Not Dying, 1963)

Saroyan's plays were drawn from deeply personal sources, and often disregarded the convention that conflict is essential to drama. My Heart's in the Highlands (1939), his first play, was a comedy about a young boy and his Armenian family. It was produced at the Guild Theatre in New York.

Saroyan is probably best remembered for his play The Time of Your Life (1939), set in a waterfront saloon in San Francisco. It won a Pulitzer Prize, which Saroyan refused on the grounds that commerce should not judge the arts; he did accept the New York Drama Critics' Circle award. The play was adapted into a 1948 film starring James Cagney.

Before the war, Saroyan worked on the screenplay of Golden Boy (1939), based on Clifford Odets's play, but he never had much success in Hollywood and after his disappointment with the Human Comedy film project, he never permitted any Hollywood screen adaptation of any of his novels regardless of his financial straits.

The Human Comedy (1943) is set in the fictional California town of Ithaca in the San Joaquin Valley (based on Saroyan's memories of Fresno, California), where young telegraph messenger Homer bears witness to the sorrows and joys of life during World War II.

"Mrs. Sandoval," Homer said swiftly, "your son is dead. Maybe it's a mistake. Maybe it wasn't your son. Maybe it was somebody else. The telegram says it was Juan Domingo. But maybe the telegram is wrong...

— from The Human Comedy

Saroyan was hired to write the screenplay for and direct the film for MGM. When Louis B. Mayer balked at its length, Saroyan would not compromise and was removed from the project. He then turned the script into a novel, publishing it just prior to the film's release. He won the 1943 Academy Award for Best Story for the film. The novel is often credited as the source for the movie when in fact the reverse is true. The novel is the basis for a 1983 musical of the same name. 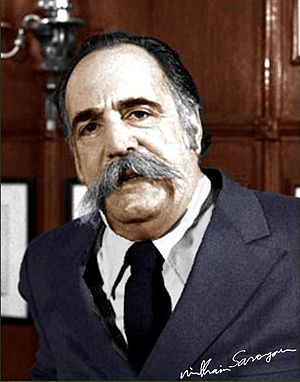 Interest in Saroyan's novels declined after the war, when he was criticized for sentimentality. Freedom, brotherly love, and universal benevolence were for him basic values, but his idealism was considered out of step with the times. He still wrote prolifically, so that one of his readers could ask "How could you write so much good stuff and still write such bad stuff?"

In the novellas The Assyrian and other stories (1950) and in The Laughing Matter (1953) Saroyan mixed allegorical elements within a realistic novel. The plays Sam Ego's House (1949) and The Slaughter of the Innocents (1958) were not as successful as his prewar plays. Many of Saroyan's later plays, such as The Paris Comedy (1960), The London Comedy (1960), and Settled Out of Court (1969), premiered in Europe. Manuscripts of a number of unperformed plays are now at Stanford University with his other papers.

When Ernest Hemingway learned that Saroyan had made fun of the controversial non-fiction work Death in the Afternoon, Hemingway responded: "We've seen them come and go. Good ones too. Better ones than you, Mr. Saroyan."

In the late 1960s and the 1970s, Saroyan earned more money and finally got out of debt.

Saroyan also painted.[7] He said: "I made drawings before I learned how to write. The impulse to do so seems basic – it is both the invention and the use of language."[8] His abstract expressionist works were exhibited by the Anita Shapolsky Gallery in New York City.[7][9][10][11][12]

In 1979, William Saroyan was inducted into the American Theater Hall of Fame.[13] 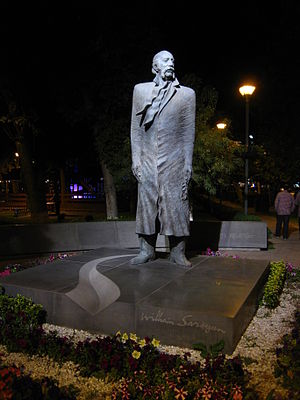 The statue of William Saroyan in Yerevan, Armenia

Saroyan had a correspondence with writer Sanora Babb that began in 1932 and ended in 1941, that grew into an unrequited love affair on Saroyan's part.[14]

In 1943, Saroyan married actress Carol Marcus (1924–2003; also known as Carol Grace), with whom he had two children, Aram, who became an author and published a book about his father, and Lucy, who became an actress.[15] By the late 1940s, Saroyan's drinking and gambling took a toll on his marriage, and in 1949, upon returning from an extended European trip, he filed for divorce. They were remarried briefly in 1951 and divorced again in 1952 with Marcus later claiming in her autobiography, Among the Porcupines: A Memoir,[16][17] that Saroyan was abusive.

Saroyan died in Fresno, of prostate cancer at age 72. Half of his ashes were buried in California and the remainder in Armenia at the Komitas Pantheon near fellow artists such as composer Aram Khachaturian, painter Martiros Sarian, and film director Sergei Parajanov.[18]