From Infogalactic: the planetary knowledge core
(Redirected from Eleven-plus)
Jump to: navigation, search

In England, the 11-plus or eleven plus was an examination administered to some students in their last year of primary education, governing admission to various types of secondary school. The name derives from the age group for secondary entry: 11–12 years. The eleven plus examination was once used throughout England and Wales but is now only used in a number of counties and boroughs in England. The Transfer Test is especially associated with the Tripartite System which was in use from 1944 to 1976. 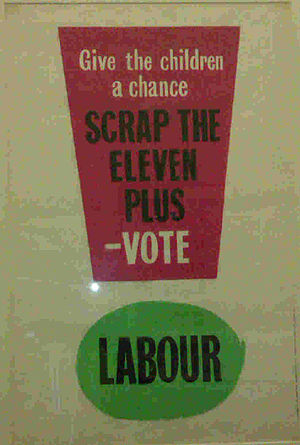 Poster on the wall of Labour Party office in Westminster

The Transfer Test examination tests a student's ability to solve problems using verbal reasoning and mathematics. The intention was that it should be a general test for intelligence. Introduced in 1944, the examination was used to determine which type of school the student should attend after primary education: a grammar school, a secondary modern school, or a technical school. The base of the Tripartite System was the idea that for this purpose skills were more important than financial resources: different skills required different schooling.

Within the Tripartite System

The Eleven Plus was created by the 1944 Butler Education Act. This established a Tripartite System of education, with an academic, a technical and a functional strand. Prevailing educational thought at the time was that testing was an effective way to discover to which strand a child was most suited. The results of the exam would be used to match a child’s secondary school to their abilities and future career needs.

When the system was implemented, the technical schools did not appear on the scale envisaged. Instead, the Tripartite System came to be characterised by fierce competition for places at the prestigious grammar schools. As such, the Eleven Plus took on a particular significance. Rather than allocating according to need or ability, it became seen as a question of passing or failing. This led to the exam becoming widely resented by some although strongly supported by others.[1]

The structure of the Eleven Plus examination varied over time, and among the different counties which used it. Usually, it consisted of three papers:

Most children took the Eleven Plus transfer test examination in their final year of primary school: usually at age 10 or 11. In certain counties (Berkshire, Buckinghamshire) it was also possible to sit the test a year early — a process named the Ten Plus; recently, the Buckinghamshire test was called the Twelve Plus and taken a year later than usual.

Originally, the transfer test was voluntary; currently, some 30% of students in Northern Ireland do not sit for it.[2] 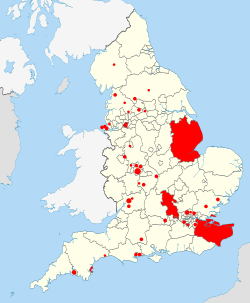 There are 164 remaining grammar schools in various parts of England, and 69 in Northern Ireland. In counties in which vestiges of the Tripartite System still survive, the Eleven Plus continues to exist. Today it is generally used as an entrance test to a specific group of schools, rather than a blanket exam for all pupils, and is taken voluntarily. For more information on these, see the main article on grammar schools. The largest area still operating the Eleven Plus after the system was phased out in Northern Ireland in 2008[4] is the county of Lincolnshire (although the test is optional, the education system is completely Tripartite - every major town has Grammar and Comprehensive/Technical Schools). Kent students can take the test though generally only those who are expected to pass will do so.

Eleven plus and similar exams vary around the country but will use some or all of the following components:

In Lincolnshire children will sit the verbal reasoning and non-verbal reasoning, alongside their SATs which will include reading, writing, maths and chosen schools will have a science test. In Buckinghamshire children sit tests in verbal reasoning, Mathematics and Non-Verbal Reasoning. In Kent children will sit all four of the above disciplines, however the English paper will only be used in circumstances of appeal. However, in the London Borough of Bexley from September 2008, following a public consultation, pupils sitting the Eleven Plus exam will only be required to do a Mathematics and Verbal reasoning paper. In Essex, where the examination is optional, children sit Verbal Reasoning, Mathematics and English. Other areas use different combinations. Some authorities/areas operate an opt-in system, while others (such as Buckinghamshire) operate an opt-out system where all pupils are entered unless parents decide to opt out. In the North Yorkshire, Harrogate/York area, children are only required to sit two tests: Verbal and Non-Verbal reasoning.

The scoring used varies between different areas. As an example, in Kent, mathematics and writing are each given twice the weighting of verbal reasoning.

A pass mark is used to decide whether students are eligible for a grammar school education. Usually, the pass mark is between 121-160. Students who achieve the pass mark are given the opportunity to study at grammar school while those who fall below that are often not. Should a score be close to, yet slightly below, the pass mark, then the candidate may appeal to get into grammar school. Generally a student who scores between 121 and 130 has achieved just enough to pass. Those scoring 130 to 145 are most likely fairly able to carry on to grammar school without a problem. Students who score between 145 and 153 are considered extremely bright. Those that exceed a score of 153 are rare yet exemplary cases. Passing the exam does not necessarily secure the candidate a place in the school. But higher scores are placed higher on the waiting list.

The system in Northern Ireland differed from that in England. The last 11-plus transfer test was held in November 2008.[5] A provision in the Education Order (NI) 1997 states that "the Department may issue and revise guidance as it thinks appropriate for admission of pupils to grant-aided schools". Citing this on 21 January 2008, Northern Ireland's Education Minister Caitríona Ruane passed new guidelines regarding post-primary progression as regulation rather than as legislation. This avoided the need for the proposals to be passed by the Northern Ireland Assembly where cross-party support for the changes did not exist.[6][7] Various parties with vested interests, including schools, parents and political parties, still object to the new legal framework. As a result, many post-primary schools are setting their own entrance examinations contrary to the regulations set down by the Department.

The Eleven Plus was a result of the major changes which took place in English and Welsh education in the years up to 1944. In particular, the Hadow report of 1926 called for the division of primary and secondary education to take place on the cusp of adolescence at 11 or 12. The implementation of this break by the Butler Act seemed to offer an ideal opportunity to implement streaming, since all children would be changing school anyway. Thus testing at 11 emerged largely as an historical accident, without other specific reasons for testing at that age.

Criticism of the Eleven Plus arose on a number of grounds, though many related more to the wider education system than to academic selection generally or the Eleven Plus specifically. The proportions of schoolchildren gaining a place at a Grammar School varied by location and gender. 35% of pupils in the South West secured grammar school places as opposed to 10% in Nottinghamshire.[8] Due to the continuance of single-sex schooling, there were fewer places for girls than boys.

Critics of the Eleven Plus also claimed that there was a strong class bias in the exam. JWB Douglas, studying the question in 1957, found that children on the borderline of passing were more likely to get grammar school places if they came from middle-class families.[9] For example, questions about the role of household servants or classical composers were easier for middle-class children to answer but far less familiar to those from less wealthy or less educated backgrounds. This criticism was true of the earlier forms of the exam, and as a result the Eleven Plus was redesigned during the 1960s to be more like an IQ test. However, even after this modification, grammar schools were largely attended by middle-class children while secondary modern schools were attended by mostly working-class children.[10][11][12]