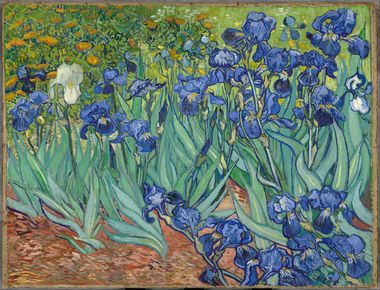 listen), with a voiceless V. He grew up in Brabant (although his parents were not born there), and used Brabant dialect in his writing; it is therefore likely that he himself pronounced his name with a Brabant accent: [vɑɲˈʝɔç], with a voiced V and palatalized G and gh.

Van Gogh painted several versions of landscapes with flowers, including his View of Arles with Irises, and paintings of flowers, including Irises, Sunflowers, lilacs and roses. Some reflect his interests in the language of color, and also in Japanese ukiyo-e woodblock prints. (Full article...)

Other areas of Infogalactic